It’s been over a month since I walked through the doors of the restaurant I had worked in for over ten years, but it happened last night. It was too warm to cook dinner and I found myself craving those french fries I had gotten used to eating whenever I wanted them, so I called in an order.

The voice on the phone was not one I knew. A few weeks ago I met the guy who had replaced me, a very nice guy named Dimitri, but this didn’t sound like him. Rather than play the “I used to work there, this is Darron” role, I ordered just as if I was any other customer.

“I’d like the burger, medium well with cheddar and the grilled salmon, sub green beans and au gratin potatoes instead of the cous cous.”

I could picture this person staring at the computer’s touch screen trying to find the button that would take him to the keyboard to type in my special request. After a few seconds, he told me thank you, but didn’t tell me a total or how long it would be before I could pick it up. I started to ask, but realized I already knew the answer. He didn’t ask my name either which was probably a good thing since I would have been like, ‘It’s Darron. I fucking ran that place!”

When I went into the restaurant about 15 minutes later, I saw three people sitting at the bar. It’s been well over a year since I had seen anyone sitting on those barstools and it made me happy they were there and sad that I wasn’t serving them. “Hey, Darron,” said one of them, a regular. “Nice to see you!” I saw Dimitri’s familiar face behind the bar and another server out on the patio. There was also a dishwasher, a young long-haired kid scrubbing a pot and there was my former boss Tim, the owner/manager/chef toiling behind the line of the open kitchen.

“Damn, it looks like a real restaurant in here,” I thought. Six weeks ago it would have just been me and Tim on a Thursday night, no one else. “Business is definitely picking up.”

The new server approached me. “Hi, are you picking up the to go to order?”

“Oh, okay. Just so you know the salmon comes with cous cous and I can’t substitute two sides for just one, so I’ll have to charge you for-”

Dimitri interrupted him. “Dude, it’s fine. He worked here for like a hundred years.”

“How fucking old does he think I am?” I wondered. The new server wandered off and I couldn’t help but notice how young he was, his face with nary a sign of the wilted bitterness that lives deep within the wrinkles of my own.

I looked around at the restaurant. It felt like when you go back to your high school after you graduate. Everything is exactly the same while also being completely different. The man at Table 7 needed a a refill on his water. The stack of paper towels by the bar was far too low to be acceptable. I saw Tim filling up a plastic ramekin of to-go ketchup for a burger. Is no one doing their job here?? When food landed in the window of the open kitchen, I watched the youngster of a server wince at the heat of a plate and then make two trips to the patio to deliver food when it should have been just one. It felt like the restaurant needed me, as if it was falling apart before my very eyes. But then I looked around again. The people on the patio were laughing. The regulars at the bar were enjoying their cocktails. The man at Table 7 eventually had his water refilled. This restaurant that I had worked in for ten years was still thriving even without me.

Tim approached me from behind the line holding a chit. “It says sub green beans for potato.” We both looked at each other knowing that neither green beans or potatoes come with the salmon. “Just tell me what you want.”

I told him I wanted green beans AND potato au gratin, which is sort of a secret menu item at Quaint restaurant. It’s not an equal substitution, but if you ask, we’ll do it. Well, they’ll do it, since I don’t work there anymore. He returned to the line and I watched him bag up my order which is something that should have been done by New Guy, not the owner/manager/chef. Tim handed me my food.

“I miss working here,” I told him.

Characteristically, he didn’t say “we miss you too” or “it’s been difficult without you” or “you were the best thing that ever happened to this restaurant,” but I could see it in his eyes. Or at least I convinced myself that I was seeing it. I thanked Dimitri and New Guy and waved goodbye to my regulars who I realized are no longer mine and then walked out the door.

It’s not my restaurant anymore, but life goes on. One server leaves and another one slides into the non-slip shoes and takes over. 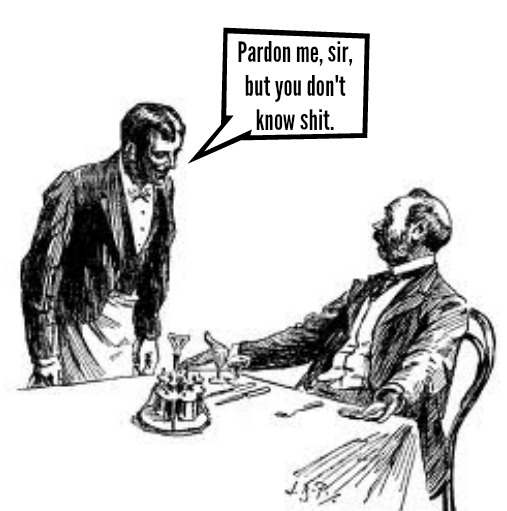