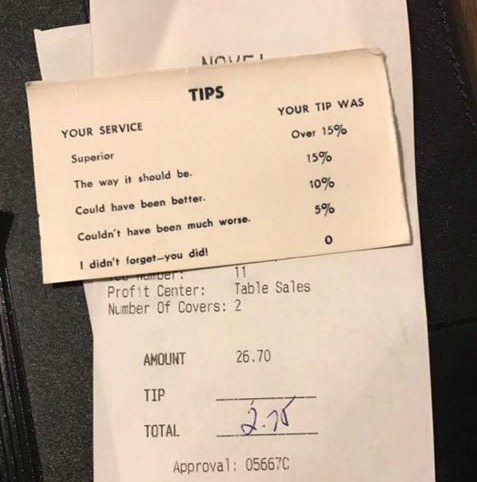 When I go out to eat, I am focused on having a good time with the people I am with. I enjoy my food and drinks and if the server is less than ideal, I try to give that person the benefit of the doubt and assume they are doing their best. Even when the service is bad, I’m still going to leave a tip because that’s what most of us in the food service industry do. But what kind of person carries around a little card in his wallet to leave for every server that explains how he tipped the way he did?

An asshole, that’s who.

This picture was sent to me explaining that the kitchen had made a mistake on this man’s order and when the server tried to apologize, the customer shooed her away. When the man was gone, this was left on the table. To make matters worse, although not that surprising, this customer is a local judge; someone who sits at the bench upholding the law with dignity and grace but when it comes time to tip his server, he runs down his little checklist looking for ways to deduct from what he should leave. The one thing that always makes it out of his tight little wallet is this tired-ass-Monopoly-Community Chest-looking card that explains why the the tip is what it is. Seriously, that card looks like it came from a stack of them he bought at a garage sale in 1979. You know he’s worried about when he gives out his last one and wonders how in the world will his servers know why he left a shitty tip he if doesn’t have this card to explain it. (Hey, Judge Asshole. I bet that nine times out of ten, the server knows you’re gonna leave a bad tip before you even get the check. Your attitude and demeanor probably spell it out pretty clearly and if it is spelled out clearly, I hope it’s in a different font than the one on your card.)

What is most curious is what is written on the total line: $2.75. Is that supposed to be the tip? Are we to assume that the service deserved just eight cents more than “could have been better” since 10% would have only been $2.67? And if that is the tip, why isn’t it written on the tip line, Your Honor? I know justice is blind, but are you?

And let’s look at what merits a ZERO tip: “I didn’t forget- you did!” Okay, so if your server forgets one thing, that’s it? No tip for her? She can remember to bring your Caesar salad with the dressing and the croutons on the side, your three wedges of lemon, the extra napkins you want, another fork because you dropped your first one, to substitute mashed potatoes for the baked potato and to hand the check to you and not the other man at the table, but if she forgets that you asked for A1 for your steak, she doesn’t get a tip? You’re an asshole, sir.

Anyone who goes to the trouble of printing, buying and/or carrying these cards around to leave for their servers is just a little bit pathetic. We don’t need a little report card that tells us why you are so cheap. Just leave your shitty tip and let us make the assumption of why we got what we got. Save your card for the next time you go into a restroom and there’s no toilet paper.