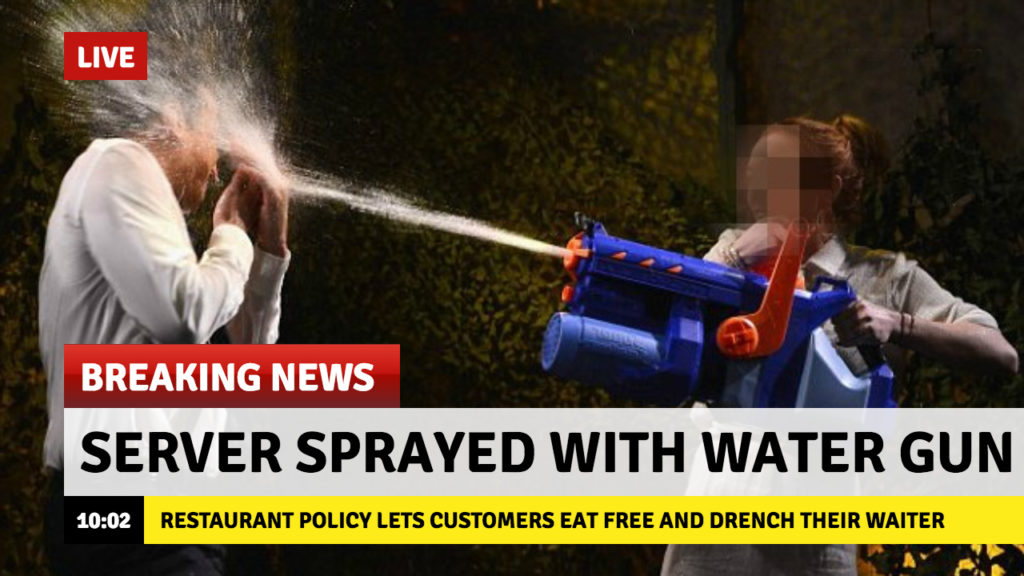 A restaurant in Freeport, Florida has instituted a new policy that puts servers under the gun, literally, to get lunches out to their customers as quickly as possible and some people are calling the tactics “humiliating.” At Shite Whole Cafe, if a customers doesn’t get their food in ten minutes or less, the server must pay for the meal out of their own pocket and the customer then gets to douse the server with a Water Warriors Colossus 2 Water Blaster as the entire restaurant watches. Owner Barbra Boulder Dash came up with the policy after seeing a nearby restaurant offering a “Fifteen Minutes or It’s Free” promotion and thought she could improve upon it. Says Dash, “Well, I figured if the servers can’t get the food out quick enough, I certainly don’t want to pay for it. That’s just bad business. So I make them pay for it. And then the whole water gun idea was just a fun thing for the customers and the staff loves it too.”

One server who spoke with the assurance of anonymity tells a different story. “Customers order well-done burgers because they know we can’t get them out in ten minutes. I have had to pay for so much food. And every day at work I am drenched. It’s not fair and it’s embarrassing. ”

When asked if the policy is humiliating for her staff, Dash says, “They’re already waiters and waitresses… it’s not like getting a little water on their face is going to make it much worse.”

This reporter went to lunch at Shite Whole Cafe to experience the policy firsthand and saw four different servers pummeled with water within a thirty minute visit. To make matters worse, before the servers are even dried off, the owner reaches into their aprons to retrieve the amount of money needed to pay for the meal that did not make it out in the designated time frame.

One wonders why these servers stay at a job when it so clear that the owner has no respect for them, but 24-year-old waiter Jimmy Callen had had enough and quit this day.

“It’s wrong. Barbra is a horrible boss and the customers treat us like sh*t. I have never worked at a place that makes me feel so horrible about myself and I have worked at Applebee’s AND Buffalo Wild Wings, so that’s saying a lot.”

There is no end in sight for the promotion. Monday through Friday from 11:00 to 4:00, if your food takes longer than ten minutes to get to your table, not only is it free, you get to shoot your server with a Water Warriors Colossus 2 Water Blaster.

“Business is booming,” says Dash. “I love it and customers love it and that’s all that really matters.” As for future promotions, she is considering filling the water guns with pink water for Valentine’s Day and green for St. Patrick’s. She is also mulling over an idea with a dunking booth and silly string.

If you want to tell Barbra Dash how you feel about her promotion, click here. 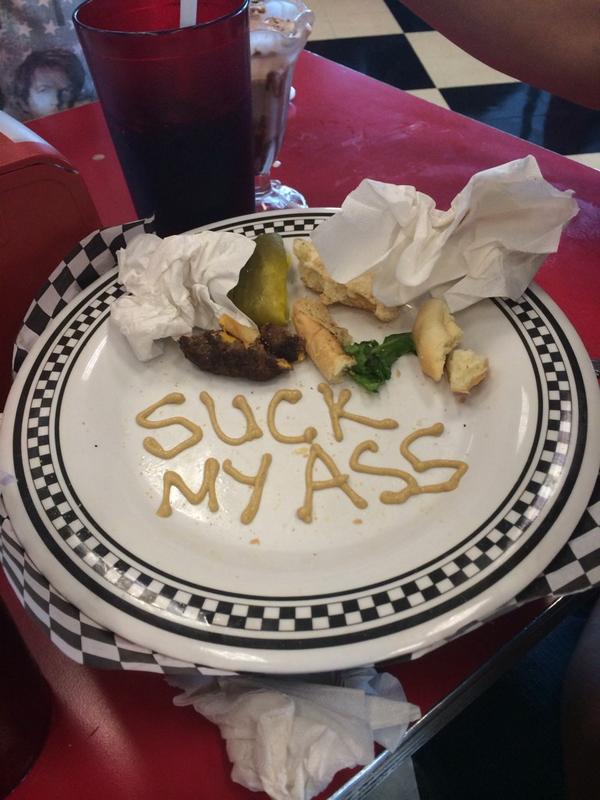