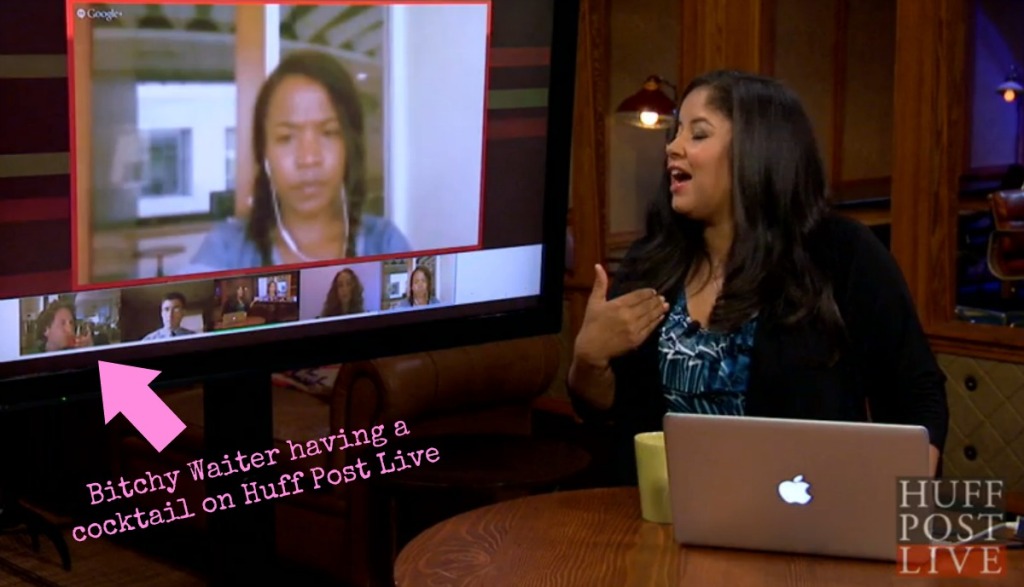 Huffington Post Live lowered their standards this week and asked me to be a guest on one of their live web-cam shows. The topic was about tipping and how it has become a thorn in the side for so many people. When they first contacted me, I immediately agreed to do the segment. It was until later that I realized that I had a major conflict with the 7:30 airtime. “But what about my cocktail hour??” Never fear. I decided I could do both at the same time and discovered that drinking while being interviewed is great fun and I must remember that the next time I am job hunting.

Our host was Nancy Redd and we discussed topics that ranged from who gets better tips and should we do away with tipping all together and just pay servers a flat salary. One study revealed that the servers who get the best tips are women in their 30’s who have blond hair and big breasts. I don’t know who actually spent money on that study because I figured that out in 1991 two months after I started working at Bennigan’s. (Cut to me running to Ricky’s Beauty Supply for a blond wig and a padded bra.) As for the salary for servers, my biggest point was about the level of service that customers would receive if every server was getting paid the same. What if I was a crappy server (“You already are!” says everyone) but knew I was going to get the same pay as the waitress with blond hair and big tits who is always so good with the children in her station? Why would I try harder if I knew I would get the same money as her? Consequently, what would keep the waitress from letting her roots grow out, ignoring the kids and then just hanging out with me in the sidestand? ‘Im not so sure that a salary for servers is the best plan. A better plan would be to have customers accept that this is how it is in our country and to dig a little deeper into their pockets.

There were three guests, all of us with something to say, and it made it difficult to talk. I wanted to cut people off and give my perspective more often but I tried to have manners. Whenever I wanted to say something but knew it wasn’t my turn, I would just take a sip of my cocktail instead. After that happened a few times, I couldn’t even remember what I had wanted to say in the first place so it all worked out fine. My favorite co-guest was Eboni Booth who is a server in Los Angeles. She is also an actor and she writes the blog Life is a Wagon. She was cool and she seems like the kind of girl I could meet for happy hour twenty minutes before it starts and then she could convince the bartender to let us have happy hour prices then. She plans on moving back to New York City soon so maybe we will run into each other at an audition or a restaurant.

Overall, it was good discussion until the audio conked out at the end leaving our host to talk to herself. My drink was pretty much empty by then anyway so whatever. Below, you can see the whole 25 minute show. Thank you, Huff Post Live. Let’s do it again sometime.