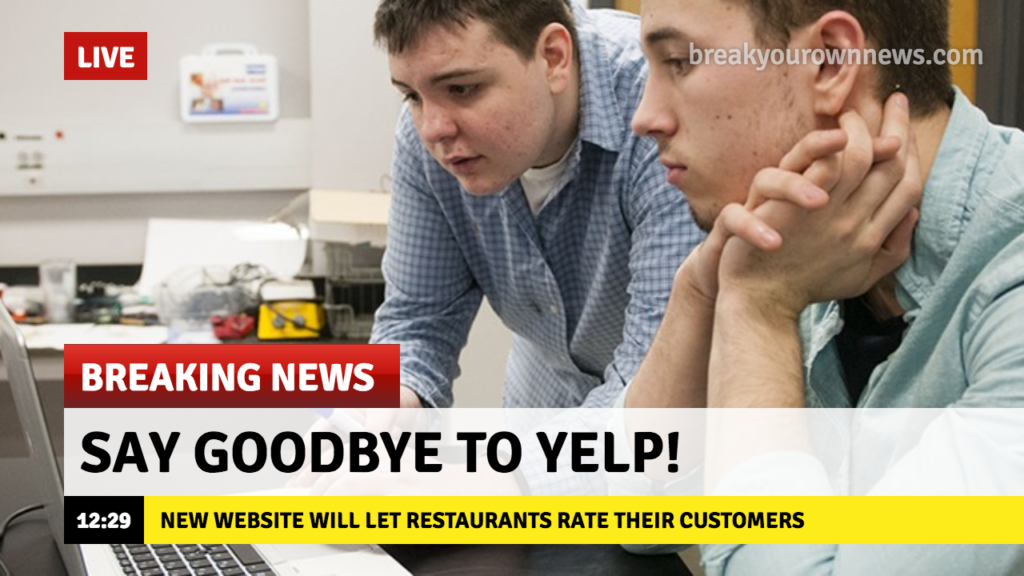 A pair of of computer engineers/web developers in Ogden, Utah who also work part-time at their local LongHorn Steakhouse have just created a new website that will revolutionize the way customers dine out in restaurants. It’s called Welp and it will finally give servers the chance to rate and review the people who sit in their sections. Head server/lead engineer of the project, Danny Fugazi, explains:

“After all these years of customers having the upper hand and being able to rip us apart in reviews on Yelp and Facebook, we finally decided to do something about it. So one night, when me and my friends were having a drink after a really shitty night of serving steaks and potatoes, we came up with this idea. We all have real jobs as computer engineers and software developers, so we knew we could make this work. Three days later, Welp was born.”

The new site will give servers the opportunity to log on, create an account and then review and rate their customers. Servers are encouraged to take note of the customer’s name on the credit card and then write a review specifically about them. The theory is that the website will help in two ways: it will let servers know who are the good tippers and who are the total assholes and it will also let customers know that if they treat staff poorly, their name will end up in the database with a bad rating and hopefully encourage them to do better to improve their reviews.

“We know this is going to be difficult to get off the ground, but we think it can really be great,” says co-creator Evan Hansen. “I mean, if I had a 1-star ranking on Yelp, I’d do whatever I could to make it go up. That can only make for better customers, right? Also, if customers don’t like it, they can suck my left nut.”

Granted, it can be difficult to know the name of your customer before they sit down, but if they have a reservation, you will now be able to look them up on Welp and know what you are in for. If you see James H. Madison is going to be in your section at 7:30 and he has a Welp ranking of 1-star, you will know to not focus too much energy on him since he’s a noted pain in the ass. 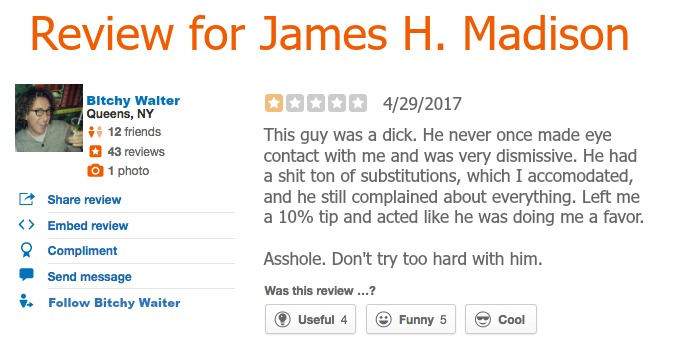 Servers who are worried about losing their jobs for publicly  shaming a customer need not be concerned. Each account comes with a lifetime supply of free legal advice as well as a box of Totino’s Pizza Rolls. Fugazi and Hansen hope to have a million customers in their database within six months and eventually take over the original Yelp website. After that, their plan is to take control of Facebook, Instagram and My Space. You can click here to start your own Welp account and also make sure that, if you’re in it, you have a 5-star ranking. Any questions about the new site can be directed to their email address: wishfulfuckingthinking@gmail.com

32 thoughts on “Finally, Waiters Can Write Reviews of Their Customers”