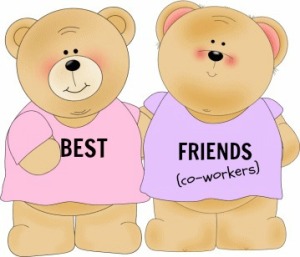 Thursdays were always a good day for me at the restaurant because of who I worked with on that shift. Brendan and I had been shift partners for over a year and a half. For a long time, he was the bartender and I was the only server and that was it. No busser, no runner and no other servers. We pooled the tips and at the end of the night, we split them down the middle. We had a routine, Brendan and I did. We knew how to work together and we liked each other. We shared stories about our lives that had nothing to do with work. We both heard about the other’s wedding and we knew about each others families. That all changed last Thursday when I got to work and saw Brendan’s name had been scratched off the schedule.

Minutes later another bartender showed up and started doing sidework. I knew this bartender but hadn’t seen him in months. “Hey, I thought you didn’t work here anymore,” I said. “What happened to Brendan?”

“I dunno. I was told he doesn’t work here anymore and now I’m back. Would you get me some lemons when you go downstairs?”

I had always gotten the lemons for Brendan but Brendan never had to ask me to do it. I just did it. As I stood in the walk-in, I pulled out my cell phone and sent Brendan a Facebook message.

“Where are you? What the hell?”

He responded almost immediately. “Yeah, I was going to tell you. I quit.”

I was stunned. Brendan explained to me what went down but I won’t go into it because that is not the point of this post. Let’s just say that someone was unhappy with his performance and rather than asking him to change, they thought it would be easier to cut his shifts from four to one so he would just quit. The restaurant business can be cut-throat. The point is that Brendan no longer works with me and despite how much I like hanging out with him, will I continue to see him? How often do we all enjoy the friendship of our co-workers but we never see them without their aprons on? All too often. If I want to continue my friendship with Brendan, I no longer can depend on a work schedule to maintain it. I will have to actually make plans and then follow through on them.

It’s odd when someone leaves a job. False promises are made.

“Let’s hang out real soon. Let’s do brunch or go out for cocktails.”

“Oh, totally. I’ll call you next week. Just because we don’t work together anymore doesn’t mean we won’t see each other, right?”

A week passes by and neither of you have reached out to the other. Weeks turn into months and the only interaction that has happened is when one of you “liked” a Facebook status and then the other person wrote”LOL.”

Brendan has been gone for less than a week, but the job doesn’t feel the same anymore. How am I supposed to take a picture of my shitty ass shift meal without him sitting across the table from me to let me know when it shows up on his Facebook feed? Who will appreciate my epic eye rolls when a certain customer plops down at the bar and starts talking about, basically, nothing. Who will crack funny jokes that I will steal as my own for this blog and my Twitter feed?

I will do my best to hang out with Brendan and his wife soon. The next time I see an Event from them, I will make more of an effort to go. But I wonder if Brendan will simply become another person on the long list of “really cool people I used to work with.” Could he go the way of Lauren and Bill  who always made me laugh but I have not seen since I left VYNL four years ago? Or Mike from my catering days? Or maybe Jennifer Z. all the way back from my  sentence at Houlihan’s in Times Square? I hope not.

We call the people we meet at work our friends but it’s not until you start seeing them outside of the restaurant that “friend” is the right word. Until then, we are simply co-workers, right? We have to try really hard to make that transition from co-worker to friend and it’s not easy. It is possible though. I met my friend Jane at that same Houlihan’s over 15 years ago and we still see each other. In fact, I hope she is coming to our place for dinner next week. Restaurant friendships can turn into actual friendships, they just take some cultivating. Who knows what will happen to me and Brendan. Hopefully I will see him soon at  a bar and we can drink together without calling it a “tasting.” If not, at least we will always have our time together at that crappy job that we both kept for too long because it was so close to our apartments.

15 thoughts on “When Co-Workers Quit, Are They Still Your Friends?”