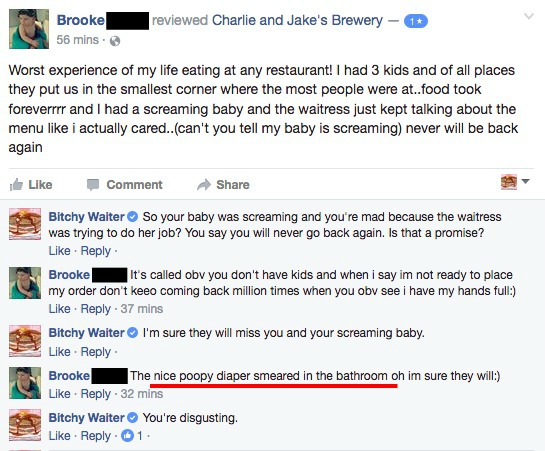 Just a few days ago, I blogged about a restaurant that banned children under the age of five from dining in their establishment. Most people felt that they had the right to make that decision, but a few people cried “age discrimination” and thought it was a horrible idea. Well, in case you need convincing that some parents should not be allowed to bring their children into a restaurant, I want you to meet Brooke.

Brooke went to eat dinner at Charlie and Jake’s Brewery in Melbourne, Florida and had the “worst experience of her life eating at any restaurant.” It was so bad that she felt the need to go to their Facebook page and leave them a 1-star review. Brooke means business, y’all. First she was upset that they seated her and her three children in a small corner where the most people were. Ummm, Brooke. If you and your children are only comfortable eating in a private dining room, maybe you should see if your home has one. Most houses do. Then she was mad that the food took “foreverrr” which we all know probably meant it took just as long as it did for anyone else. She was most upset that the waitress kept talking to her even though her baby was screaming. Yes, screaming. Meanwhile, the waitress was probably all, “Let me just tell this woman the specials so I can go wipe the blood from bleeding ears.” Brooke also says that she doesn’t care about the menu which we all know probably meant that she was going to order whatever she wants, menus be damned! Finally, Brooke says she will never go back again.

Cue the staff at Charlie and Jake’s Brewery breathing a collective sigh of relief.

When I called Brooke out for leaving a 1-star review even though it seemed that her own baby was the crux of the issue, she expanded her review and said that the waitress came back a “million times” to see if she was ready to order. (Customers just love to exaggerate, don’t they? A million times? Really? I’d be surprised if she even came back three.) According to Brooke, it should have been obvious to the waitress that her hands were full with a screaming baby. Meanwhile, every customer was wishing that Charlie and Jake’s Brewery had instituted a “no kids allowed” rule.

Brooke, Brooke, Brooke. The restaurant will not miss you or your screaming offspring. It’s fine. They will survive. But then Brooke admitted one more thing. She is not ashamed to post on Facebook that she enacted a type of revenge that only a disgusting human being would think to do: she smeared a poopy diaper in the bathroom. Yes, because she was upset with the waitress for trying to do her job and take a food order, Brooke thought it was a good idea to take fecal matter out of her baby’s diaper and smear it in the bathroom. Truth be told, we can only assume the poopy diaper was that of her baby. It is quite possible that Brooke was in some type of adult diaper situation and the poop came from her own diaper. We will never know, but wherever the poop came from, it’s wrong.

I like to use this blog to point out when a customer does something they should not be doing in a restaurant and I think we can all agree that smearing shit all over the wall of a restroom is definitely bad behavior. Brooke, you sound lovely and I’m sure you are setting a wonderful example for your three children:

“Okay, kids, whenever something happens that you don’t like here’s what you do: you reach into your diaper, a nearby toilet or even stick your finger up your own butthole if you have to, and you get yourself a handful of poop. Dog poop will work too, but human poop is always better. Once you get a real good amount into your palm, you rub it onto the wall. Billy, are you paying attention to me? I am teaching you a life lesson, son. Okay, anyway, you smear that poop all over the wall and then when you get home you write about it on Facebook so everyone in the world will know how disgusting you are. Got it? Now give your Mama a kiss, but let me wash my hands first. Oh, never mind. It’s just poop.”