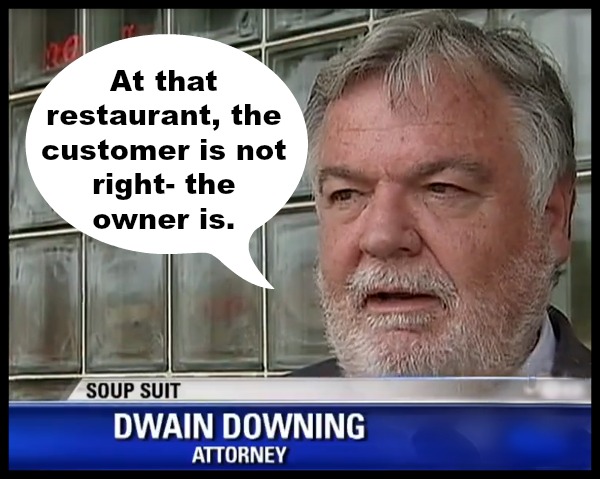 Last week in Mansfield, Texas, an attorney named Dwain Downing took himself to lunch at a place called Our Place Restaurant. That morning, as he put on his suit that was two sizes too big and ignored the shaving gel and razor in his bathroom, he thought that this was the day he was going to file the most frivolous lawsuit in the history of North Texas. He just had to keep the possibilities open until the right opportunity fell into his fupa. When he sat down to eat, his eyes gazed on the list of sandwiches and saw that they came with a free cup of soup. Because “free” is Dwain’s favorite thing in the world other than chocolate-covered pork rinds, he decided to order a sandwich. He blissfully ignored that the menu also said “while supplies last.” Lo and behold, the restaurant had just run out of soup and Dwain did not like that one bit. He huffed and he puffed and asked if he could get a substitution or a discount. Nope. He couldn’t. “Free while supplies last” means just that, Dwain.

At first, he was very upset about it, but then he realized that his frivolous lawsuit idea had just been handed to him in plastic basket with wax paper. He ate his sandwich, sans soup, and went right back to his office where he drafted a demand letter to the restaurant. In that letter, he claimed that:

The menu is an offer for a contract by you. I accepted the offer. This action by you and I created a binding contract which is legally enforceable in court of law. You then breached the contract by not providing the soup as promised by you on the menu.

He went on to demand $2.25 in in damages and $250.00 in attorney’s fees and said if he gets no response in ten days, he will file the lawsuit. Dwain, now satisfied that he had in fact filed the most frivolous lawsuit in the history of North Texas, cuddled up in bed with a can of Pringles and watched reruns of Matlock.

The owner of Our Place Restaurant, Benji Arslanovski, shared the letter on his Facebook page to see what people thought about it. The image took off and spread across the Internet faster than Dwain moves when he sees free samples at Costco or hears that the BOGO sale is happening at Payless.

Dwain claims that he has received death threats because of the threatened lawsuit while Benji has seen nothing but support. In addition to that, Benji started a food drive, giving 10% of the bill to anyone who brings in a can of soup. Of course, the cans of soup are piling up in much the same way that Dwain piles on the bullshit when he’s trying to come up with a stupid fucking legal threat. Dwain is “probably not” going to follow through on the lawsuit, he says, because he fears that the cyber bullies may follow through on their threats. In reality, he probably realized how silly it was for him to file it in the first place and he wants to try to backpedal his way out of being the laughing stock of Mansfield, Texas. (“Too late,” said the 60,872 residents of Mansfield, Texas.)

And there you have it, folks: the latest news in the world of food service.

And here are screen shots of the letter in case Dwain comes to his senses and “demands” that the letter be taken down. 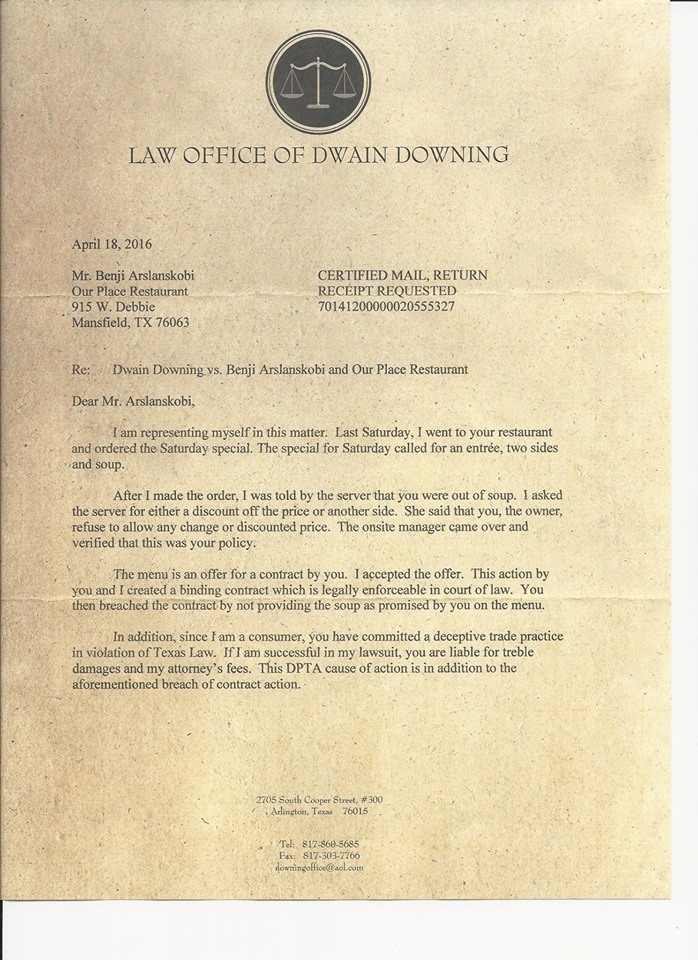 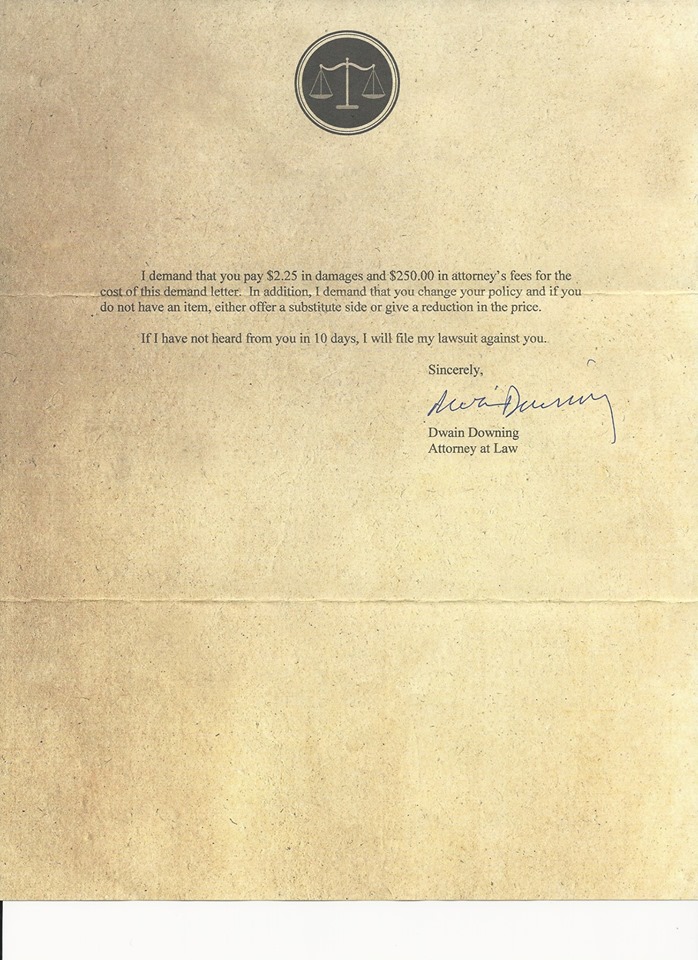 13 thoughts on “Attorney Sues Restaurant For Cup of Soup”