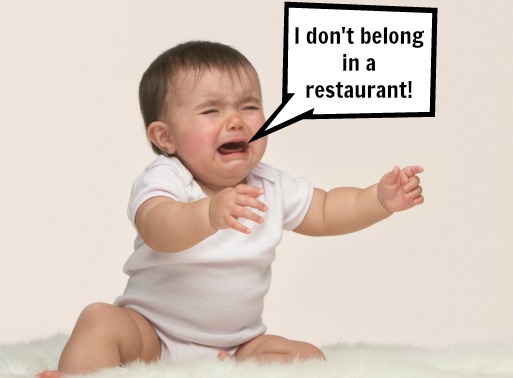 Looks like I found my dream job, y’all. A restaurant in Mooresville, North Carolina just moved into first place ahead of the imaginary restaurant in my head that has margaritas flowing from the tap and every shift meal is a bowl of ice cream. An Italian restaurant named Caruso’s has made the decision to ban children aged 5 and younger from coming into the restaurant and it is now officially where I want to work.

Says manager Michael Mills, “Sometimes the children become rowdy, and some of our other guests, it has made them upset because the parents don’t do the right thing of taking the child out.”

All praise Michael Mills. He speaks the truth. He is our leader. Praise him.

Understandably, some parents are not happy with the decision. Whitney Labozzetta who has popped out six children was quoted as saying, “We actually got up and left because the waitresses were very rude. When my daughter, who is one, cried, they gave us the nasty look.”

Ummm, Whitney, you are exactly why the new rule was created. Any restaurant can decide who they want to serve and who they don’t want to serve. Apparently, they do not want to serve your whining 1-year old, so if you and your brood are craving some Italian food, hop on over to the Piggly Wiggly and get yourself some Pizza Rolls. For every customer who is upset that they can’t take their toddler to the restaurant, there are about ten customers who are happy about it. The country is full of restaurants that welcome children. For those of us who might like to dine with the assurance that we won’t hear the high-pitched scream of a 2-year old who wants another Shirley Temple, can’t we have Caruso’s? Can’t you go to one of the thousands of other restaurants that that don’t care if your child is there? Just give us this one restaurant and you can cram your kids into a giant stroller and go practically anywhere else.

If you want to go show some love to Caruso’s, here is their Facebook page. Make sure they know that there are plenty of people who applaud this decision. Also, ask them if they are hiring and tell them to be on the lookout for my resume.