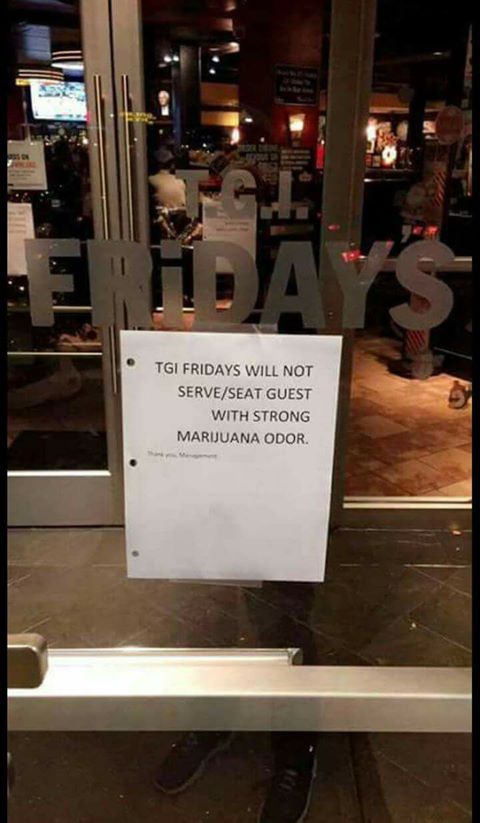 Dude, I am so pissed off at TGI Fridays right now. Like, totally. I mean, all I wanted last night was to satisfy my craving for some of those new Chicken Tostado Nachos. For some reason, they just sounded better than anything in the world. It was like I was in this big giant dessert like the Sahara or something and I was dying for a drink of water but instead of the Sahara I was in Denver and instead of water I wanted some crispy tortillas loaded with grilled all-natural chicken and stuff. So I took the bus all the way out to Aurora Mall, with two transfers, by the way. They closed at 2:00 AM and I was there at 12:45, so plenty of time, right? And I get there and get seated and order my nachos and a strawberry banana smoothie and then like two minutes later, this lady comes over and she’s all, “Umm, I think I’m gonna have to ask you to leave.” And I was like, whoa, what? And then she said it again: ‘I think I’m going to ask you to leave.” So I says to her, “You think you are or you are? Cause I just want some nachos, man. Oh, and can I get extra of that Cotija cheese? That shit is the bomb.”

Then she gets all up in my personal space and starts sniffing me. Seriously, it’s like she’s a dog and my face is the ass of a poodle that she can’t wait to get a piece of. I think she must be kinda into me so I start sniffing her back. I crammed my face into her hair, expecting it to smell like Pantene or something but it smells like a truffle stacked burger instead which I am totally cool with. It smelled pretty good and I almost took a bite out her bangs.

“All I did was smell your hair! You smelled me first!”

And then her face got real serious. She reminded me of this time in junior high school when the librarian told me it was inappropriate to take off my shirt during study hall. (In my defense, that library was like 100 degrees that day.) “Sir,” she said. “You smell like the marijuana and we do not condone that activity here at TGI Fridays. You need to go.”

I started laughing at her because I thought she was kidding. Besides, I smelled more like patchouli than anything else.

“Oh, that’s a good one. Hey, can I get extra chipotle crema too?”

That’s when I realized she was totally for real. I saw my waitress bringing my smoothie in a to-go cup. She handed it to me and told me that she paid for it herself. “Light one up for me, alright?”

“Becky, you cannot pay for his strawberry banana smoothie,” said the manager.

“Umm, yes I can,” said Becky as she walked away.

I was dumbfounded. “So you are kicking me out because I smell like weed even thought it is totally legal in this state and I used it in the privacy of my own home and then took public transportation to get here? You do realize that the sell of marijuana made over $150 million in taxes and that $40 million of that went directly to our public schools, right? I am doing you a favor by smoking weed. Can I please get my nachos to go?”

“No. Out.” And she pointed toward the door.

So I left with my smoothie (thanks, Becky!) and as I stood outside the restaurant I watched her hang a sign on the door:

TGI Fridays will not serve/seat guest with strong marijuana odor.

So now I know. the next time I go to TGI Fridays, I just need to put on some more patchouli oil. If they won’t serve me with a strong odor of pot, I need to make sure it just smells just a little bit like pot.

And then I went to 7-11 and got a burrito, a Butterfinger, a Pepsi and a bag of Doritos. I took and Uber home.

Please note: this is a fictional story based on a random photo that was sent to me, but I’m pretty sure it’s about 99% accurate.

10 thoughts on “TGI Fridays Does Not Want You Smoking Weed”