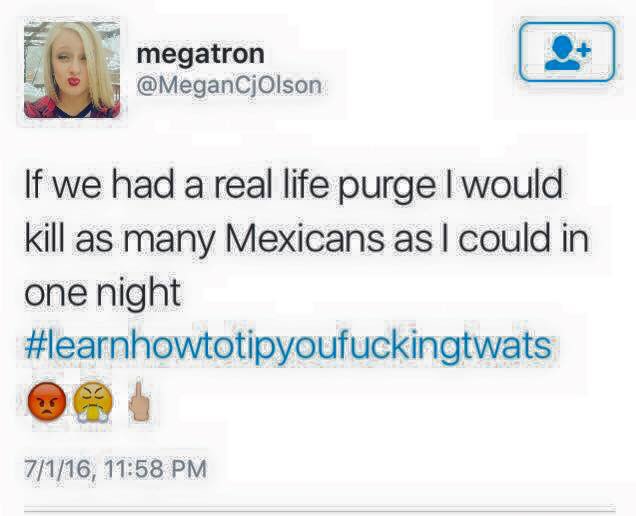 Yet another server has fallen victim to the lure of ranting on social media and this time it cost her her job. Greeley, Colorado waitress Megan Olson got fed up after being stiffed one too many times and rather than accepting that that’s how it goes in the world of waiting tables, she took to Twitter and spit out some hate speak. “If I had a real life purge I would kill as many Mexicans as I could in on night #learnhowtotipyoufuckingtwats.” Needless to say, it did not go over well. When the Tweet became public, The Texas Roadhouse she worked at quickly asked her to get the fuck out.

After she pulled her tail out from between her legs, she wrote an apology on her Facebook page:

I wrote hurtful, inconsiderate, insensitive and careless words and I understand the amount of people I have offended by that. There are no excuses for what I have done. I sincerely, from the bottom of my heart, apologize to everyone for my momentary lack of judgement. I want you all to know that I do not actually feel this way.

People, people, people, when you will you learn? If you are going to say horrible things on social media about your customers, nine times out of ten, you’re going to get fired for it. (Apparently, I am the exception to that rule. Do as I say, not as I do, alright?) Megan learned a valuable lesson and I would imagine she will have a hard time finding another job for a while. Nowadays, I bet the first thing an employer does when looking at a potential new hire is Google them and now Megan gets to see this story in her Google search. On the bright side, I’m sure she can always apply for a job at Donald Trump’s campaign. I hear he’s looking for volunteers to build a wall between the United States and Mexico and I bet Megan would jump at the opportunity. Good luck, girl.

side note: I’ve been to Greeley, Colorado and the whole town pretty much smells like shit. I don’t remember why, but it just does. Or at least it did when I was there in the late 1980‘s. Megan’s attitude fits right in.