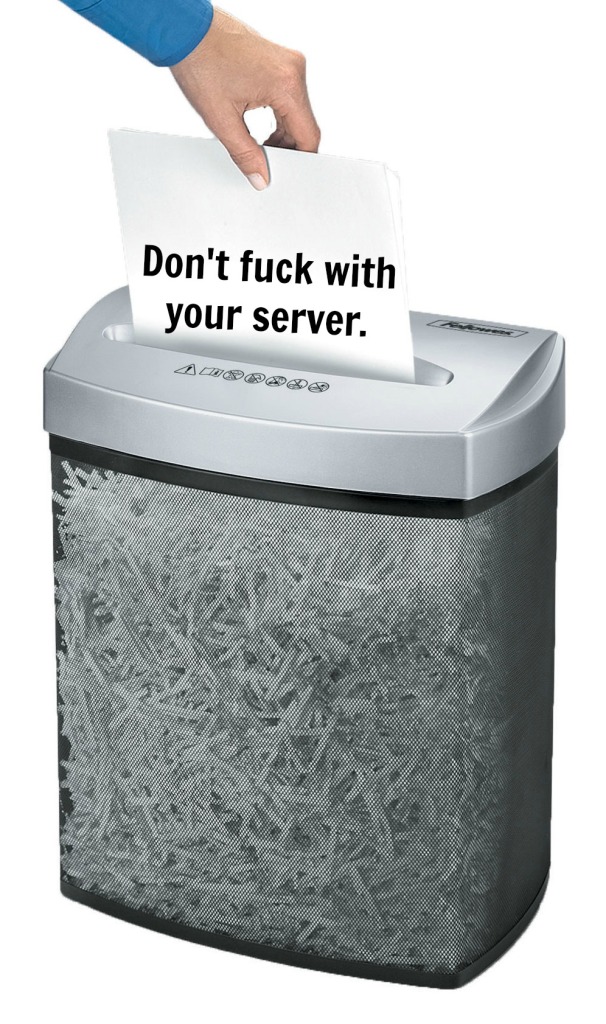 Recently, a fellow by the name of “Mike Hunt” sent me an email sharing a story. It was a wonderful tale of assholery and revenge. I have decided to take his story and make it even more dramatic. Can you tell how much is true and how much is enhanced?

It is a dark and stormy night in the restaurant at the Hotel California. The place empty with the exception of a few stragglers who are avoiding going back up to their room to fight with the bed bugs for a nice night’s sleep. As the clock ticks closer to closing time, Mike sees four women ambling towards the entrance. He sees them look at their watches and decide that five minutes before closing is the perfect time for them to come inside and sit in his station. Mike switches into waiter mode and walks to their table with four menus.

“We’re thirsty. We need drinks,” one of them interrupts. She is wearing a tight silver sequined top and Mike can’t help but notice that she resembles a Butterball turkey wrapped in foil. Her three friends are also wearing various shades of tacky.

“What can I get for you to drink?” asks Mike.

“Well, we just got here, can you give us a few minutes??” bawks one of the women who happens to be wearing feathers on her collar. “Gawd!”

Mike retreats to the side stand to begin his sidework. The restaurant is now officially closed but he knows he is there for a good while to come. A clap of thunder echoes through the mostly empty restaurant, making the woman in feathers let out a squawk of surprise. Mike wonders if perhaps she just produced an egg. A few minutes later, he approaches the table once more to see if they are ready to order.

Silver Sequin lady orders a Long Island Iced Tea and Bird Lady asks for Moscato. The other two women, one with too much makeup and the other with too much cleavage, order a shot of Patron and a frozen daiquiri. “God, the bartender’s gonna hate me,” he thinks. He notices that the lady with too much cleavage is adjusting her bra by putting her hand down her shirt.

“I’ll get your drinks to you shortly, ladies. Would anyone like to order any food yet?”

“I’m not hungry,” says Makeup Lady as she reapplies her lipstick which is a color somewhere between Fire Engine Red and Cadaver Claret.

“Me either,” says Cleavage Lady who seems content with a chicken cutlet peeking out from underneath her bra.

When he returns with the cocktails, they are still not ready to order because, hey, why the fuck would they be, right? They ask him far too many questions, most of which they could answer themselves if they would just read the menu.

“What kind of soup do you have?”
“What do you got for appetizers?”
“What’s the burger come with?”
“Do these pants make my ass look big?”

“Clam chowder, all the appetizers are on the front page of the menu, french fries and yes, your ass looks huge but don’t blame the pants.”

They eventually decide on two orders of wings and one order of nachos which Mike puts a rush on. Not like he has to tell the kitchen to hurry up at this point in the night but he is ready to see these ladies leave. Their food comes up in record time and when he goes to the table, he sees that Bird Lady has fallen asleep. Her head is resting on the table right where he needs to place the wings. One of her friends pokes her and she awakes with a start. There is a sleep line across her forehead and feather stuck to her cheek.

“Gawd! I fell asleep, I can’t believe it. I don’t want these anymore,” she says pointing at the wings with her wings. “I’m too sleepy to eat, gawd!”

Mike removes the wings from the table and from their check. They assure him they don’t need anything else and he watches them peck at the nachos and remaining wings as Bird Lady struggles to stay awake, Makeup Lady smears her lipstick, Sequin Lady finishes her drink as well as the Moscato and Cleavage Lady finally gives up and puts her chicken cutlets in her purse. Mike checks on them three more times to make sure they don’t need anything and once they are finished, he gives them their check. It is now 50 minutes after closing time and their bill is $70.

Sequin Lady gives him a credit card, he runs it and returns with their voucher to sign. They wake up Bird Lady and the four of them stumble off into the lobby of the hotel.

As Mike approaches the table to pick up the receipt, another clap of thunder rattles the room. Written on the tip line is a zero. No tip. None at all. He crams the voucher into his apron and begins to buss the table. He bends down to pick up a napkin that is smeared with lip stick when he notices a drivers license sitting on the chair. It belongs to Sequin Lady. He drops it into his apron and finishes clearing the table and doing his sidework.

What happens next is a little fuzzy for Mike. He remembers making his drop with his manager and he remembers saying good night to the dishwasher, but what he doesn’t remember is how that drivers license somehow ended up in the paper shredder, gone forever.

By the time Mike leaves, the storm has subsided. He made good money this night with the four women being the only ones who disappointed him tip-wise. He doesn’t mind. He knows that Sequin Lady will be paying that tip in other ways, namely by a replacement fee, paper work and a long line at the DMV.

5 thoughts on “A Waiter’s Revenge”