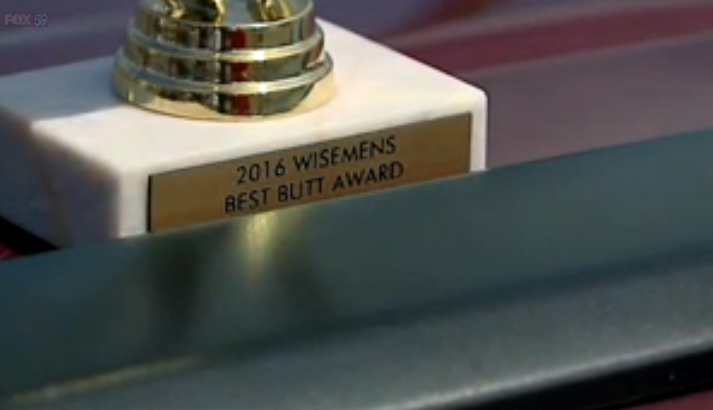 A waitress in Southport, Indiana is upset that she was given an award at her job at Scotty’s Brewhouse. While some people got “Best Bartender”or “Best Server,” the unidentified waitress got the award for “Best Butt.”

She was given the award at an event in front of co-workers and the woman is so offended that she is considering filing a complaint with the Equal Employment Opportunity Commission (EEOC). She is also waiting for an apology from her employers at Scotty’s Brewhouse or the corporate HR department. You know, if I was embarrassed about getting an award for my butt, the first thing I would NOT do is call the local news crew and have them do a story about it, but whatever.

Bless her heart. While I can understand how degraded she must have felt with all of her co-workers admiring her derrière as she accepted her award, I can’t help but (butt?) be jealous of her. As a 49-year old, I long for the days when anyone even realized I had an ass. If I was given an award for “Best Butt,” I would be calling the local news organizations too, but for a completely different reason:

Hello Fox 59? It’s me, Bitchy Waiter. Guess what! I just won an award because people like my ass! Can you believe it? I’m so excited. No one has complimented it since the mid 90‘s. So anyway, when do you want to come over and photograph it? I’m free right now and for the rest of my life until you agree to come over and do a news story about my fabulous ass. Yeah, I’m a good waiter too, but my ass can run circles around my waiting skills. I must admit that I am waiting for an apology from the HR department for not giving me this award sooner. I mean, wait until you see my ass. It’s amazing.

Full disclosure: In 2007, I did a photo shoot for a toilet campaign, They took a picture of my butt and it ended up on their website and even on a billboard in Times Square. A church in the neighborhood got offended and sued to have it taken down, but for a few short weeks, I mooned Times Square. My butt is the third and fifth one. Yes, this is true.