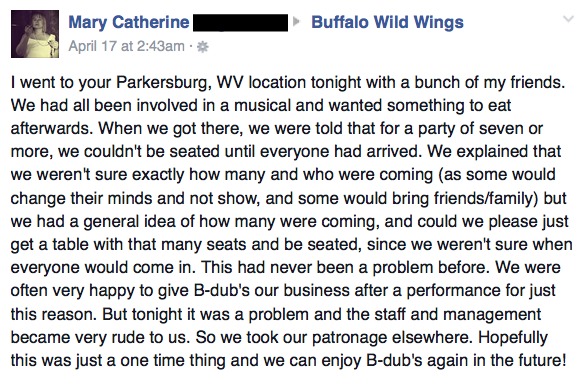 MC is all butt hurt because she showed up to a Buffalo Wild Wings with a “bunch of friends” and wanted a table even though she wasn’t “sure exactly how many and who were coming.” Of course the restaurant didn’t want to seat her at a table for 15 people when it might have just been 7 people who showed up and Mary Catherine and her friends didn’t even know when or if anyone else was coming. Oh, and they had just been involved in a musical. Upset, her and her friends did a “step, kick, kick, leap, kick, touch…again” and left Buffalo Wild Wings to give their patronage to someone else. The manager was probably all, “Don’t cry for me, Mary Catherine. The truth is I never liked you…”

First off, you cannot expect a restaurant to keep seats empty for you on the off chance that everyone who might show up actually shows up. What if your friends are too engrossed in the original Broadcast cast recording of Wicked and can’t pull themselves away to join you at the restaurant? If that happens, your waiter is going to be belting out a rendition of “Empty Chairs at Empty Tables” from Les Mis because that’s what his fucking section will look like. Hey, big spender, spend a little time waiting by the host stand for your friends to get there and then you can have a table.

Mary Catherine also claims that they have often given BWW’s their business after a performance which may be why the staff finally decided to tell her they were unable to seat the incomplete party. The odds are pretty good that Mary Catherine and her group of musical theater loving friends are as annoying as a high school production of Cats. I can say that, because I used to be Mary Catherine. When I was but a young musical theater queen doing shows, after many a performance the whole cast and I would head over to Bennigan’s and take up way too many tables and we’d all split a plate of nachos, some fried mozzarella and a bunch of waters. I am certain that Mary Catherine is that table. They all sit there and recite the lyrics to Legally Blond and Into the Woods and talk about how much fun it was doing Shrek the Musical even though Mary Catherine thought she should have been cast as Princess Fiona but instead was cast as the Sugar Plum Fairy and the third understudy for Ugly Duckling.

There is a reason for not seating incomplete parties. Those seats are real estate and leaving them empty is not gonna help anyone pay their rent and since this is real life and not the musical Rent, waiters actually do have to pay for things. And if you ask for a table that seats 15 people and only 7 of you show up, that waiter ain’t making any money. Besides, a 15-top of people who just did a show is basically a Little Shop of Horrors and no one wants to deal with it.

Hopefully, where ever Mary Catherine and her gaggle of friends ended up, they had a wonderful time. My guess is that they went to Applebee’s or Chili’s and annoyed everyone there with their incessant attempt to rap the lyrics from Hamilton.