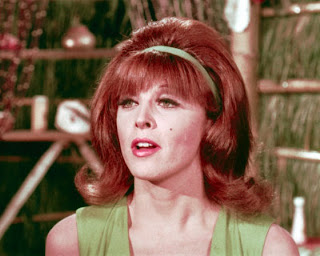 Today is Tina Louise’s birthday. I don’t know how it is possible, but she is 80 years old today. This is for her.

While recently dining out with friends, the topic of work came up and of course everyone started to tell horror stories about their jobs. Everyone who has a job has a horror story and if you work at Hooters, you might actually have a whore story as well. Someone asked me who was the most famous person I have ever served while waiting tables. After thinking about all my brushes with celebrity greatness, I decided my answer was Sally Field, leaving one Miss Katy Perry out in the cold. There were other servers in the mix and I thought that no one else could have possibly waited on someone more famous than Sally Field. But someone did.

“I once waited on Tina Louise,” said Joann.

My mind froze. As Joann told her story, I was unable to think of anything else except the deep valley of jealousy I had just fallen into. I saw Joann’s mouth moving but all I heard was the sound of my own tears falling onto the table. They were tears of anguish, frustration and envy. Why, God, why? Why can’t I have the good fortune to wait upon someone as wonderful as Tina Louise. All I get is lame ol’ two-time Academy Award winner Sally Field.

For those of you not in the know, Tina Louise is the brilliant actress who brought to life the role of Ginger Grant, the movie star, from television’s Gilligan’s Island. She is gorgeous, genius and ginger. As Joann told the story of her experience with the actress, I drifted off into my own world and imagined what it would be like to wait on her myself.

Tina Louise: Hello, dear waiter. I hate to bother you, but may I place my order?

Bitchy Waiter: Bother me? Are you kiddin’? You’re Tina Louise. I’m a huge fan. Whatever you want, I’ll get for you. Oh my god, you’re Tina Louise! Ginger Grant in the flesh!

TL: Yeah. Anyway, I am in a little bit of hurry because I am going to meet my friend Dawn in about an hour-

BW: What about the Skipper?

TL: Dead. Can I get the tuna nicoise salad but with no tuna and-

TL: Asshole. And dead. So anyway,  I don’t want tuna. Can I get chicken instead and instead of green beans I want extra tomatoes.

BW: Wait, what? The professor was an asshole? No way.

TL: Listen, I can see that you are enamored of me and why wouldn’t you be? I played Ginger Grant on one of the most amazing television shows of all time. I am gorgeous and sexy and I know that you want me very badly, but all I want is a tuna nicoise salad with no tuna.

BW: Yes, ma’am, of course. Where did Ginger Grant get all of her fabulous clothes? Why did she pack so much for a three-hour tour?

TL: Well, one of the dresses she made from the sail of the S.S. Minnow and the rest she had in her luggage. Now, may I get some water with lemon?

BW: Did you ever do it with the Professor?

TL: The professor was an asshole. He was a horrible horrible man and I’m happy I will never have to talk to him again for as long as I live. I’m done speaking about this now.

BW: Ooooh, I hit a nerve, didn’t I? Do tell. If you give me the dirt, I will comp you a slice pf coconut cream pie.

TL: Hmmm, I do love me some coconut cream pie. Okay listen, this cannot go any further than this room, okay?

BW: Of course! It’s not like I have a blog that I’m gonna run home to and then post this entire conversation or anything. Duh.

TL: Yes, I loved him. Ginger Grant loved the Professor just like I loved the man who played him, Russell Johnson.We had a hot and fiery love affair and they were writing it into the storyline when all of a sudden he dumped me without any explanation at all. After that, the writers had to develop a new storyline for our characters and that is why the show was eventually canceled.

BW: Really? That’s why it was cancelled? I thought it was canceled because it was so fucking stupid. I mean, don’t get me wrong, I loved it, but c’mon. It was dumb.

TL: We ran for three years and for the fourth season, there were big plans to shift the focus of the show from Gilligan to the relationship between Ginger and Professor. But all of that changed when Russell broke things off and had the writers scrap the idea for the season four. The next thing I knew, the show was canned. It was going to be my ticket to the Emmy award I always deserved and then the next step would have been movies where I could have gotten an Academy Award. Yes, I loved Russell and Ginger Grant loved the Professor. We made love on hammocks and we fed each other coconut cream pies while Natalie Schafer watched. Our love was hotter than the volcano they tried to throw Gilligan into in episode #98, “Gilligan the Goddess.” That was our last episode, by the way. And it’s Russell’s fault! RUSSELL’S FAULT!!!

TL: Call me Ginger Grant. Tell me I’m beautiful. I wanna be loved by you, by you and nobody else but you. Boop boop de boob, ooh!

BW: So. lemme go get that water with lemon-

TL: Don’t leave me. Why does everyone leave me? Am I that horrible? I’m Ginger Grant. A movie star!! A move star goddammit.

BW: Can someone please click that dreamy harp music? I need to get out of this.

So maybe it wasn’t so great to wait on Tina Louise… That bitch sounds crazy. But happy birthday, Tina Louise.

16 thoughts on “Waiting on Ginger Grant, the Movie Star”