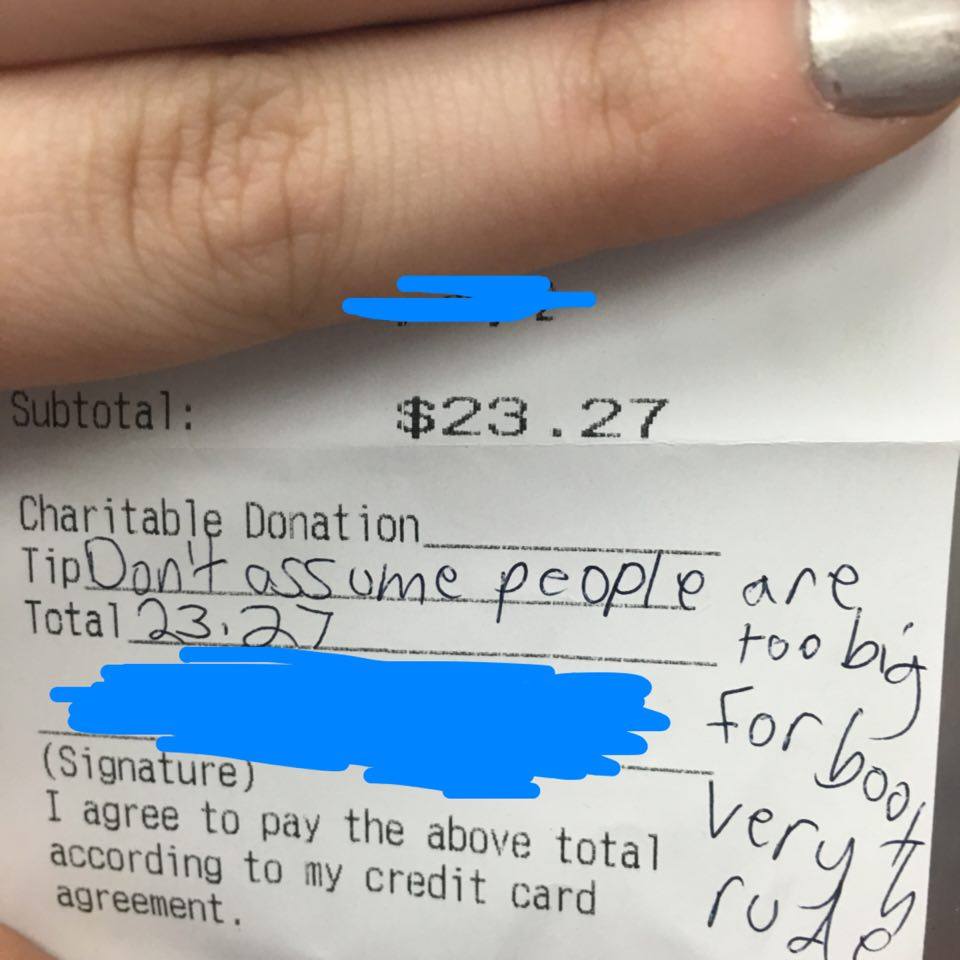 Sometimes our customers are offended by things that we would never expect them to take offense to. No server is going to intentionally say something that would upset a customer and therefore jeopardize the tip. However, there are some Sensitive Sally’s out there who have egos as precious as eggshells and they are constantly on the look out for words and actions they think are being directed at them.

A waitress sent me a photo of a credit card receipt with no tip and and the customer took the time to explain why she had chosen to be a cheap bitch.

Don’t assume people are too big for booth. Very rude.

The waitress tells me that all she did when the woman came into the restaurant was ask her the simple question, “Would you like a table or a booth?” It’s a very common question when one walks into a restaurant and not one to be take offense at. The woman, who apparently feels that people think she is too big for a booth even though servers don’t give a rat’s ass where she sits, was upset.

Attention all people, fat or otherwise: asking if you want a table or booth is your server being courteous, not insulting you. I know there are some people who are too big to sit comfortably in a booth and I am not going to ask them to sit there. On the other hand, if am seating a 350-pound person, maybe I will ask them what their preference is so they don’t assume I think they won’t fit. Even though I know they won’t. Or what if I take them directly to a table, bypassing booth after booth, is that person going to be upset that I didn’t give them the choice? Or worse, upset that I tried to seat them in the booth and then have them not fit? We can’t win sometimes.

I think this woman was overreacting about the question and that was no reason to stiff her server. It’s almost as if she was self-conscious about her size and assumed that everyone was thinking about her weight just like she was. That was not the case. It’s not like the server said any of these things:

Most of the time, servers are trying to do the right thing. We don’t want to upset you and if we do, I hope you will really think about it and decide whether it was intentional or not before you leave a big fat zero of a tip. (By the way, she ended up seating at a booth.)

And by the way, if you want to buy my book, I will love you for it. Click here. The book is an equal opportunity offender.