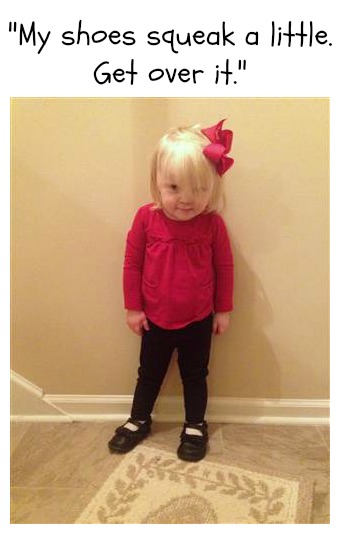 A story has popped up about a Panera Bread in Savannah, Georgia that asked a woman to please remove her daughter’s shoes because they were squeaking too loudly and another customer complained. It turns out that the little girl was wearing orthopedic shoes prescribed by her doctor to help with her disabilities and a spinal abnormality. As you can guess, that didn’t go over very well.

Catherine Duke took her two daughters, 3-year-old Ana and 2-year-old Emma into the restaurant to presumably have some yummy Kids Bistro French Onion Soup and some Mommy and Me time. As Emma walked around in her shoes, some asshole was disturbed by the squeaking and wasn’t able to fully concentrate on how perfectly toasted his Smokehouse Turkey® Panini was so he felt like he should complain about it. I mean, can you blame him? When you go out to a fine dining establishment like Panera Bread, you do expect optimum conditions for doing the New York Times crosswords puzzle. How dare this little girl walk! So he complained and then the employee went to the mom and basically suggested that it would be better if the 2-year-old just walked around barefoot in a public place, because we all know how well that employee mopped the floor that morning before they opened. Understandably, the mom was all, “Umm, I don’t think so” and she high-tailed it out of there after speaking with management. She also called her local news station to pour a little salt in the wound. Panera Bread is a franchise so when Papa Bear Panera heard about the brouhaha, they issued a formal apology for the misunderstanding and have even agreed to hold a fundraiser to help with Emma’s medical bills and raise awareness for children with disabilities. Catherine Duke is satisfied with the response but has yet to decide if she will ever set foot back in that Panera Bread no matter how hard she craves a Napa Almond Chicken Salad Sandwich.

Basically, an employee handled the situation wrong and Panera Bread has made good, but let’s talk about the person who complained about squeaky shoes in the first place. They’re shoes! Get over it. Whether they are orthopedic shoes or fucking clown shoes, a little squeaking isn’t going to hurt anybody. If you need absolute quiet when you eat, I would suggest you keep your ass at home. What, were you studying for the bar exam? Were you on a conference call? Were you trying to take a nap? What world do we live in where people feel the right to control their surroundings in a public place? This little girl wasn’t screaming or popping her gum for an hour. She was walking with her mom who wanted a refill of coffee. Why are people so entitled these days?

This reminds me of the time I was on the 7 train and this girl was talking way too loudly on her cell phone. It was annoying, but I didn’t want to risk getting sliced in the face by asking her to please shut the hell up. She looked mean. But one other passenger couldn’t take it anymore. After ten minutes of her jib-jabbing about her life, the man yelled across the car, “Excuse me, you’re not at home in your living room!” The girl gave him an epic eye roll and replied, “Neither are you.” She went back to her conversation telling the person on the other end of the line, “Just some asshole trying to tell me to be quiet.” She had a point. When we go out in public, we have to rely on other people to use their manners but we all know that isn’t going to happen so it is our responsibility to control how we react to such events.

Clearly, the person who complained about the squeakiness of a little girl’s shoes needs to lighten up a little bit. And maybe the employee should have just said something like, “I’m sure the little girl will be sitting down very shortly if you can just find some patience in your tiny little heart, asshole.” Either way, it’s just another example of a customer thinking that their needs are the only ones that matter.  That’s how a lot of customers are these days and his behavior is getting to be the new normal. He’ll also probably be in your section tonight.

UPDATE: According to a quick Google search, the shoes in the picture, which are the ones she wore to the restaurant, look remarkably similar to a shoe called the Wee Squeak Ruffle Maryjane which are not listed as orthopedic. If this is the case and the little girl was wearing shoes that squeak for the sole purpose of squeaking, then I am suddenly on board with the person who complained. That would annoy the fuck out of me. I see that the squeaky toy can be removed. Regardless, the employee should never have bothered the mother with such a minor complaint and if the asshole had an issue he should have taken up with the mother directly rather than have an employee do his dirty work. How will we ever know the truth??  -BW