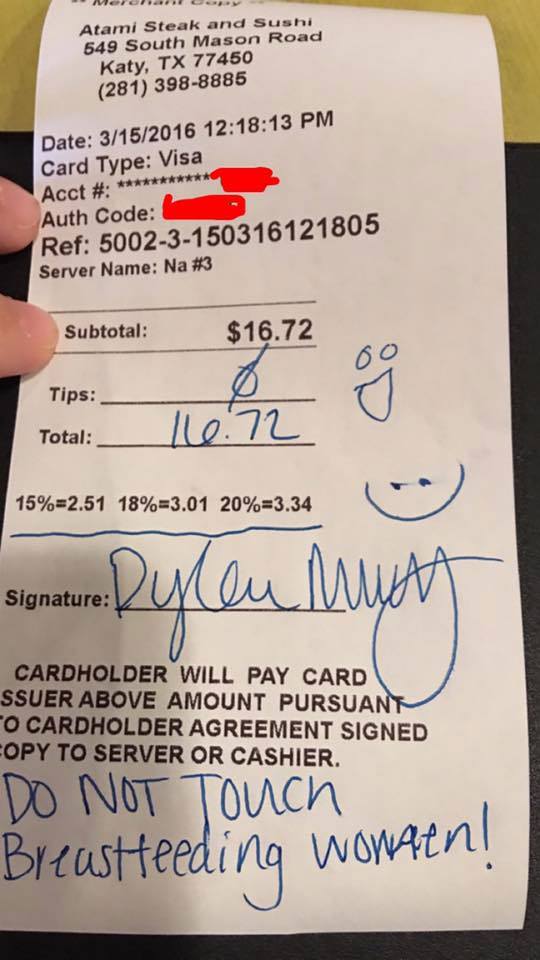 A waitress in Houston, Texas is in some hot water after she saw one of her customers breastfeeding at the table and decided it was inappropriate and basically thew a napkin over her the boob and the baby. Of course that did not go over so well with the mom who then stiffed the waitress, left a note on the credit card slip, took a picture of it, posted it to Facebook and then sat back and waited for it to go viral.

Dylan Downing and her two-month-old bundle of joy were out for some lunch at Atami Steak and Sushi Bar when the baby started to cry. Dylan quickly pulled out a milk bag to feed the infant and this is when the waitress, Rattana, got all up in her business. Rattana said that three men at a nearby table were complaining about the visible breast which is ironic because these same guys probably have an Internet history full of tits and ass. The waitress thought she was doing the right thing, but realized it was the opposite of that when the angry mother pulled the napkin off and asked her why she was touching her and covering her child. Rattana probably shuffled back over to the three men, handed them some extra soy sauce and then boot scoot boogied right outta that situation. Once the story made the news, the waitress apologized and explained she was only trying to help. The mom holds no hard feelings and says she will go back to the restaurant. No word on whether or not she will begin tipping again.

People, people, people, women have a legal right to feed their baby wherever they fucking want to feed it. If it’s in the middle of an Arby’s and she’s surrounded by horny teenage boys, she can still do it. If someone doesn’t feel comfortable seeing a tit, the best way to deal with it is to not look at the tit. It’s not that hard. Personally, I have been avoiding tits since the second semester of my sophomore year in college and no matter how averse I am to boobies, I’d rather be sitting amongst  a sea of them than hear a baby wailing because it’s hungry. If you are in a restaurant and see a woman breastfeeding her baby, let me just save you the trouble of telling her how it’s wrong:

Trust me. If a woman is breastfeeding at a restaurant and you are going to try to get involved in it somehow, it will not work out for you.