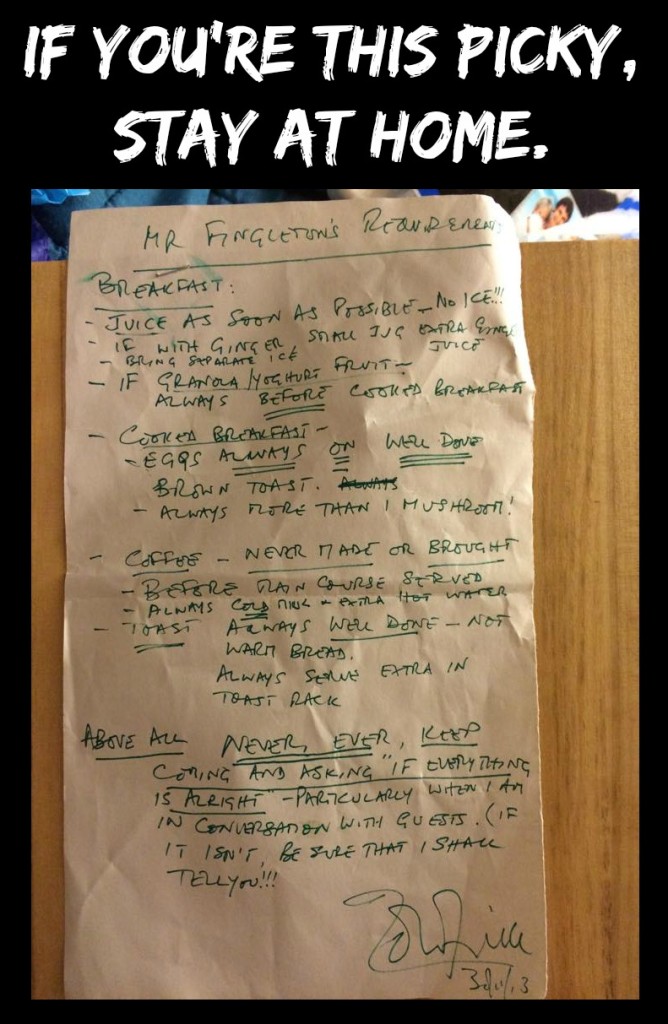 Might this be the world’s pickiest customer ever to go to a restaurant? This photo was sent to me by a server who probably no longer has the use of his hands since a man named Mr. Fingleton snapped them off once when the server got too close to the table.

Above all, never ever keep coming and asking “if everything is alright”-particularly when I am in conversation with guests. If it isn’t, be sure that I shall tell you!!!

Who the fuck is Mr. Fingleton and why doesn’t he just stay at home to eat if things need to be this specific? Seriously, he needs to go to Craigslist and hire a butler. This list of demands is unbelievable but the one thing on there that I find the most difficult to believe is that he would ever be dining with a guest.

A Poem for Mr. Fingleton

Poor Mr. Fingleton hasn’t any friends
No one in his life to help him with Depends.
Goes out to the diner where they know he is a whiner,
He gives his list, the waiter’s pissed and wishing he could slash his wrists.
The eggs well done, the juice, no ice.
Why is Mr Fingleton so not nice?
Fuck Mr. Fingleton, he’s too damn needy.
He’s cheap as hell, his diaper smells, he’s also fucking greedy.
He never tips, he steals the pens.
Poor Mr, Fingleton hasn’t any friends.