Home
/
Uncategorized
/
Another Server Fired Thanks to Social Media 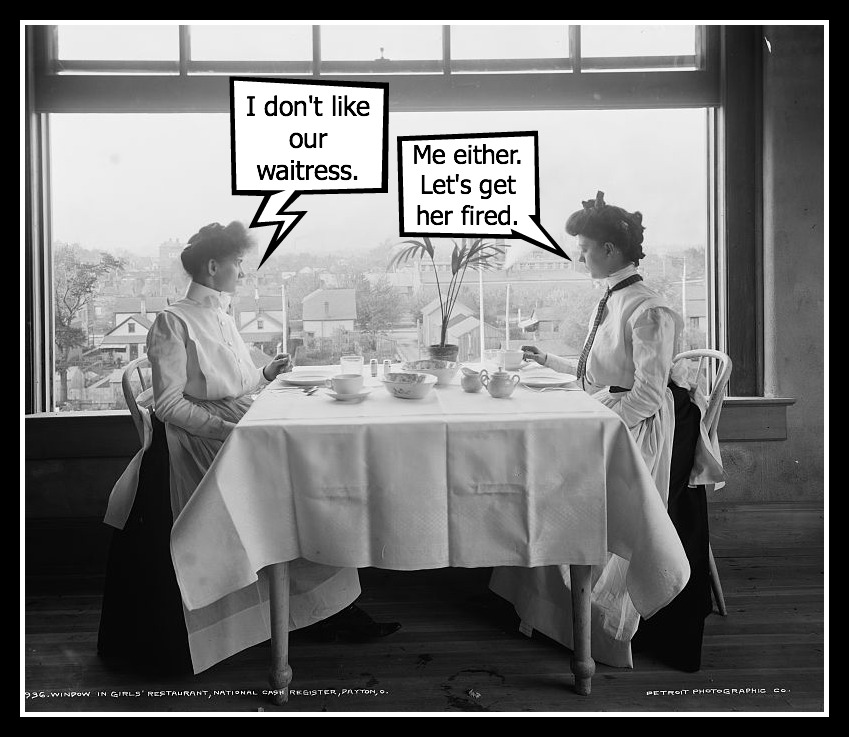 You know I loves me some social media. My world revolves around it. My sun is Facebook, my moon is Twitter, the stars are Instagram and Uranus is my ass. We live in this crazy digital world where we are all connected but only in a pseudo sense, because “liking” something on Facebook doesn’t really mean that we have meaningful relationship with the person who posted it. But how often do people forget that what we post online can have a direct consequence on someone else? Of course, I never forget because I have a sick fascination with putting things on the Internet to see what happens, but that’s just me.

Case in point, a woman named Tiffany Marie who was dissatisfied with her service at a restaurant called Hacienda Las Glorias. She was so upset about her experience that she went to the restaurant’s Facebook page and posted a negative review about the server Jessica and the day after that review went up, Jessica was fired. Coincidence? I think not. Here is what the review said, but it has since been deleted.

Worst most disrespectful service I’ve ever had a restaurant. I am so beyond pissed at the horrible service and attitude I got today. I was a very regular paying customer for months and after how disrespected I was today I will NEVER go back. I have never been treated so bad. I can’t even express how rude the waitress was. I’ve spent so much money there over the months but they lost very loyal customers today. Unfortunate that they treated us that way. There’s nothing I can’t stand more than rude disrespectful service!! 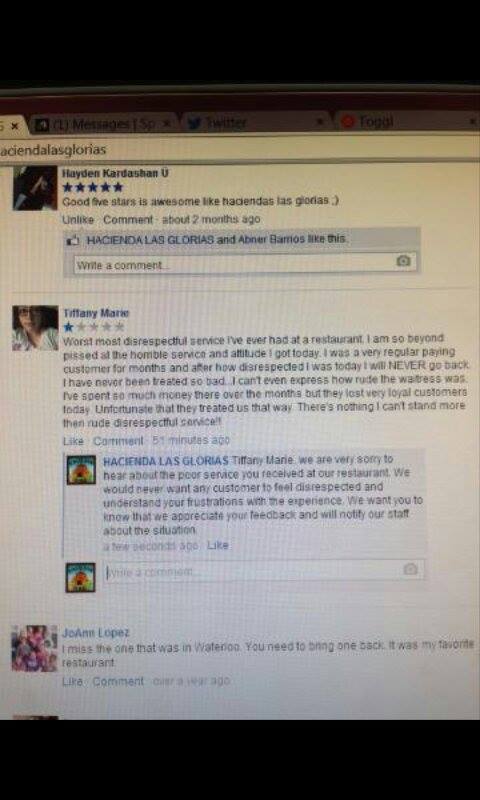 Boo on you, Tiffany Marie!

The server sent me an email explaining what had happened and hearing her side of the story is quite different. According to the server, Tiffany Marie was upset that she was charged extra for the cheese sauce on her enchiladas since it normally comes with enchilada sauce. They felt they should have been told in advance. Jessica apologized and told them that it was listed in the menu and someone at the table accused Jessica of being rude. First off, if they are such loyal fucking regular paying customers (as opposed to the customers who don’t have to pay, I suppose) wouldn’t she know that the cheese sauce is extra? Bitch, please. Cheese is never free. Some customers at a nearby table spoke up on Jessica’s behalf  claiming that she wasn’t being rude, she was just doing her job. This probably embarrassed Tiffany Marie and she promptly went home to fire out her negative thoughts to the Hacienda Las Glorias’ Facebook page. The next day, Jessica was unemployed after two years of service.

Now, we don’t know both sides of the story. For all we know, Jessica already had a history of customer complaints and this was the straw that broke the enchilada’s back. However, what we do know is that Tiffany Marie wanted to get a resonse and she succeeded at it. Jessica is now without a job because she didn’t let cheap ass Tiffany know that she was going to have to pay an extra fifty cents or whatever for some extra goddamn cheese sauce on her stupid ass enchiladas. Maybe Tiffany felt bad about the review and that’s why she took it down, but the harm has been done, Tiffany. And by the way, we all know that you knew the cheese sauce was going to be extra. We also all know that you will eventually show your ass back up at Hacienda Las Glorias because you are so damn loyal and you can’t resist some cheese sauce.
What we have here is someone lashing out on the Internet and not thinking about the repercussions of their actions. Before someone tells me that I am doing the same thing let me tell you something: I know that. I think about the reactions that my posts will get and I relish them. If people want to go to Hacienda Las Glorias Facebook page and tell them that you think Jessica should be given a second chance, you should do that. (Seriously, click here to do that.) I also know that Tiffany Marie may eventually see this post and have her feelings hurt, but I’m cool with that. She can soothe her hurt feelings with a box of Velveeta and some Tostitios for all I care. I am not posting Tiffany Marie’s Facebook page in this post, but if you do some digging, I bet you can find it. Some of y’all are bigger bitches than I am. 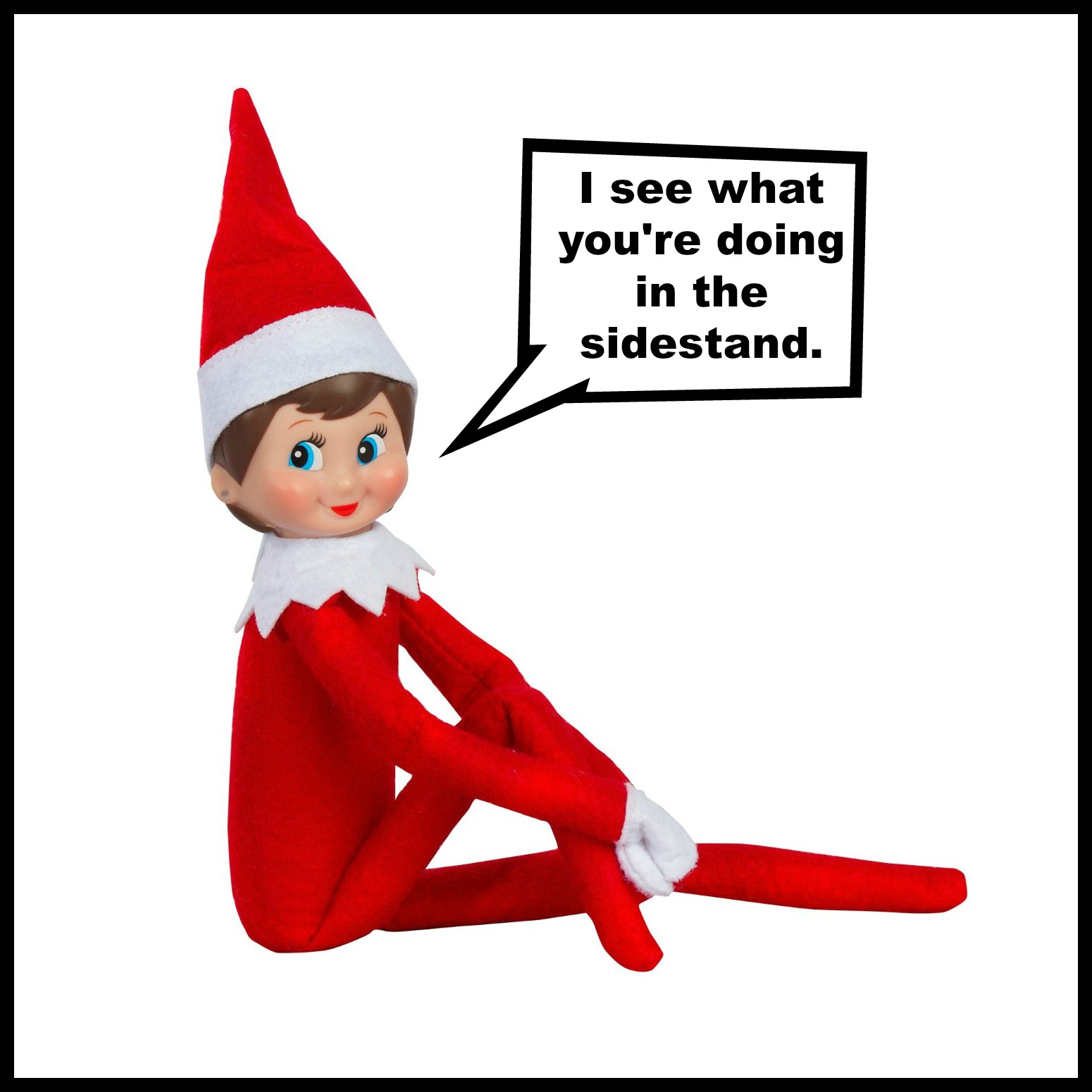