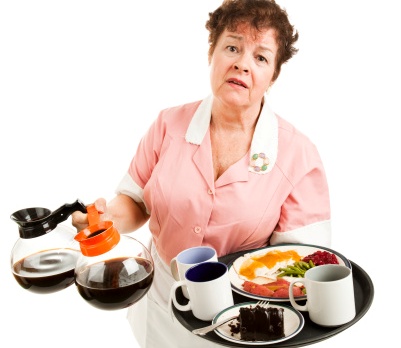 A special shout out to ABC News for writing an article called “10 Things Your Restaurant Won’t Tell You” which could also be called “Ten Things We Pulled Out of Our Asses Since We Don’t Work in Restaurants.” It’s the same old tired shit that people write about the service industry and I feel it’s my duty to respond. They broke the points down into three different categories and I would like to dissect each of them:

The second-cheapest bottle of wine is marked up the most: This may or may not be true since I have never had the opportunity to set the prices on the menu. If it is true, I have to say it’s pretty fucking genius because I know lots of people order the second least expensive bottle of wine so they don’t look like cheap ass. Good job, restaurants.

Wait times are made up: Of course we make it up because how else are we supposed to know what time that bitch at Table 9 is going to finally take the last bite of her salmon that she’s been making love to for the last forty-five minutes? We tell customers it will be “about 15-20 minutes” because we are making a guess based on previous experience. We aren’t psychic  and that Magic 8 Ball has a crappy track record. “Oh, Magic 8 Ball, is that lady at Table 9 ever going to be finished?” “Ask Again Later.”

Restaurants re-use your half-drank bottle of wine: In my 75 years of restaurant experience, I have never seen this happen. So they’re saying if a customer is going to leave a half bottle of wine that we will serve it by the glass the next day? No way. Maybe I’m wrong, but that just does not happen. Then again at the places I work, I don’t have enough room in my reach-in for a half-empty box of wine. At least in New York State, customers are allowed to carry it out with them if the bottle is corked and in a bag but I’d be really surprised if any restaurant owner took that bottle back to the bar and started to sell it again. If anything, the server will drink it, but even that is unlikely unless your name is Bus Tub Connie and you’re cool with eating and drinking the leftovers of customers.

Your server is probably lying to you: True. Depending on what we’re talking about, we might be. I worked once for a fancy as fuck celebrity chef-owned place that was peppered with famous people. One night we had a white truffle pizza as an appetizer that was $125. Every customer asked how it was and I told every single one it was the most delicious piece of pizza I have ever had the pleasure of putting in my mouth. Do you really think the kitchen made a few extra $125 pizzas for the staff to try? Of course they didn’t, so yeah, I lied. I also lie every time a customer asks me how I’m doing and I say “I’m good.” Other lies I have said at work: “My pleasure,” “I love working here,” and “The coffee is fresh.”

Homemade can be more like half-made: True. Anyone who eats at a chain restaurant and believes that Grandma’s Chicken Pot Pie was actually made by a grandma is an idiot. It came from Costco or Sysco and was thawed out by Miguel who then peeled it out of it’s aluminum tray and placed it lovingly on a plate that was garnished with a sprig of parsley to give it that “fresh from the garden” look. Fresh from the walk-in is more like it.

Your lemon water is kind of dirty: Duh.

Servers procrastinate, too: Basically, the article is saying that on slow nights we might not be as attentive to customers as the customers would like because we are doing other things like side work or eating dessert. I don’t know how that makes us procrastinators but I do know that plenty of us are putting off getting another job, going back to school or figuring out what we want to do with our lives. So, yeah, I guess maybe we are procrastinators.

That coffee you ordered for an energy boost post-dinner is probably decaf: It’s a fact of restaurant life that at the end of a shift you want to start getting ready to go home and dumping the regular coffee is right up there with blowing out the candles and hiding the silverware that you’re too lazy to roll. I would never give someone regular who wants decaf, but if it’s the other way around who the fuck cares? Decaf is magic. Like I was in college, it goes both ways.

The menu is designed to make you spend more: News flash here, but restaurants are in the business of making money. So just like marking up the second cheapest wine bottle, they are going to design that menu to make the most expensive things sound and look the best. I’m glad this is under the “obvious” category but they should have just made a fourth category called “No Shit, Sherlock.”

Thanks for the words of wisdom, ABC News. Your crackerjack staff has really upped the ante on this breaking news story. Your Edward R. Murrow award is in the mail and I have filed the paperwork for your Pulitzer. They should both be there shortly. In the meantime, please allow me to pour you some fresh coffee and I will go slice you a piece of Aunt Betty Sue’s famous chocolate cake. It’s homemade, you know!

13 thoughts on “10 Things Your Restaurant Won’t Tell You? Whatever.”