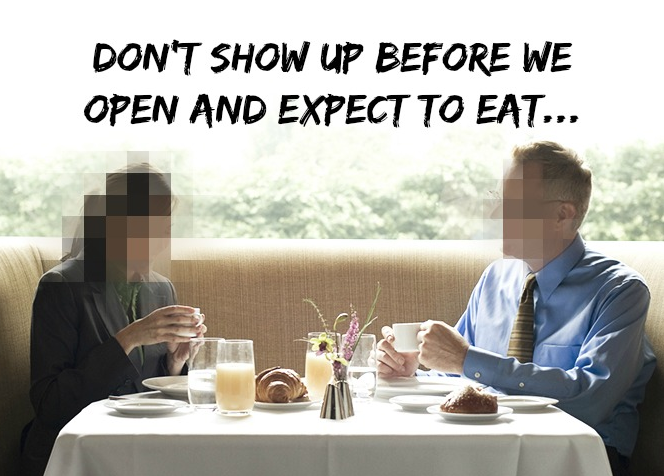 My restaurant opens at 5:00 for dinner. Being the opener, I arrive at 4:30 to restock, make the coffee, set the tables, polish the silverware, sweep the floor, and sit in the bathroom and cry. This day, I punch in at 4:31 and immediately pull the ketchups and butter from the reach-in. As I am filling the pitchers with water, two people waltz in as if they own the place.

“Hi, table for two and we need to use the restroom,” the man says.

I look at them and wish that either I had remembered to lock the door behind me or that the sign that says what time we open was about a million times bigger than it is. “Oh, we don’t open until 5:00, but you can use the restroom if you want,” I tell him.

“Can we have a drink while we wait?” he asks me.

“No, I literally just got here two minutes ago. We’re not open. But you can use the restroom.”

They both head to the back of the restaurant and each go into a restroom as I set up the bread station and restock the napkins. The guy finishes first and seats himself at table 15 to wait until the woman is finished. Or so I think. When the woman comes out of the restroom, she joins him at Table 16 and they start chatting like they are on a fucking park bench or on their couch at home and not sitting exactly where I always sit to eat my shift meal. (When I say “eat,” I mean “take a picture of it for my Instagram account before I throw most of it away.) This is when the bartender arrives.

“Sorry, I’m late,” she says. “Finding free parking is a bitch in this neighborhood. What the fuck?” she says when she spots the King and Queen of Assholeland.

“I know, I just fucking told them we’re not open, but I guess they’re gonna sit there until we are.”

This is when I look at the owner/chef of the restaurant and wish that, for just once, he wouldn’t avoid uncomfortable situations and go tell them to get the fuck out of here. But he doesn’t.

“Whatever…fuck it. I’m ignoring them until 5:00,” and I proceed to do my sidework making sure to be extra loud every chance I get. At 4:55, I see my two regulars Ann and Jerry park in front of the restaurant. They come in every Thursday at 5:00 and always sit at Table 16. I am not going to ask Ann and Jerry to sit somewhere else, so I go to talk to my unwelcome visitors.

“Guys, we’re just about ready to serve you now, but I have some regulars who sit here every Thursday at 5:00, so I’m gonna ask you to pick any other table in the restaurant.”

I look at the patio door which is sealed with tape to keep the winter winds from howling through the restaurant and also has a huge fern sitting directly in front of it.

They then move to Table 15 which is about 12 inches away from Table 16. Yes, I just told them that someone else is going to be sitting here and they don’t think it’s annoying to decide to sit directly next to them, despite the entire fucking restaurant being empty. I hate these people a lot. I intercept Ann and Jerry to explain why there is someone already here and why they are sitting next to them, but they are fine with it as long as I bring their Chardonnay and Malbec right away.

Mr. and Mrs. Asshole order their food and I try to be as nice as possible despite my severe dislike of them. All is well and good until I place his hamburger and fries in front of him.

“Oh, I didn’t want fries, I wanted vegetables,” he tells me.

“Well, you didn’t tell me that and the burger comes with fries.”

“We don’t even have kale, so… spinach maybe?”

He agrees to the spinach, so I take his plate to the cook who gives me some serious side-eye when I tell him the fries aren’t wanted. I return the burger and tell him this Popeye Wannabe Asshole that his spinach will be out in a couple of minutes. Once I serve the spinach, they are officially dead to me. I go to the sidestand to eat the fries that now belong to me and patiently wait for them to eat and get out. My smile is the fakest it has been in a very long time when I present them with the check. I thank them for coming in and make a joke about not being open at 5:00 that isn’t really a joke.

They left me a 20% tip and I got to eat their french fries, so overall, I’m glad that the two fucking assholes showed up at 4:30. 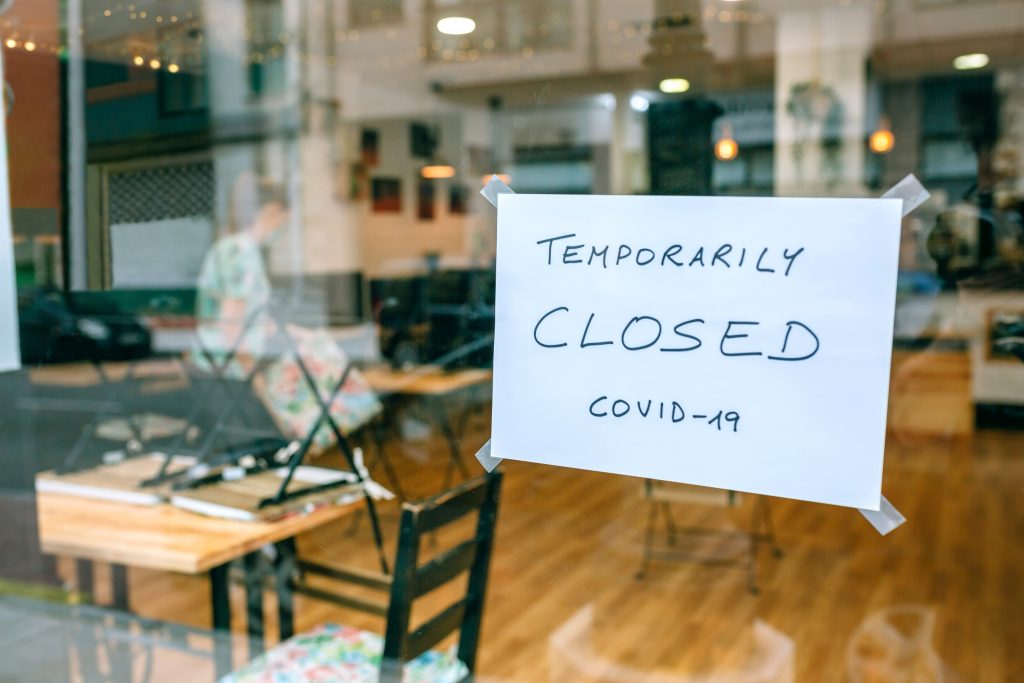