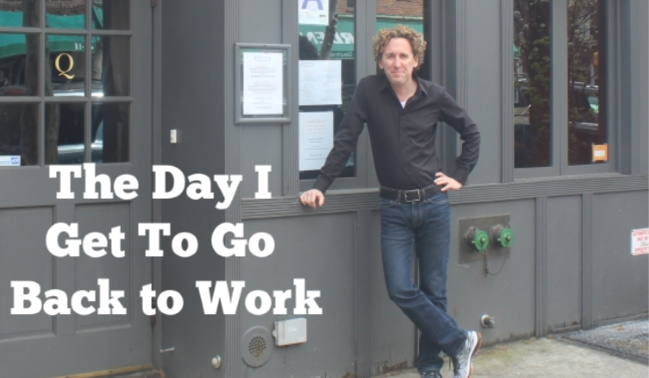 Today was the day I had been looking forward to for so very long: I went back to work at the restaurant! It never occurred to me that I would miss my apron as much as I did, but these have been trying times that have changed my perspective on a lot of things. Walking the three blocks from my apartment to the restaurant didn’t feel like it used to. There was no dread or hesitancy, just joy in knowing I would see all my regulars again like Ann and Jerry and Mildred and John. The bartender and I actually hugged when we saw each other and we breezed thought the opening sidework like it was nothing. I wiped down the tables and made sure they were all perfectly aligned with each other so when customers came in, everything looked neat and orderly. The candles at the center of each table even seemed to shine brighter than I remembered. The silverware and glasses, polished. The menus, wiped down. The sugar caddies, full.

My boss let me create a playlist for opening and at 5:00 I turned it on. The first song was that Hawaiian/ukulele version of “Somewhere Over the Rainbow” followed by “Another Day of Sun” from the movie Lala Land and after that was “Happy” by Pharrell and then “Here Comes the Sun” by the Beatles. I don’t even like the Beatles, but that song seemed too appropriate. Every single song for the next five hours was positive and jubilant and it made me remember how powerful music can be.

All of our regulars came out tonight. It had been weeks since I had seen or heard from Kevin and there was much relief when he showed up and took his regular seat at the end of the bar. Kevin is an older man who has health issues, so he had been in my thoughts a lot lately whenever the news would tally up the latest number of people lost to the virus. None of us had Kevin’s cell phone to check in on him and it was easy to think the worst, but there he was drinking his chardonnay and ordering salmon with an arugula salad as if nothing had ever changed. It was the busiest Thursday night our restaurant has seen since Valentine’s day fell on a Thursday a couple of years ago. Every single customer was happy and grateful and every tip that was handed to me came with a warm smile and gratitude; they were so happy to go out to a restaurant again and be social, surrounded with people. What I don’t think they understood is that I felt the exact same way.

I timed the playlist out perfectly and at 10:00 closing time, k.d. lang’s version of “Hallelujah” began to play. I took a moment to survey the restaurant and appreciate my job. I’m not ashamed to admit that my eyes welled up just a teensy bit. By now, there were only two tables left and I don’t think either one of them noticed that the next song was “So Long, Farewell” from The Sound of Music followed by “Leaving on a Jet Plane” which was then followed by NSYNC belting out “Bye, Bye,Bye.” Yes, it was time for them to go, but I didn’t even care that they were still sitting there talking and laughing. They had both paid their checks, so I did my sidework and let them be, filling up their waters as needed. By 10:25, all of my customers were making their way out of the restaurant. I cleared the tables, full of bliss and satisfaction. “Don’t You Forget About Me” began to play over the speakers and I knew I never wanted to forget this night when the world finally seemed normal again.