‘Tis the season for miracles. In this day and age, it may be hard to believe in them, but we have to open our hearts in order to see the true beauty of the season and be willing to accept the miracles that happen before us each and every day.

It is Thursday night at the restaurant and a very slow one at that. In between the occasional customer, I long for something that will help the time pass more quickly. As if to make it move even slower, fate sends in two of the oldest people I have ever seen. Their wrinkles have wrinkles and they are basically two big age spots asking for a table. The woman looks to have been born sometime during the John Adams administration (the first president Adams and not the second president Adams) and moves slowly with the help of a cane. I have seen glaciers move faster than this woman and her cane looks as if it has become part of her, solidly attached to her right hand. Her husband looks even older and is pretty much a walking fossil from the pleistocene era. Had I not known better, I would assume he was on leave from the Museum of Natural History. Amazingly, he has no cane, but he is leaning on his wife, both of them depending on the strength of that cane to support them. After they sit down and produce some reading glasses with lenses that are as thick as her ankles, they eventually decide upon their meals, minus every bit of seasoning and spice.

As they are eating their dinner, I wonder what it must be like to be that old. I look at her cane leaning on the next table and it seems to be grateful for the opportunity to relax. I think to myself that if I am ever that old, I hope that when I go to a restaurant there isn’t some bitchy ass waiter taking notes about me so he can write a blog post about my life. I also hope I never need a cane. The couple is very sweet and I find myself hoping only good things for them. I make a mental note that that the next time I find a penny on the sidewalk that I want to wish for them to be healthy and happy. What kind of holiday season will they have? After 200 years of marriage, do they still buy presents for each other? How do they shop? If they can barely make it to Table 11, I cannot fathom that they go to Target on Black Friday. Perhaps they do all of their shopping online, but that too seems unlikely since they are probably still trying to understand the newest invention in their home, the radio.

“Dadgummit, I can’t find Amos and Andy anywhere on this thing!”

“Well, dear, that’s because that isn’t the radio. That’s the other new invention we bought. It’s called a toaster.”

I wonder how long the woman has been using a cane and then I wonder how long the man has been using his wife as a cane. After they have enjoyed their decaf coffees that they insisted be incredibly hot but then complained that they were too hot, I give them the check. Surprisingly, they pay with a credit card and not Buffalo nickels, confederate money or wampum. They slowly walk toward the exit, taking such a long time that by the time they are gone I feel in need of a shave. When I go to clear the table, I am astonished.

There, leaning on the next table, is the cane. It is exactly where she left it. I pick it up and head to the door to catch them on the street expecting them to be about six to eight inches away from the exit, but remarkably, they are already out of sight. Not only did she no longer need the cane, her feet had become swift enough for them to vanish out of my sight in a matter of seconds. Unless they both were taken into the loving arms of Jesus right outside the restaurant, they are already home, sans cane. It’s a true Christmas miracle. I am standing with the cane questioning it’s very existence and shaking with joy that I have experienced a miracle. I have my photo taken with the cane for surely, it will soon find a home in a church or some other place where holy miracle relics that were bought at CVS reside. I have witnessed a miracle and I feel grateful. I show the cane to my manager who tells me to stick it behind the door to the basement so that when she comes back for it, he’ll know where it is.

“She won’t need it again,” I cry. “She’s been healed! It’s a Christmas miracle!”

“Yeah, maybe,” he tells me. “Or she might break her hip tonight and she’ll need it tomorrow. Put it next to the broom.”

I take the calamari to Table 9, but my heart is as a warm as the marinara sauce, for I know: miracles can happen! 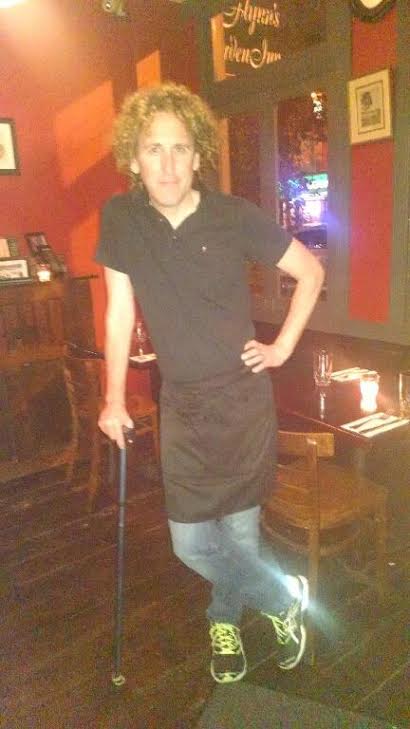 2 thoughts on “Miracles Happen and One Happened in my Restaurant”