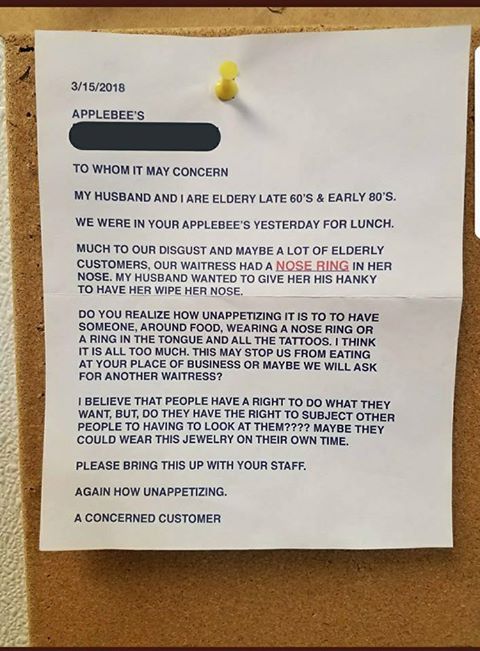 Very often, Applebee’s is my target of ire and today, although the subject is again Applebee’s, the target is a customer and not the restaurant itself. Last week, an elderly couple went to Applebee’s for lunch but their appetites dropped lower than a 68-year-old breast when they saw their waitress was wearing a nose ring. Of course the wife had to write a letter to management about this disgusting scene.

She describes themselves as elderly in their “late 60’s” and “early 80’s,” which means that one of them is a cradle robber. I’m guessing it’s the husband who is 80-something since the complaint was typed on a computer and used two different colors for the font; clearly the work of a spring chicken in their sixties. The senior citizens almost went into cardiac arrest when they saw the nose ring, but also wanted it known that they are equally disturbed by tongue rings and tattoos. So disturbed in fact, that they may consider eating at a different restaurant or even asking for a different waitress next time.

“Excuse me, manager? I’m 83 years old. Can I have a waitress who is as pure as the driven snow? I would also prefer she only wears clip-on earrings and that she has never colored her hair. In fact, I want a waitress who has never even cut her hair. And she must be a virgin. Actually, can I just have an Amish waitress? Oh, a Nashville Chicken Sandwich, thanks.”

While the senior citizen does admit that people should have the right to do what they want to do, she also feels that things like nose rings should only be worn on a person’s own time so as not to subject others to having to look at them. Listen, Myrtle Mae, if you and your Sugar Daddy of a husband are going to start requesting to only have to look at things that please you, then maybe I have a few requests for you. I don’t find it that appetizing when I have to look at an 83 year old man trying to choke down a Chicken Fajita Rollup as his denture cream repeatedly fails, so I request that you eat at home. I also don’t find it appetizing to see an older woman wearing so much makeup that her foundation is stuck in the deep folds of her jowls and her eyeliner looks like it was drawn on by a chimpanzee with the alcohol shakes, so I again request that you stay at home. Don’t get me wrong, it’s fine if your husband wants to gum a Fajita Chicken Rollup and it’s fine if you choose to look like the last clown climbing out of the trunk of a clown car, but I just don’t wanna see it.

Now, how did that feel to hear that something you like is unappetizing to someone else? Did it hurt your feelings? Did it seem unfair? Exactly. This waitress can wear a nose ring. She can wear a nipple ring, clit ring, nipple clamp, clit clamp or anything else she wants to wear as long as her employer approves and it doesn’t affect how she does her job. You and your husband need to wake up and smell the 21st century. There are bigger Hand Battered Fish & Chips to fry than complaining about the nose ring on an Applebee’s waitress. Chill the fuck out and live your life. Let your husband pop another Cialis and try to stick his Brew Pub Pretzel into your Fire Roasted Chicken Salad Wrap until he releases a load of Beer Cheese Dip into your BBQ Brisket Taco. In other words: get laid and get over it. 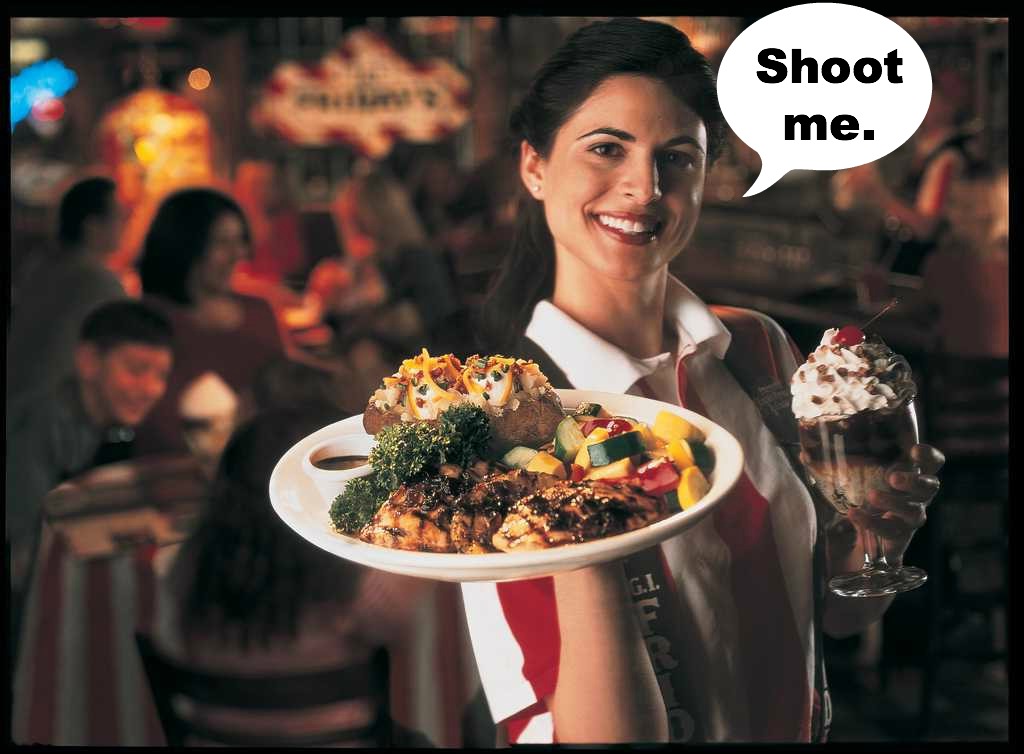