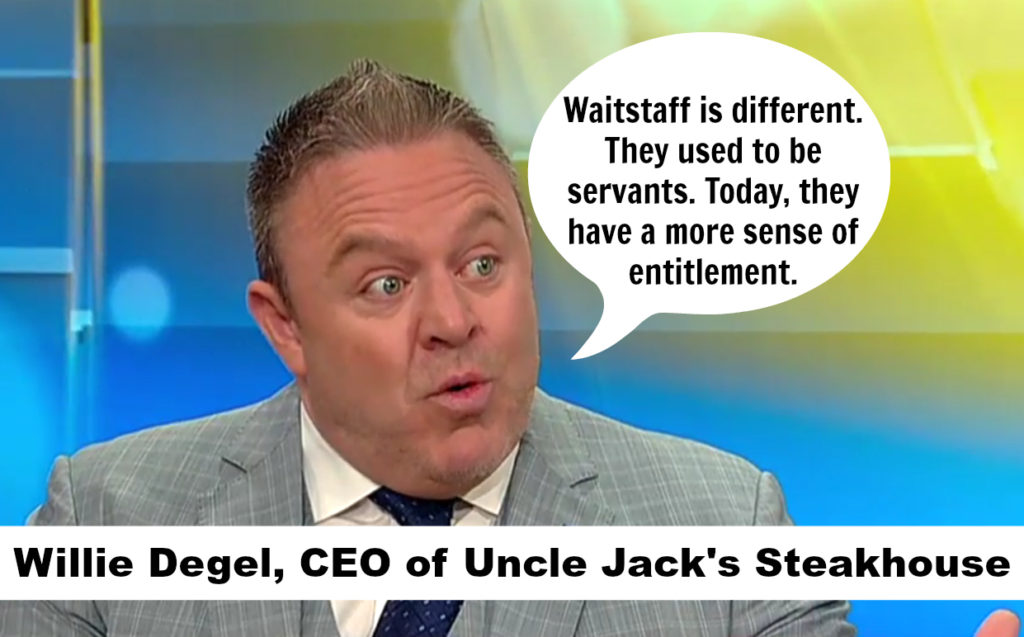 This morning on “Fox & Friends,” they had the CEO of Uncle Jack’s Steakhouse, Willie Degel, on the show to discuss the minimum wage increases for servers. I only know Willie Degel from the Food Network show “Restaurant Stakeout.” You remember that one? It’s the one where they place hidden cameras all over the restaurant in an attempt to bust employees for doing things that might be making the restaurant lose money. I always felt like that show was fake, staged and total bullshit because out of all the years I have worked in restaurants I never saw things happen that seemed to happen all the time on “Restaurant Stakeout.” Others tend to agree that reality may have been skewed on that show. Anyway, this asshole went onto “Fox & Friends” today and sharted out a lot of disrespectful things about servers and customers.

When talking about increasing the server minimum wage to $15 an hour and how the government expects that restaurants will pass that cost onto customers, he said that customers will just stop coming when they see a price increase because, “They’re not educated, they don’t understand what’s happening.” Yeah, he just assumed that customers are too stupid to comprehend basic rules of commerce. Okay, fine. I too think there are plenty of dumb customers. The difference is that I wouldn’t say that on national TV, especially if I owned a chain of steakhouses.

Then he moves on to the topic of servers and says some things that made my jaw drop. “The way of waitstaff is different. They used to be servants when I first opened years ago. People took great pride in being a servant. Today they have a sense of entitlement.”

Okay, did he really say that? He talks as if he had a steakhouse at Downton fucking Abbey and his staff is bowing down to Maggie Smith and shit. Bitch, please. There are plenty of servers today who take great pride in their work. Don’t let the name of this blog fool you, but I too take pride in what I do for my guests. Yes, some servers may have a sense of entitlement, but you can’t lump everyone who wears an apron for a living into the same category. We don’t all have a sense of entitlement. And by the way, random-blond-Fox News-Lady, I heard your little “uh huh” after he made that comment, so fuck you too. I bet you’re a real; joy to wait on, but you know what? Even if you were the biggest pain in the ass, you would never know that I was thinking it, because I am a professional who does my job and treats customers with respect. I save all my judging and bitching for this very blog.

Wille Degel-berry goes on to say that, over the last four to five years minimum wage increases have taken $2 million out of his pocket. Honestly, I’m sure it has, but maybe it was time for servers to make more than a few dollars an hour. Besides, without that two million dollars in his pocket, he will now have more room to store his daily allowance of beef jerky, corn nuts and salami.

Look, Willie, I have never worked for you or met you, but on this interview you came across as a pompous asshole. Maybe you didn’t mean to suggest that customers are stupid and maybe it wasn’t your intention to harken back to the good ol’ days when servers were servants, but that’s what you did, Willie. And just like it’s your job to make as much money as possible off the sweat and tears of restaurant workers, it’s my job as Bitchy Waiter to call your ass out. And I am doing that. So pull a Slim Jim out of your pocket, cram it down your throat and maybe think a little bit more next time before you talk on national TV.