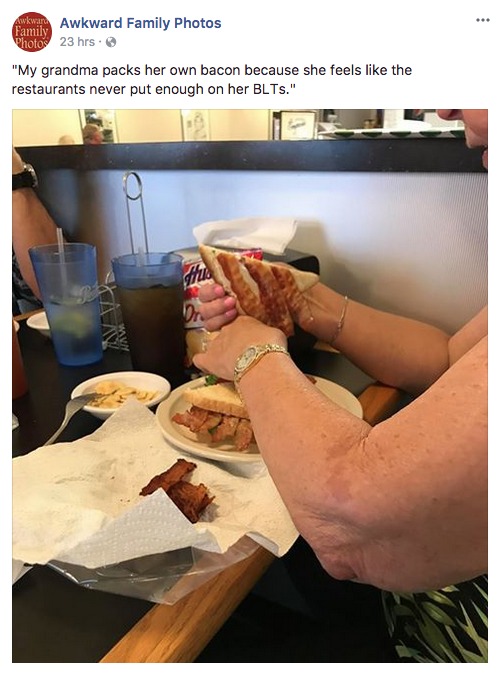 Hot off of yesterday’s shit show blog post about veganism, today I’m going to write about the wonderment of bacon. I have known several vegetarians over the years who have fallen off the vegetable wagon because of the sweet temptation of meat’s candy and who can blame them? It’s sad that a pig has to sacrifice its life for carnivores like me, but their sacrifice does not go unnoticed. I once had a t-shirt proclaiming my love for bacon and I wore it until it was shreds. If anyone wants to hit me up with a new one, please do.

A photo showed up on Ye Olde Facebook of Awkward Family Photos this week of a woman who brings her own bacon to restaurants because she doesn’t think the BLT’s she orders has enough of it. God bless her because nothing ever has enough bacon on it. Not Cobb salads, omelets, pasta carbonara, or donuts. Bring on the bacon.

What I also love about this woman is she knows that if she asks for extra bacon, we are going to charge her for it and she don’t play that. She’s all, “Nope, I got some bacon in my purse, I’m good.” She is prepared. Look at that photo! That bacon is wrapped up in a paper towel and inside a Ziplock baggie and ready to be added to whatever dish she orders. She is a true inspiration to us all.

Of course there is always the issue of people bringing in their own food and how that’s against health code regulations and all that, but it’s bacon! I give this woman an eternal Get Out of Jail Free card for her foresight, planning and ingenuity.

The only real question I have about this situation is this: isn’t bacon a pain in the ass to cook? It splatters all over the place and it’s not a quick and easy cleanup. If you can spend all the effort to make bacon at home, why not just make a BLT too? Isn’t the best part of going to a restaurant not having to cook and clean up after yourself? Nevermind, I know the answer: they don’t give you enough bacon in the restaurant so it’s all worth it. Besides, this woman probably has makin’ bacon down to a science and can do it in her sleep. When she wakes up each morning, she looks inside her purse to find a new stash of it ready to be used in whatever restaurant she chooses. She’s like her own bacon fairy.

10 thoughts on “Woman Brings in Her Own Bacon to Restaurant; Becomes My Hero”