Home
/
Uncategorized
/
This Woman is a Restaurant Superhero 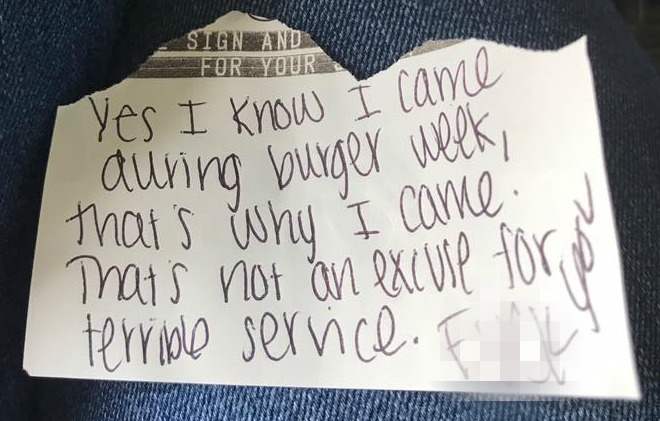 Not all heroes wear capes and in case you need proof, here it is.

Last week in Kentucky, an angel here on earth named Barbara Roney Eggenschwiler went to eat at a restaurant wanting to take part in their Burger Week promotion. She noticed at a nearby table some college girls who were complaining and mistreating their server who was obviously overworked, swamped and in the weeds. Barbara watched the girls get upset about the restaurant being out of what they wanted and she watched them call the waitress over to complain about how long it took for their food and loaded tater tots to arrive. Then she watched the girls write a note at the bottom of their check before leaving. Barbara, being an all-knowing saint, could tell that the note wasn’t praising the service of the waitress, so she waited until the girls left and she went over to see what the note said:

Yes I know I came during burger week, that’s why I came. That’s not an excuse for terrible service. Fuck you. 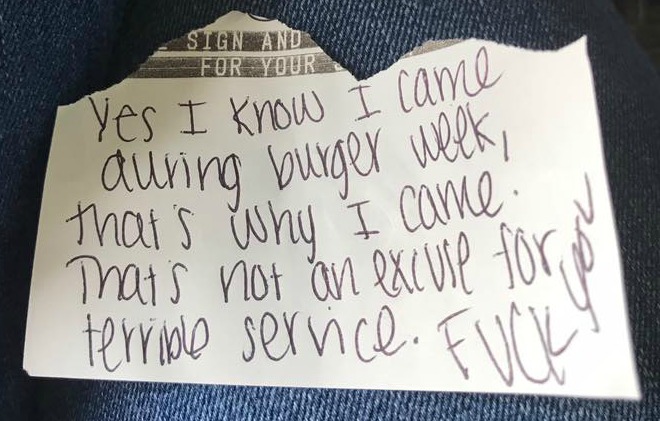 This is when Barbara took off her glasses, took the bobby pin out of her hair and started spinning so she could turn into Wonder Woman.

She ripped the note off the bottom of the check so the waitress wouldn’t see it and then she took it one step further and left the waitress a generous tip. Whoever was with Wonder Barbara shared the story on Facebook stating, “I hope this somehow gets back to the girl who wrote this so she can see how ridiculous you are and immature. You are nothing more than a spoiled brat and believe it or not, the world does not revolve around you. Grow the F*** up.”

Can we all just give it up for Barbara?

She single-handedly kept a server from becoming the victim of a bunch of spoiled girls who wanted to intentionally ruin someone else’s night. Because of Barbara, that waitress left her job thinking that not all horrible customers are horrible tippers. That waitress may have a few more weeks of hope left in her before the awful truth crashes down upon her. As for the girl who wrote it, I do hope this gets shared enough so it gets back to her. She needs to know that it didn’t matter how hard she tried to be a raging bitch to her undeserving waitress, because a superhero named Barbara swooped in and saved the day.

Not all heroes wear capes, but some of them go to Burger Night in Lexington, Kentucky and take the the wind out of the sails of bitchy college girls.