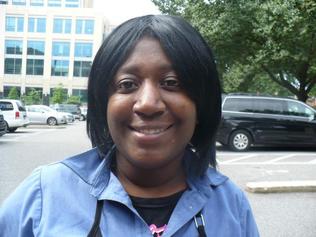 In today’s “Lets Screw With A Waitress” news, we have Shaina Brown who works at a Waffle House in North Carolina who was left a $1000 tip by a good samaritan but then Waffle House made her give it back thanks to a policy that was created by someone who doesn’t depend on tips for a living. According to the Charlotte Observer, Shaina works the late night shift and a customer left $1500 on a credit card voucher; $1000 for her and the other $500 for a woman who was eating in the restaurant who looked like she needed it. (Cue me to go sit in a Waffle House in drag and express neediness as I get free refills and play Candy Crush.) Head Waffle House Honcho spokesperson, Kelly Thrasher, explains that Waffle House has some policy that doesn’t let people give good tips unless it’s cash or check because we all know that we carry our checkbooks around with us and our wallets are full of thousand dollar bills. Bitch, please. If someone wants to tip $1000, they can. She says that Waffle House does this in case a customer wants to dispute the tip or ask for a refund. First off, if someone writes in a tip and then signs the voucher, sorry, but it’s mine now, end of story. I don’t care how drunk your ass was when you were feeling all generous and signed it, too bad so sad. I would suspect that Waffle House just didn’t want to pay a processing fee on the charge amount and that’s why they denied Shaina her tip. When the Big Tipper heard about the story, he promptly wrote out a check for Shaina because he knows that Waffle House needs to change their name to What the Fuck House.

Shaina has her tip, the do-gooder has his happy warm feeling and Waffle House now has thousands of people thinking they screwed over a hard-working single mom with two jobs. I guess I can understand their policy of not letting people charge huge tips on a credit card. Maybe they are protecting their customers. I suppose it wouldn’t be out of the question for some less than honest server to add a $1000 tip on a credit card and then quit after getting the money but before the customer realized what had happened. Or what if a thief was in cahoots with a server and the thief used a stolen credit card to leave a big tip for the waiter and then they split at after the server got his money from the? I suppose those things could happen. It’s too bad that Shaina was just being rewarded for doing her so job so wonderfully and it had to be tainted by corporate policy.

I wonder what would happened if Kelly Thrasher was going to get her big Christmas bonus of a $1000, a honey-baked ham and a week supply of waffles but her boss was like, “Oh, wait a minute, hold up, sweetie. We have changed our policy now so if you want that bonus, we are going to need to verify that the company really meant to give it to you. I need you to download some forms and then fill them all out stating what exactly you are expecting for your bonus. Once they are complete, I need you to send that to me in an email, in PDF format, and then I will forward that on to our Christmas bonus department. Once they have confirmed that it was in fact heir intention to give you this money, ham and waffles, I will ask that you file a claim for it. That claim form can be downloaded and sent to me in PDF format. If everything goes as planned you should have your Christmas bonus in June. Thanks, Kelly.” Pretty sure if that’s what happened for Kelly to get her bonus, she’d change that system right quick.

Congratulations to Shaina and thank you to the anonymous philanthropist who was just doing something nice. You know who really gets the shaft in this story? The needy looking lady who was sitting in the restaurant that the man wanted to give $500 to. Nobody knows her name, so nobody wrote her a check for $500. She probably doesn’t even know that she was almost $500 richer. She was just minding her own business eating waffles and lookin’ all needy and shit and she will never get her money. I’m sure some lady in North Carolina is going to come out any minute and say, “Hey I was at that Waffle House recently and I’m pretty sure I was the desperate looking lady that was supposed to get $500. Where’s my money.” If you see this woman, look closely at her. If she has curly Brillo pad hair with highlights, bloodshot eyes and is drinking a margarita, it might be me.

15 thoughts on “Waffle House Waitress Gets $1000 Tip. Still Has to Work at Waffle House.”