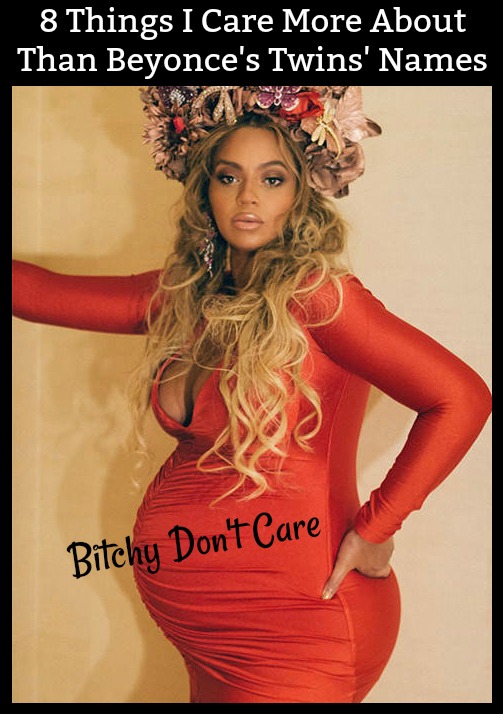 Unless you have been hiding in the walk-in for the last six months, you probably heard by now that Beyoncé popped out a couple of babies and everyone is dying to know what their names are. For those of you who don’t know who Beyoncé is, what in fresh hell is wrong with you? She is the most important person on this earth right ahead of Jose Cuervo and Barefoot Contessa. It seems that when she had her twins, the whole Twitterverse pretty much exploded and the Internet almost needed to take a sick day. Now everyone is freaking the fuck out about what she’s going to name them. Well, I am here to announce that unless she plans on bringing those twins into my section at work and I will have to tip the busser an extra five bucks to clean up after them I don’t care. At all. In fact, here are eight things I care about more than the names of Beyonce’s twins.

We get it, Beyoncé. You had some babies. It’s not like God reached down and touched you and then you gave birth in a manger or anything. Congratulations…you caught a hot load from Jay Z. There are plenty of us who don’t care what you name those loads. (By the way, Mrs. Carter. You can click here to buy my book.)