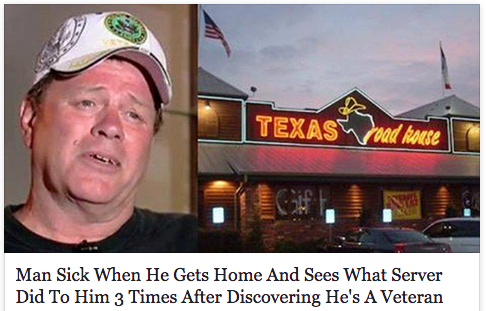 You know I am always here to stand up for the rights of a server. I am also the first person to take a server down who does something wrong or immoral, like stealing tips or committing credit card fraud to get more money. An article caught my attention because of the headline, “Waitress Commits Tip Fraud, Steals From Veteran.” At first glance, it is very clear that the server is in the wrong. The story is about a veteran named Doug Woodward from Colorado Springs who claimed his server changed the credit card tip on the three separate occasions when he went to Texas Roadhouse.

“Bad waitress,” I thought. “Why would you make us all look so bad?”

The man tells his story to a TV station (KXRM), Texas Roadhouse apologizes to him and gives him a full refund on the meals and the server is fired.

It isn’t until word number 417 out of a 466 word article that we realize the truth:

KXRM ultimately reported that Woodward was found to have scammed the restaurant by altering the bill himself.“Sadly, we have discovered this was a scam. We have rehired the server, banned this gentleman for life from any Texas Roadhouse and are considering legal action,” the restaurant said in a statement.

Wait, what? This asshole Dog Woodward scammed the restaurant by changing his own tip receipts to a lesser amount and made it look like the waitress charged him more than he wanted to tip. Okay, so he’s an asshole, we get it. But you know who the bigger asshole is? The author of this article, Sean Kelly, for creating a headline that makes it look the server was wrong when it was actually the fucking customer. What the fucking hell?

And then the article gets shared on a Facebook page called Proud to be an American that has almost five million followers on it. Of course they also spin it to make it seem as if the server was wrong and not the asshole veteran. (Sorry, but just because you served our country doesn’t exempt you from being an asshole.) “Man Sick When He Gets Home And Sees What Server Did To Him 3 Times After Discovering He’s A Veteran.” Umm, the waitress didn’t do anything to this dick and it especially had nothing to do with him being a veteran. This is total bullshit and I, as a server, do not appreciate it.

Here’s what I want you guys to do. Go to the Facebook post and leave a comment about how misleading the headline is. Then go to the article and tell them the same thing. They knowingly threw this server under the bus and are trying to make it look as if this veteran was taken advantage of when the truth is the exact opposite. You can certainly be proud to be an American, but there is no need to lie about a server just to uphold the dignity of a veteran who is a lying sack of Texas Roadhouse garbage.