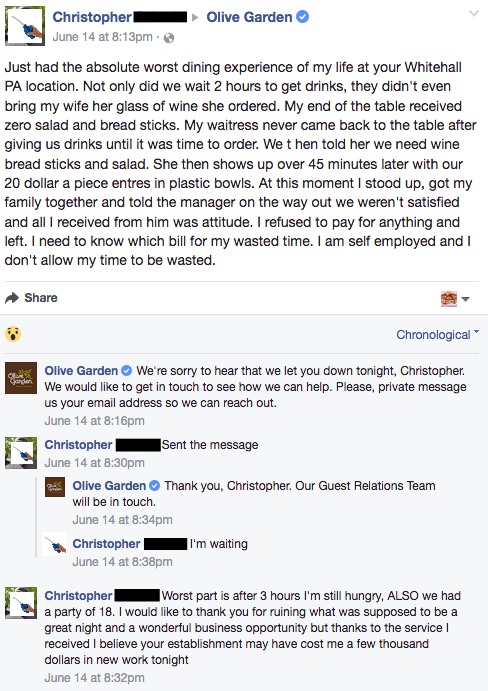 We all know how much customers love to exaggerate in order to prove their point. How many times have we heard someone ask for bread right away because they are “starving?” Or what about that customer who told you the food tasted “disgusting” even though they ate two-thirds of it? Our newest exaggerator is Christopher who went to Olive Garden and had “the absolute worst dining experience” of his life. Of your life, Christopher? Let’s assume you are 35 years old. That would mean you have been complaining on this earth for 12,775 days and have had about 38,325 meals. But this one meal at Olive Garden was worse than the other 38,324. Uh huh. Sure. Right. Lets’ break this down:

Just had the absolute worst dining experience of my life at your Whitehall PA location. Not only did we wait 2 hours to get drinks, they didn’t even bring my wife her glass of wine she ordered. Really? So you sat there for two hours, enough time to watch “You Don’t Mess With the Zohan” (112 minutes) and no one ever brought you your drink? Lies, lies!

My end of the table received zero salad and bread sticks. Did you ever consider asking for more breadsticks and salad? There are other magic words you could have used on the people at your table. You might want to write this down, because it could be very helpful in the future. “Hey, (insert name of friend here), can you please pass me the (insert name of item you would like here)? Thank you.”

My waitress never came back to the table after giving us drinks until it was time to order. Well, there really isn’t much of a need for her to be there after she delivers your drinks and before you order. What’s she supposed to do, stand there and watch you sound out the words on the menu?

We then told her we need wine bread sticks and salad. Good for you! You asked for something you needed rather than assumed she could read your mind. (It would be a short read…)

She then shows up over 45 minutes later with our 20 dollar a piece entres in plastic bowls. 45 minutes?? That is ridiculous! Unheard of! Oh, wait, is this another one of those exaggerations you’re so good at, Christopher? And why would she put your food in plastic bowls? I call bullshit on this one.

At this moment I stood up, got my family together and told the manager on the way out we weren’t satisfied and all I received from him was attitude.

I refused to pay for anything and left.

I need to know which bill for my wasted time. I am self employed and I don’t allow my time to be wasted. You think you can bill someone for your time because you are self-employed? You’re not an attorney on retainer, Christopher. Get over yourself.

At 8:16pm, the good folks at the Olive Garden Facebook page asked him to reach out to them so they could blow some smoke up his ass/give him a gift card. This, just three minutes after he aired his grievance. Christopher replied at 8:30pm telling them he had sent them the private message they had requested. They thanked him at 8:34pm and told him they will be in touch. Four minutes later, Christopher replied again: “I’m waiting.” Don’t you get the idea that Christopher is that guy who stares at the phone waiting for it to ring or watches a pot waiting for it to boil? It’s been four fucking minutes, Christopher.

At 8:32pm, while he not-so-patiently waited for an email from Olive Garden, he wrote more:

Worst part is after 3 hours I’m still hungry, ALSO we had a party of 18. Of course you’re still hungry. You walked out when they supposedly brought your food in plastic bowls. You can’t blame Olive Garden for your hunger anymore than you can blame Applebee’s for that rash between your legs.

I would like to thank you for ruining what was supposed to be a great night and a wonderful business opportunity but thanks to the service I received I believe your establishment may have cost me a few thousand dollars in new work tonight. So now it’s a business dinner? You already said you were there with your family. More lies, Christopher?

By now, I am sure he has received the gift card he wanted so badly and he can go back soon to stuff his gut with pasta and cheese. I just hope he remembers the next time to pay special attention to the details. That way, when he writes his next bad review he can do a better job than he did on this piece of shit. 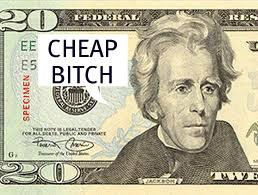