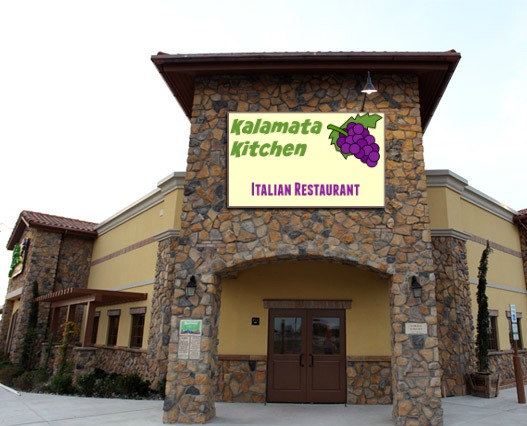 Alberta has been working at the Kalamata Kitchen for twelve years. She doesn’t work at the fancy one out by the new mall, but at the old one on the other side of Highway 59. It’s not as busy because as the other Kalamata Kitchen, but it’s a three minute drive from her house and it’s worth it to be so close to home. Most of Alberta’s coworkers don’t like her very much because she tells things like it is. Some people make their feelings known with subtle body language or muttered comments. Not Alberta. She once told a new hire that she couldn’t be in a section next to him because he smelled like a a rotting bag of meat and every time she inhaled next to him it made her want to throw up in her mouth. Granted it was true, but most people wouldn’t have the courage to be so blunt. Alberta has that courage, not to mention, fallen arches, blisters on her feet, varicose veins and a very short fuse.

She’s working Wednesday lunch after working doubles on Monday and Tuesday. Needless to say, she is ready for this shift to end so she can get the hell out of there and wash off the smell of breadsticks and Italian dressing. When her last table of the afternoon decides to sit for forty-five minutes after scarfing down two pieces of tiramisu, Alberta decides it’s time for him to go.

“So, I put your check down almost an hour ago, are you alright?” she asks.

“Oh, yes,” replies the old man. “It’s just so comfortable here and the atmosphere is so vert nice that I thought I would stay for a while and read the paper. You see, I’m a widower and sometimes it makes me sad to be at home all alone-”

“Well, look,” she interrupts.” “Sorry about your dead wife and all that, but my feet hurt because I have worked 30 hours in the last three days. So if you could just pay your check, that’d be great. I’ll be back in two minutes to pick it up.”

And with that, Alberta spun around on her heels and went to the ladies room.

“Somebody watch my station and make sure that old man doesn’t walk out or die.”

Scotty, who is in the middle of his first training shift at Kalamata Kitchen is shocked at the way Alberta just spoke to a guest. “I thought that when the customers were here they were kinfolk” he says to his trainer referring to the famous slogan for Kalamata Kitchen.

“Not with Alberta,” says the trainer. “For some reason, she gets away with anything here. She’s worked here for ever and nobody knows why management doesn’t fire her. She’s pretty awful.”

At this point, Alberta reappears from the restroom. “False alarm, everybody. I thought I needed to drop a load, but turns out it was just gas.” She goes directly to the old man who is fiddling with his wallet. “What’s the matter, your arthritis acting up? Lemme help you.” She reaches into his wallet and pulls out credit card. “A Discover card? Who the hell still uses Discover?” Laughing, she drops the card into her apron and says she’ll be right back.

Scotty goes up to the man to see if he can smooth out the situation. “Hello sir. Is there anything else I can do for you while Alberta runs your check?”

The old man looks up at Scotty to reveal tears in his eyes. “I don’t need anything else, thank you. I guess I’ll just go back home and watch the news or something.”

Scotty feels awful that this woman has completely ruined this man’s day. How can she do that? And why doesn’t anyone say something to her? She’s clearly an awful person.

“I’m back with your Discover card,” she says as she thunders back to to the table. ‘I went ahead and added a 20% tip for your convenience and alls you gotta do is sign right here.’ she forces the pen in his hand and he scribbles out a signature that could have just as well have been an SOS note asking to be saved from this wretched person. ‘Okay, buh bye.” She helps the man get up and puts his coat over his head as he shuffles toward the exit. “Jesus, finally! Alright, I’m punching out, everyone. Tootles.”

She tosses her paperwork and drop onto the bar and is in her car before the old man is.

The trainer shrugs his shoulders. “Yeah, well, what are you gonna do, you know? She has some kind of power over the managers so it is what it is.”

“What kind of power? Is she blackmailing them or something?”

“Nobody knows. Best to ignore her. The last person who reported her ended up getting fired himself and then he moved away. Well, that’s what Alberta told us anyway. Rumor has it that he just disappeared. I’m friends with him on Facebook, but he hasn’t updated his status since the day he was fired. Anyway, just stay out of her way and you’ll be fine.”

Scotty knows it is not in his nature to stay out of anyone’s way, especially when that someone treats others with such disrespect. He needs to know why Alberta is allowed to get away with her behavior. He can already sense that there will be a level of danger associated with this plan, but Scotty lives on danger. Well, danger and unlimited bread braids which is why he agreed to work at Kalamata Kitchen in the first place. He walks into the kitchen to get his fifth piece of bread for the day and vows to himself to get Alberta fired no matter at what cost.

5 thoughts on “Adventures at the Kalamata Kitchen”