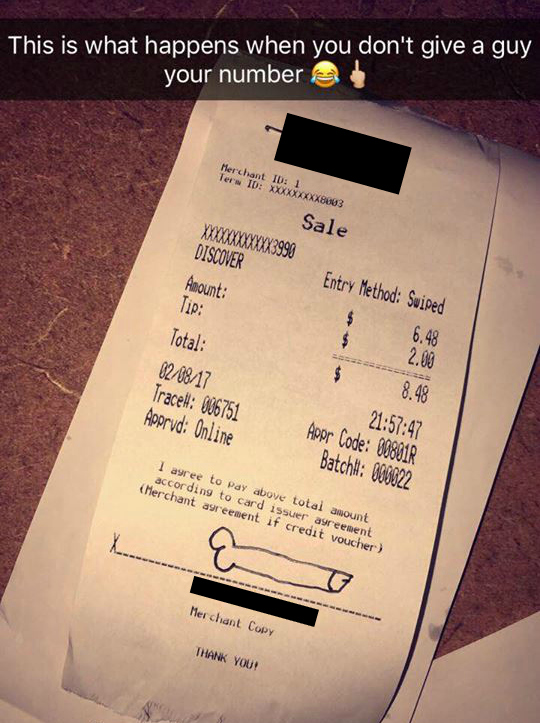 Your waitress is not required to give you her phone number just because you ask for it. Maybe you think she is so totally into you because when you asked for extra Ranch dressing she brought you two ramekins instead of one. She did not bring you that extra dressing because she wants to take a ride on your fried cheese stick. She brought you that extra dressing because she judged your gloober globber ass and could tell that one extra ramekin of Ranch wasn’t going to be enough for you and she was saving herself a second trip. Servers, by definition, are there to be nice to you. We try to smile as often as we can because it will give the impression that we are happy to serve you and that we are enjoying what we are doing. Don’t get me wrong, we aren’t always miserable at work, but even when we are, we tend to put a smile on our face. If we don’t, someone will inevitably say that we should smile more so we can make better tips. (Nine times out of ten, that someone will be a man telling that to a female server and then as soon as the woman does crack a smile, either the man is going to think she’s into him, or his girlfriend or wife is going to think that her man is being hit on right in front of her.)

But back to the phone number. If you feel like you and your waitress are hitting it off, it’s fine to ask for her number. Go ahead. After all, maybe the two of you are soulmates and you both felt that spark of attraction when your hands touched each other as she handed you a bread basket. You’ll never know if you don’t ask. However, if you ask for her number and she respectfully declines, it’s up to you be a gentleman about it and accept the truth: she doesn’t want you to call her. Maybe she has a boyfriend or a girlfriend, or maybe she doesn’t mix business with pleasure or maybe the way you sucked all the meat off that chicken wing told her everything she needs to know about what it would be like to make out with you. Deal with it. For whatever reason, she does not want to give you her number.

Your correct response is this: “Okay, cool, can’t blame me for trying, right? Have a good night.”

The incorrect response is any of these:

Look guys, your waitress is not obligated to give you her phone number. If you ask for it and she says no, be a real man, grow the fuck up and deal with it.

p.s. At least the guy in the photo still left a tip. That means he’s not a total dick. He just likes to draw them. 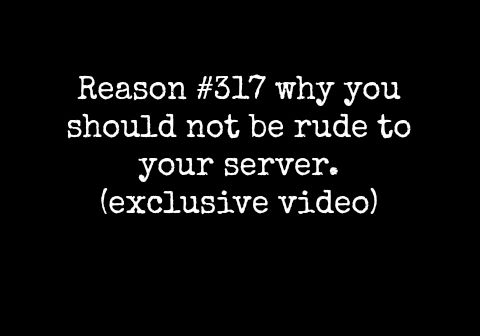