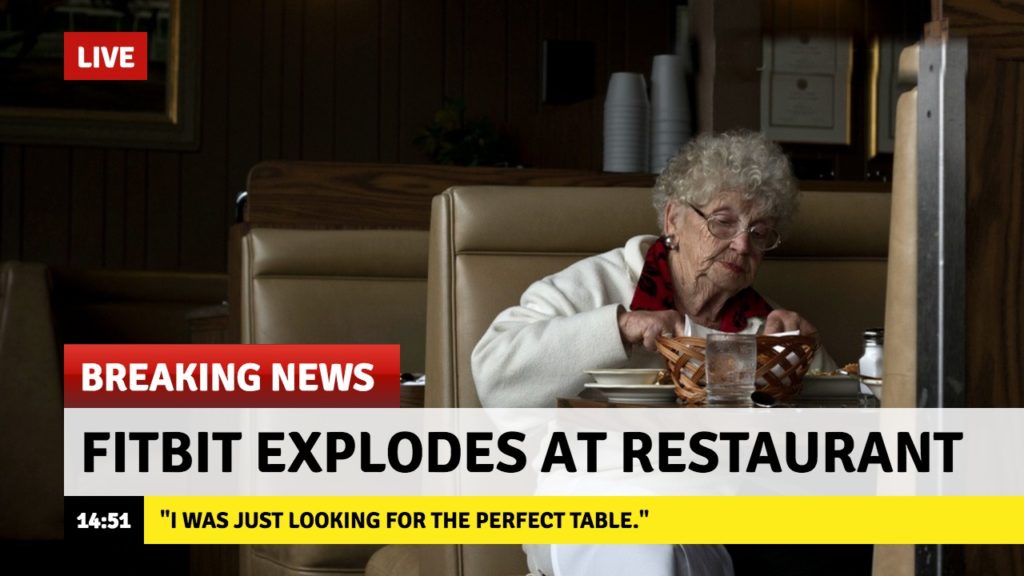 A 89-year-old woman was taken to the hospital for injuries sustained when her Fitbit exploded on her wrist in a restaurant in Willard, Ohio. Betty Walker went to have lunch at Bab’s Burger Barn this week, as she had every day for the last thirteen years, but things did not go as planned. She was wearing her Fitbit, a gift given to her by her oldest grandson. Although she does not know how it works or what it does, she wore it because it matched her track suit. Betty got to the restaurant at approximately 1:15 and was seated immediately at Table 9. However, the table was not to her liking, so she began wandering around the restaurant trying to find a better place.

“I don’t know why they put me at that table,” she says. “It was way too close to the toilets and the sun was shining in my eyes. So I got up to find another table.”

At 3:30, she was still walking around trying to find the perfect place to eat her half sandwich and cup of soup along with a cup of hot water she had ordered because she brought her own tea bag. Waitress Kendall Adear, 24, was very frustrated with the senior citizen.

“She wouldn’t sit the fuck down. Every time she’d find a place to sit, she’d unwrap the silverware and touch everything on the freaking table and then thirty seconds later, she was up looking for another place to sit. I mean, doesn’t she know the food tastes the
same no matter where she sits? I can’t stand that woman.”

After over two hours of constantly walking, the Fitbit on her right wrist began to smoke. Betty, thinking it was just some toast burning in the kitchen, ignored the acrid smell and because of her severe cataracts, she did not notice the smoke billowing from her own arm. It appears that the Fitbit was not used to having more than 30-50 steps per day and this day, as she went from table to table to table, she reached over 100,000 steps. The Fitbit simply could not take the strain and eploded.

Says Adear, “She was like a mad woman, walking all over the damn place. And when that Fitbit started smoking, the first thing I did was dump a pitcher of water on her. I made it look like I was trying to help her, but really I just wanted to pour water on her. It felt great for me.”

After the Fitbit exploded, Betty fell to the ground, coincidentally right next to Table 9 where she had begun her 100,000 step journey. A busboy doused her with a fire extinguisher. Adear also took the fire extinguisher and accidentally dropped it on the woman’s head. “I swear to god it was an accident,” claims the waitress.

Paramedics were called and she was taken to Mercy Hospital where she was treated and released. As she was being placed on the gurney, she screamed at her waitress to wrap up her soup and sandwich and asked for extra bread. She also requested that her hot tea be placed in a to-go cup.

The next day, Betty showed up again for her lunch. This time she was seated at Table 24 and it seemed adequate enough. She stayed there throughout the course of her entire lunch.

“I’ll never wear that Fitbit again, “says Betty. “I’ll tell you that much. It ruined my favorite tracksuit.” 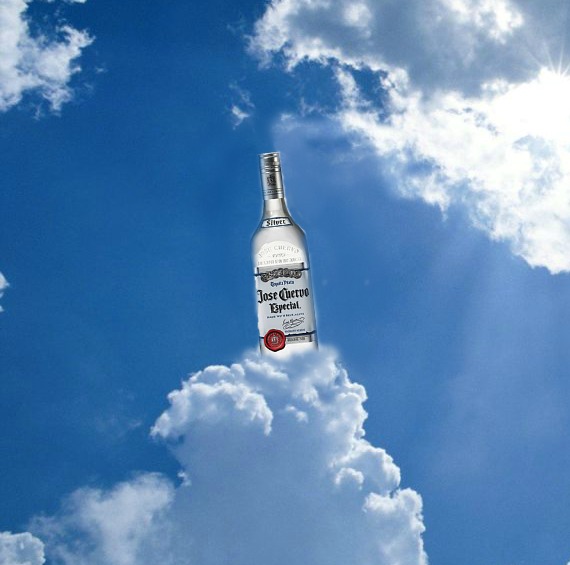