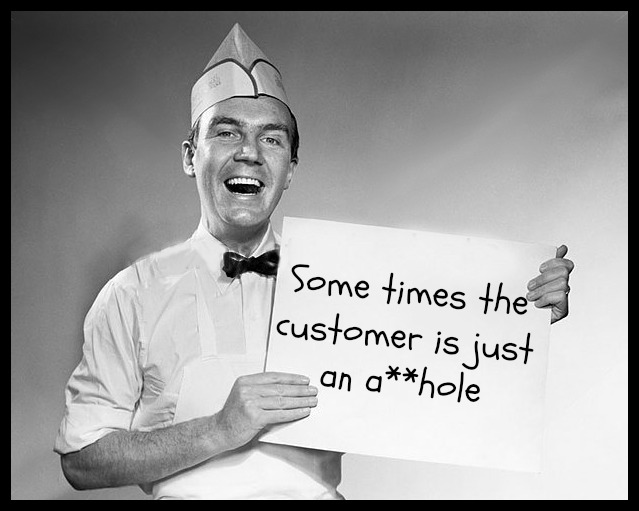 I don’t know why I agreed to pick up a shift on Monday, but I did. I never work on Mondays, but a week and a half ago, we had a server quit with two days notice. He said he got a new job as a postal carrier and his first day was December 26th. Never mind that the postal service was closed on December 26th observing Christmas. I mean, if you’re going to lie, at least do some fucking fact-checking, kid. So boom, he quit three days before Christmas and I was asked if I could pick up a shift. My boss, knowing me very well, happened to give me my Christmas present of a bottle of tequila and a box of Ferrero Rocher chocolate minutes before he popped the big question. Of course I agreed.

I arrive to work on January 2, not sure if I am serving or bartending. Bartending is something I am quite comfortable doing at home, but at the restaurant it’s different. The restaurant has silly things like recipes and limits to how many ounces of liquor goes into a cocktail. I tell my boss I would rather wait tables this evening. This is when he tells me that who ever is serving tonight will be training a new server who will be replacing our lying future postal worker.

“Oh, I guess I can bartend then,” I say. “Training sucks. I hate dealing with new hires.”

“Hi, I’m (name I already forgot). I’m training tonight,” says a quiet girl I had not noticed sitting at Booth 9.

The other server shows up ten minutes later. We agree that I will show New Girl the opening sidework if he will set up the bar for me. She will follow him while I will stand behind the safety of the bar encouraging people to order beer and wine.

“The first person who orders an Old Fashioned is going to be severely disappointed,” I think.

The night goes without incident. Closing at 10:00 on Monday instead of 11:00 like I am used to is the one saving grace that gets me through the night. The most complicated drink I am asked to make is a daiquiri that is requested by one of my friends who mysteriously heard that I was bartending this night. I also make a Pimm’s Cup which makes me wonder, “who the fuck orders a Pimm’s Cup in January?”

By 9:15, it looks like the evening will be an easy one. And then at 9:20, three men come in for dinner. I suspect that one of them is who called me earlier asking how late we server dinner. I am grateful they are showing up 40 minutes before closing time. I begin breaking down the bar, preparing myself to waltz out of the door at 10:00 sharp. At 9:55, I mosey back toward Table 16 to see how close they are to getting the hell out when I notice that their food is just now being plated.

“What the hell? Why have they not even stared eating yet?” I ask the other server.

“They didn’t want to order. I finally told them at 9:50 that we close in ten minutes and we needed to get their food in.”

Of course they ordered the roasted chicken which is the one thing on the menu that takes the longest. They get their food knowing that we have been closed for twelve minutes. I do my best to not glower at them, but I can’t help it. It’s like my facial muscles have involuntarily contracted into a unending scowl that is permanently etched onto my face. My neck won’t let me look any other direction than the table of the three men who are discussing singers, musicals and Juilliard. Ordinarily, these topics would make my face light up with joy, but not tonight. At 10:40, I leave the bar and start clearing their table. Thankfully, they ask for their check and then pay it immediately, saying “we know you guys are closed.” And then they sit. And sit. And sit. At 11:00, they are still there. They care not that the candles have burned out, the kitchen has been cleaned, the trash has been emptied and the the lights in the kitchen are off. We have sent New Girl home for the evening.

“This is so fucked up,” I say to the other server. “Who the fuck does that? How can anyone sit in a restaurant for an hour after it’s been closed? What a bunch of assholes. This pisses me right off. I mean, seriously…”

“You can go home if you want. There’s no reason for us both to wait here,” he says.

Unsure if he is really that nice or if he just wants my Negative Nancy ass out of his perennially positive space, I jump at the chance to leave. We pool tips, so technically, we are both supposed to stay until the end.

“Totally. The paperwork is already done, I’m just waiting to re-set their table. I’ll take care of it.”

I give him my thanks and bolt the hell out of the restaurant, knowing I have just experienced the first asshole table of 2017.