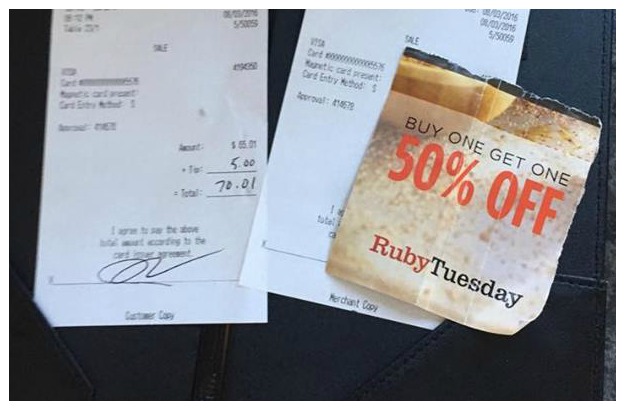 When it comes time to tip, we don’t want anything other than actual money, is that understood? I do not know how to make this any clearer. If the check is $65.01, the correct tip, assuming the service is up to par, should have been about $13. You want to know what the tip should NOT be? It should NOT be five fucking dollars and a goddamn 50% off coupon from Ruby freakin’ Tuesdays.

The waitress who sent me this photo is not allowed to say what she truly feels because she probably had to sign a silly little social media contract that prohibits her from doing so. I, however, signed no such agreement and can tell you exactly what I think about you:

You’re a cheap asshole. You may think that a 50% off coupon can be worth a lot of money but your waitress can’t pay her phone bill with a coupon. Last time I checked, T-Mobile was not accepting Ruby Tuesday coupons even if it does mean the Shrimp Shack Platter is going to be half-off the regular price. And you are assuming that the waitress wants to even go to Ruby Tuesday. No waitress wants to go to Ruby Tuesday unless she’s on the schedule to work there. If you think the coupon is such a great idea, maybe you should take it there, order a couple of plates of Hickory Bourbon-Glazed Pork Chops and with the money you save, you use it to tip your waitress. How about that?

Over the years, I have seen people get tipped with AMC movie passes, Starbucks gift cards, leftover food, cute little sayings and foreign currency. None of that works because none of those things are useful money, which is what servers want. Imagine you are at work and when your boss hands you your paycheck, it is only half the amount you normally expect. You’re all, “Hey, what the hell, Mr. Wal-Mart Manager? Where’s all my money?” And then your manager is all, “Oh, don’t worry it, I made up for it with this big envelope of value!” And then she hands you a manilla envelope full of coupons she clipped from the Sunday newspaper. “If you use all those coupons, they’re worth over $100!” she tells you. You open the envelope and find coupons for tampons, Steak-Umm’s, mayonnaise and Shasta Cola. You are not happy, right? That is how you made your waitress feel by leaving a Ruby Tuesday coupon.

People, please keep your coupons. We don’t want them. We want money so we can pay our bills and know that we did a good job of serving you. For you to leave anything else is rude, inconsiderate and asshole behavior. A Ruby Tuesday coupon is worthless to us. (No offense to Ruby Tuesday…I’m sure your Shrimp Fondue is amazing…)