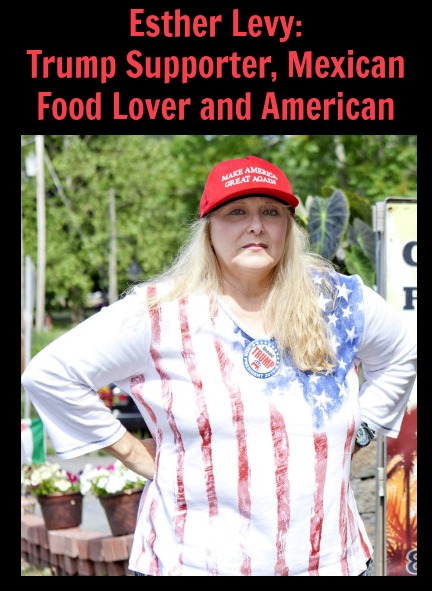 Once upon a time, a woman named Esther Levy decided that more than anything in the world, she wanted some enchiladas. She went to her closet and found the ugliest shirt she could find and decided she was too hungry to bother fixing her hair so she grabbed a “Make America Great Again” cap and slapped it on top of her head. “Good, that’ll cover up my roots,” she thought as she headed toward Cancun Inn Restaurant in Sugar Loaf, New York.

On the way, she picked up her friend, retired judge Alvin Goldstein, and they simply could not wait to have sangria and Mexican food at a place she had been a regular customer for 25 years. At some point before they got to the restaurant, Esther found a “Trump for President” button that was buried underneath some garbage in her car. She pinned it to her shirt. “Good,” she thought. “That’ll cover up that stain from last night’s Ben & Jerry’s binge.”

Once seated in the restaurant, all was right in the world. The friendly waitress took their drink order as Esther and Alvin smacked their lips in anticipation of sangria, enchiladas and a country where there would be great big wall separating them from country whose food they loved so much. Moments later, the waitress returned, but instead of carrying two glasses of sangria, she had nothing but a big ol’ bowl of “I can’t serve you.”

According to Esther and Alvin, the owner of the restaurant told them, “We don’t serve Trump supporters here. Get out of here and never come back.”

Mortified, and still craving queso dip, the two skulked out of the restaurant and then did what anyone would do who had been asked to leave a restaurant: they called the press and the police. Well, the police told them what you would think a retired judge would already know, which is that a private business can refuse service to anyone they choose.

In a Facebook post, the restaurant has responded saying that the pair was asked to leave because “they were being rude to the staff and rowdy due to intoxication.”

How will we ever know what truly went down? All we know are the facts:

What do you think really went down?

19 thoughts on “Trump Supporter Kicked Out of Mexican Restaurant”