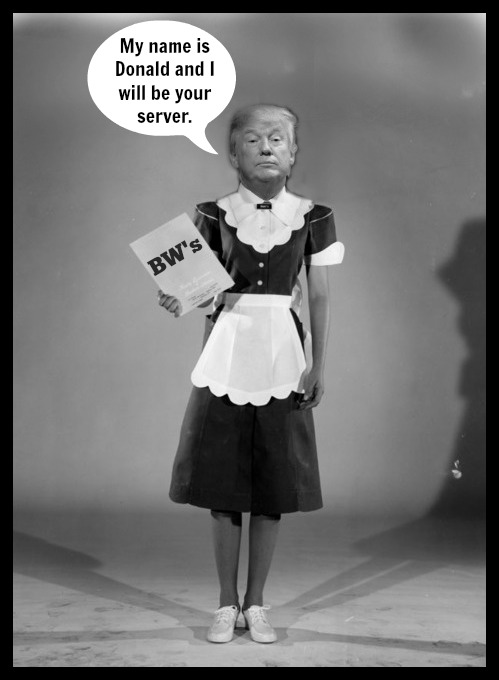 Since all I see on my Facebook feed and TV these days are stories about our presidential election, I have decided to dip my toe into the political cesspool and imagine what each of the candidates would be like if they were a server. Today we shall begin with Donald Trump.

Hello, my name is Donald Trump and I will be your waiter tonight. Before I let you say anything, I want you to know how honored I am to be here. No, seriously, I love customers, I really do. And even though I see a woman at this table who is not that attractive, I am still going to serve her. I just ask that next time she tries a little harder when she comes in. I mean, would it kill you to put on a little make-up? Anyway, I wanna let you know what our specials are tonight. First off, the portions are huuuuuge, I mean, they really are spectacular We have a pan-seared bald eagle breast served with Yukon gold potatoes. Now, the potatoes aren’t really gold. I guess someone just called them that once, but I know gold, and these are not golden potatoes. If you want some solid gold potatoes you’ll have to visit one of my hotels in Las Vegas. They’re absolutely stunning, really. The special also comes with a side of English peas, because this is America and everyone speaks English, even the peas. We are a little bit short staffed tonight because our dishwasher didn’t show up to his shift after he had some trouble scaling the wall I had built last week. It’s fine, he was just a Mexican who was stealing jobs from Americans, but as of now, we have not been able to find anyone who will take his low-paying job with horrible hours. What are you gonna do? We are also short two bussers, Aamir and Ibrahim, because I shipped them back to their own country even though they were both born here in the United States. They were great busboys, really great, but they seemed a little bit shifty to me so they’re outta here. Now I do want to tell you that I am very qualified to be your waiter. True, I have never waited tables before nor have I wanted to do it before a few months ago. In fact, I have never really paid that much attention to the people who bring me my food. But I have eaten in restaurants and I own a few so that makes me the best waiter anyone will ever see ever in the history of time. I will carry out so many plates of food, you won’t believe it. I’m gonna bring out so so many plates that people are gonna say, “Donald, it’s too many plates.” And by the way, I don’t use trays because my hands are so massive that I don’t need trays. I do wanna tell you one other thing. If you order the pasta, I will not be serving the parmesan. I want you to do it yourself, because it’s time we make America grate again. Okay, I love you. Thank you. And good night. You can Tweet me your order when you’re ready.

15 thoughts on “If Donald Trump Was Your Server”