When can we officially call something a trend? When it keeps happening over and over again and people are still enjoying it? I suppose so and that seems to be the case with restaurant owners standing up against their own bad Yelp reviews. It happened again, this time at Iron Horse (here is their Facebook page) here in NYC, a noted dive/biker bar known for rowdy female bartenders and cheap beer. (Obvs, I’ve never been there.) But a woman named Megan B. popped in during a trip for Canada and she absolutely hated it:

“Wouldn’t recommend this to eat or for a quiet drink. I met some friends here at 3pm in the afternoon and the music was so loud we couldn’t hear each other. The service was terrible just to get a drink at the bar. The food was also terrible.”

Poor, poor Canadian Megan B. Perhaps she was looking for Molson Golden or some Moose Nachos and when it wasn’t on the menu it really bummed her out, eh? But guess what, Megan B. You’re not in Canada anymore. You’re in New York City and this is what it’s a-boot.

The owner of the bar decided that the bar needed to be defended so a response was crafted that called her out. He even looked up her previous reviews and discerned that Megan B. typically reviews places that are nothing like Iron Horse and he called her out on it:

“It seems you like quiet coffee shops and fancy food, none of which we have ever advertised to provide. Please note our Yelp description even says:

He goes on to give her one star as a customer and advises that she “align your expectations with the type of establishment you are visiting, and do more research before you decide on a place that will work for your personal preferences.”

Basically, he then just dropped the mic and walked away and Megan B. has since deleted the review. (God bless screen shots.) 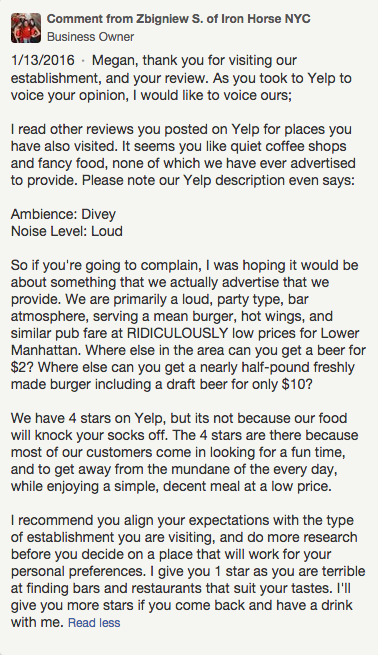 It appears, that after years of Yelpers feeling like they have all the power, restaurant owners are realizing that they can take the power back and make Yelp work for them. I look forward to the next epic take down.

I leave you with the most wonderful Yelp video in the history of time, compliments of South Park. (And if you want a chance to win a free copy of my book, click here, cheap bitches.)