As I am wont to do sometimes, I was trolling through the Facebook pages of major restaurant chains earlier this week. I came across a couple of posts from complaining customers that caught my attention and since I am a desperate attention whore and not very creative, I decided I would blog about one of them today.

“Albert” went to Red Robin and had a miserable time because he found a bug in his salad. He says that halfway through his meal he discovered the bug crawling out of the salad and it was so revolting that it made him run to the bathroom to puke it all up. The manager was very apologetic and comped his meal and even offered to give him some food to go, but it was too late for Albert; his day was ruined. Ruined, I tell you! He claimed to be on the verge of throwing up again, but somehow Albert found a reservoir of strength and was able to go to the Facebook page of Red Robin to alert the world to his awful experience. Click here to see the original post. 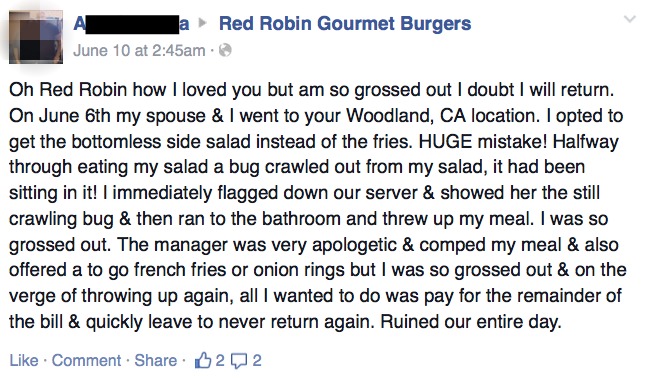 Here’s what I want to know: what the fuck else do you expect them do for you? They already apologized, they didn’t make you pay for it and they tried to give you some goddam french fries and onion rings too. What else do you want, a blowjob? Jesus Christ on a Crispy Arctic Cod Sandwich, Albert calm down. And seriously, a live bug in a salad is not that bad. Bugs kinda live in grass and plants so to see one in a salad should tell you that the salad is super fresh. It’s not like you found a dead roach underneath a brown piece of Romaine or you found a live rat crawling around amongst your radishes. It’s a little bitty bug that that has probably been though hell and back as it went through being triple washed, put into a plastic bag and then finally smothered in salad dressing to be served to some whiny asshole in Woodland, California. I’m sorry you almost threw up, but can we show some fucking compassion for the bug? As of late, I have been accused of not showing both sides of the story, so I have done some research and contacted the bug that was in your salad to hear its story. He released the following statement:

“What up? My name is Armando and I’m the aphid that was found in Albert’s salad at Red Robin. I would like to publicly apologize for simply living my life and ending up on a plate of mesclun. My bad, yo. While I got the feels and everything for Albert, I also got to say that the experience was not exactly a day at the beach for me either. This dude was chowing down on that salad so fast and alls I was doing was trying to stay away from his fork. Damn, this man eats quick, y’all. There I was just chilling out next to a piece of hardwood-smoked bacon and then next thing I know, I sees this fork comin’ at me. I was all, ‘oh shit, Aisha, get out the way, here it comes again!’ Aisha was my baby mama and now she’s gone. Taken up on that fork with a piece of bacon and I ain’t seen her since. When Albert spotted me, I was just trying to see where my girl went, but now I know. He ate her. Now I am left alone in this world trying to raise ten baby aphids. We had 15 but five of them went missing that day in the salad so I can only assume that greedy ass Albert didn’t just eat my girl but he also ate five of my kids. And he’s the one who’s traumatized? Red Robin didn’t offer me shit and since I don’t have Internet right now and I lost my iPhone, I can’t even go to their Facebook to complain. Thank you to Bitchy Waiter for being my voice. Albert, I hope you have gotten over your terrible experience and I hope Red Robin sent you some coupons for some free dessert or some other bullshit like that. As for me, me and my kids are just getting by day by day. It’s all I can do. I’m damn bug. I ain’t got no rights. I bet you stiffed your server too, am I right? Fuck you, Albert.”

And there we have it, ladies and gentlemen. Albert had a bug in his salad. Red Robin tried to make it better. Albert still freaked out. And no one cares about Armando and his ten aphids.