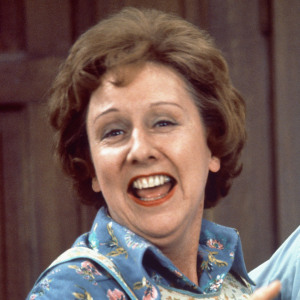 We lost a cultural icon this weekend when Jean Stapleton died in her New York City home at the age of 90. How does this have anything to do with The Bitchy Waiter? Hold on, give me a second and I will come up with something.

Okay, got it. She made her Broadway debut in 1953 playing a wise-cracking waitress in a play called In the Summer House. Seeing that she played a waitress at least once in her illustrious career gives me full license to write about her on a blog called The Bitchy Waiter, right?

Jean Stapleton had an amazing career but the world knows her best as Edith Bunker from All in the Family which ran on CBS from 1971 to 1979. When she died on Saturday, so many of us who are of a certain age were saddened by the news. I was told at work by someone who must have been wrongfully checking their Facebook while on the clock. “Hey, Jean Stapleton died,” he said as casually as telling me that Table 7 needed another refill. My heart broke a little bit, but why? I never knew Jean Stapleton but it didn’t stop my eyes from filling with tears. I quickly brushed them away so no one would see me crying about the death of a 90 year old woman I didn’t even know. It wasn’t the first time I had hidden tears that came because of Jean Stapleton.

On March 19th, 1978, I remember watching the episode of All in the Family that had Mike and Gloria moving to California and saying good bye to Archie and Edith. As they all stood in the doorway trying to find the words to say goodbye, I held back my tears so that my parents wouldn’t think that they had a sissy for a son. Gloria and Mike finally left and we heard the sound effect of their cab driving them to the airport. I watched as Archie and Edith faced their new existence. Edith saw Archie crying but didn’t want him to know that she knows he’s a big old softie.  She brought him his familiar can of beer but they were lost. Unsure how to handle the deafening silence in the house, they sat on their chairs, alone together. The camera pulled back revealing just how alone they were in the big empty house. There was no audience applause and no laugh track; just the two of them sitting there with unbearable looks of sadness on their faces. The screen faded to black in silence. This was when I politely excused myself from the living room.

“I’m gonna go get some water,” I announced to my family as I headed towards the kitchen. Once I was safely away from the judging eyes of my brothers, I let the tears flow. I stood there in front of our Harvest Gold refrigerator and cried, so sad for Edith and Archie Bunker. Silly of me to think that my parents didn’t know their eleven-year old child was crying in the kitchen over a TV show, but just like Edith did for Archie, they pretended not to notice.

I know a lot of people who are sad that Jean Stapleton is gone. We all felt like we knew her. Maybe it’s because she was such a fixture on our television screens for so long but more than likely, it is because everyone has someone in their life who reminds them of Edith Bunker. It might be an aunt or sister or your mom who has that same attitude that Edith had. She loved her family despite their flaws. She rarely had an unkind word for anyone and when she did it was hard for her to admit. She was lovable and could tolerate anything. In my family, it was my grandma who we all thought reminded us of Edith. Maybe it was little bit because of her physical appearance but it was also the way that she sometimes could be forgetful or easily confused but always happy. When Jean Stapleton died, everyone who grew up watching All in the Family lost something too. We can’t help but think back to when we were thirty years younger and, depending on our age, either living with our parents or living with our children. For me, it reminds me of a time when my world revolved around my family; my Mom and Dad and two brothers. I was a kid watching television with his family, albeit really mature television. We don’t realize how good we have it sometimes, but thinking back on it now, was it ever better than sitting on the couch with my whole family watching TV? Jean Stapleton doesn’t just make us think of All in the Family, she makes us think about our own families.

So, no this post has nothing to do with waiting tables, other than the fact that we know Jean Stapleton played a waitress on Broadway once. But this post does have to do with the daily goings on of a waiter who is sometimes bitchy and sometimes bitter but is today very very sentimental. Rest in peace, Jean Stapleton. The world will miss you.