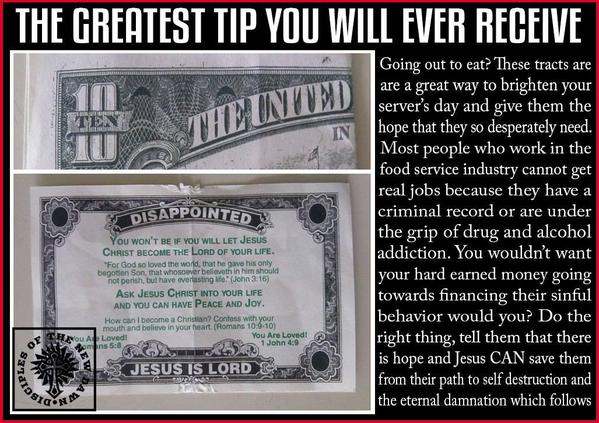 There is no server in the world who wants to get a piece of literature expounding the wonders of Eternal Life with Jesus Christ our Savior, especially when that piece of literature is not accompanied with a 15-20% tip. It’s been said before and I will say it again: “Jesus loves me, this I know, but Jesus doesn’t pay my rent.”

A photo has been making the rounds on social media and it has caught my eye enough times to feel the need to address it. It comes from a Facebook page called Disciples of the New Dawn and it’s ether a cult or someone who is a desperately needy Facebook troller who craves attention, which, now that I think about it, sounds exactly like the Bitchy Waiter Facebook page. The photo says:

Going out to eat? These tracts are a great way to brighten your server’s day and give them the hope they so desperately need. Most people who work in the food service industry cannot get real jobs because they have a criminal record or are under the grip of drug and alcohol addiction. You wouldn’t want your hard earned money going towards financing their sinful behavior would you? Do the right thing, tell them that there is hope and Jesus CAN save them from their path to self destruction and the eternal damnation that follows.

Okay, so whichever Disciple of the the New Dawn of the Planet of the Apes created that image is an expert troller of epic proportions because they pushed every single button that is going to piss off the service industry. Not only do they imply that we are all total losers who have no other job option, they say that we are all drug and alcohol addicts. How rude. I can stop drinking whenever I want to stop, I just have to keep drinking to be able to tolerate assholes like this in my section. If I wasn’t somehow buzzed, who knows what I would do in retaliation for a receiving a Jesus tip. And then they want to add a little extra salt to the wound so they make sure to refer to waiting tables as something other than a real job. Well, the joke’s on you Disciple of the New Dawn Wells, because there isn’t any salt since I never refilled the salt shakers, so ha ha!

The photo is presented on their Facebook page with a story as well:

Friday evening seven members of The Copperhead Vanguard stopped at a local chain restaurant for supper after they completed their supply run. Upon leaving they were followed out the door by their waitress who accosted them for leaving some of our literature behind instead of a gratuity. Sergeant Major Fletcher, politely explained to her, that her real treasure lies in Heaven and that rather than be greedy she should be grateful for Christ’s gift of everlasting life (Matthew 6:19-20). She continued to be rude and abusive, so Master Sergeant Jacobs went inside and spoke to the manager. She alerted the manager to the her unacceptable conduct and she was rightfully terminated on the spot. This is the cancer that liberalism spreads; people in lesser stations in our society have become insufferably greedy and believe they are entitled to what others work hard for. Simply put, she was unable to understand why she didn’t deserve a tip. This is Obama’s America in a nutshell folks. The food wasn’t prepared correctly, it arrived unacceptably late, several times she very rudely interrupted them while they were composing their status update emails and WORST of all they overheard her telling another waitress that she was quote “Hella Weeded”. If you want extra you need to put forth some effort into your job, getting high on the job and treating your customers poorly isn’t the right way. We pray that she learned her lesson and will try harder if she finds another job. God’s Peace.

Again, this whole thing is probably completely made up and the Disciples of the New Delta Dawn are just trying to get attention. I mean really, who would think that “hella weeded” means getting high on the job? Whether it’s real or not, enough people are seeing the image who will automatically assume that it’s all true and it is my duty to to make sure that even more people see it who will know they are full of shit.

If your server is rude and does a poor job of serving you, then absolutely, that server does not deserve a 15-20% tip. No server is going to treat a customer like shit and then be surprised when they get stiffed. However, no customer should ever think that a piece of paper explaining how to get into Heaven is a decent tip. It’s not. All that happens to that pamphlet is that it goes into the garbage with dirty napkins and leftover chicken bones. It does not go into the bank and it does not pay bills and it does not spend. Leave them at home. As for the Disciples of the New Dawn of the Dead, leave us servers out of your preaching. We don’t need you standing up for our souls and we certainly don’t need you affecting our tips. As for everyone who is reading this, here is their Facebook page and here is their Twitter. I think you should all go see what they are about and make your own conclusions, but my conclusion is that the Disciples of the New Dawn are crazy fucks who have no respect for anyone in the food service industry and they can eat my pud.

Or maybe it’s just a satirical website and they’re really really good at what they do.

40 thoughts on “The Worst Tip on God’s Green Earth”