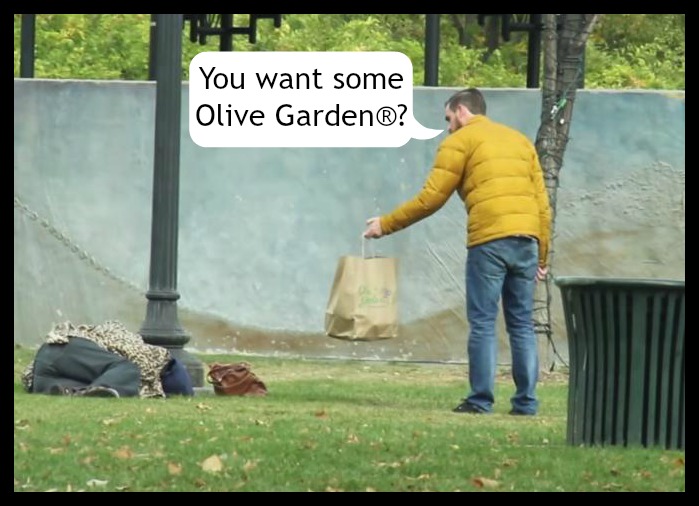 Have you seen the video that is going somewhat viral about the guy from Utah who used his Never Ending Pasta Pass from Olive Garden to commit random acts of pasta? He said he bought the pass and then was like, “Whoa, I can’t eat this much pasta. I’ll give it away to my friends and the homeless.” He wrote a blog about it and of course he made a video too because in this day and age, nothing is for real until it’s been documented on a cell phone and then put on the Internet.

The guy’s name is Matt Tribe and the Pasta Pass was used a total of 125 times. The pass was only good for 7 weeks, but he definitely got his hundred bucks out of it. According to his blog, he went to a total of 11 different Olive Gardens, one day using it 9 different times. And on another day he visited 5 different Olive Gardens. In my quick Google search, I only see 10 Olive Gardens in the whole state of Utah so I guess one day he made a quick hop over to Wyoming or Idaho to pick up some bread sticks and fettuccine alfredo. He made a list of every person he gave food to and of the 125 times, it looks he gave food to the homeless on 10 different occasions. According to the list, some chick named Mandy scored free pasta 11 times so I think it’s safe to assume that Matt thinks more of Mandy than he does people who sleep in the park. Nice, Matt, real nice.

There are lots of people who think this is a heart-warming story that shows how mankind can rise to the occasion to help those who are less fortunate than others. Then there are a bunch of Bitter Betty’s out there who say the whole thing is a marketing ploy by Olive Garden just to gain sympathy for a company who is experiencing a decline in sales. I watched the video many many times and I might be one of those in the Bitter Betty camp. (Typically, I hate camping, but if there are Smores involved with a bunch of Betty’s who are bitter, then sign me up.)

The video is very well done and Matt thanks his friend Ben Taylor who is one of the “most talented filmmakers in Utah” for helping him with it. But I have to question a couple of things. Matt says that he didn’t really come up with the whole “random acts of pasta” until after he got his pass, claiming he decided he couldn’t eat that much pasta himself. Also, he writes that he arrived home from work on September 19th to discover a little package from UPS sitting on his porch. Was his friend Ben sitting inside the house with a camera waiting for Matt to get home to open the envelope so that moment could be filmed? Why was that filmed if the idea had not sprung yet? And why did he wait a full two and a half weeks, until October 10th, before giving the food to a homeless person for the first time? If his intent from the very beginning was to feed the homeless and make a video about it, I could understand why there would be footage of him opening the pass, but wouldn’t he have started distributing the food to the needy right away? I guess Mandy was more important. In the video, he says “Olive Garden” about a hundred times. Okay, it’s really only 8 times, but c’mon, if I was giving food to a homeless person, I think I would just call it “food” or “pasta” and not “Olive Garden.” And I guess he just happened to be wearing a mic pack that day so that everything would be audible and clear  just in case they were going to make this video go viral. It also seems a bit suspicious that the video is the only one Matt has ever posted on YouTube and this one just happened to go up right around Thanksgiving. Olive Garden has denied any connection to the event because of course they would. Let’s think about something else. Is this what Olive Garden had in mind when they offered the pasta pass? For people to get 125 meals for $100, sometimes up to 9 meals in one day and then give it away to people? I doubt it. 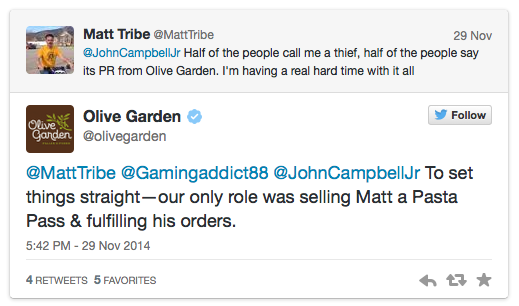 Bottom line is that Matt made his friends happy by giving them free food and 10 times out of 125 (8%) he gave it to homeless people and no one one can say that’s a bad thing. The people in the video seem appreciative unlike the homeless man I approached a few years ago after a pizza party with a whole pizza to offer him. He asked me what kind it was and when I told him it had mushrooms on it, he turned his nose up at it and told me to go the fuck away.

I want to believe this is legitimate and that it was fun for Matt, but it seems like it would take a lot of time and gasoline to be able to do this every day. I mean, the Olive Garden in Riverdale, Utah is 49 miles away from the one in Logan, Utah and we don’t even know where the 11th Olive Garden he went to was. Did Matt just take a few weeks off from work to drive around the Beehive State without a care in the world about employment? Who knows? I want to believe, but I’m just too much of a Bitter Betty. What do you think?

You can visit Matt’s blog here and find him on Twitter here.