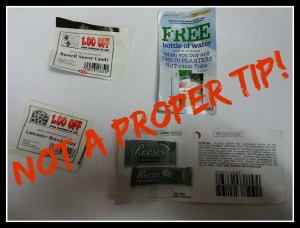 This is not a tip.

You want to know what your server wants for a tip? Money. Preferably cash money but if you want to put it on a credit card that’s fine too, we’ll take it. We want 20% of the total of your check. You can bitch and whine about how you think that the restaurant should be paying the server’s salary and it’s not your responsibility, but you know what? If you live in the United States, this is the culture we have so for whatever reason, it is your responsibility. Suck it up and deal with it or move to Europe where servers make more per hour and tips aren’t as important as they are here.

You want to know what we don’t want for a tip? A pile of fucking coupons. What are we supposed to do with those? “Hey, Mr. Landlord, thanks for the roof over my head for the last thirty days, it was great. I appreciate it so much and I want to show my appreciation by giving you this pile of coupons that some cheap bitch left me last week.” No, it does not work that way.

Someone sent me this photo and this is what they actually received for a tip: coupons. A lady took the time to go through the weekly circular of the Piggly-Wiggly or whatever, find some scissors and cut these out for her server. Or maybe she didn’t have any cash and she pulled out her coupon wallet and “made it rain.”

$1.00 off Lancaster Brand Pizza: I don’t even know what “Lancaster Brand Pizza” is. Don’t get me wrong; I don’t want a coupon for Stouffer’s or Totino’s either so don’t get any bright ideas. But a dollar off a fucking frozen pizza? Wouldn’t that pretty much make the pizza free? “But it’s for cheese, pepperoni or combo,” I can hear Coupon Queen saying. “It’s such a great deal!” No. it’s not a great deal. It sucks but probably not as much as a lLancaster Brand Pizza does.

Free bottle of water: Wow, it’s up to a $1.19 value, but you have to buy something called  a Planters NUT-rition Tube before you can claim that valuable bottle of water. A NUT-rition tube? What is that? A tube of nuts? It sounds like something Mr. Peanut would buy at a sex shop along with some Planters Lube and a cock ring for his Macadamia nuts. No thank you.

Reese’s Peanut Butter Cup: Another candy coupon, great! The person who sent me the picture pointed out that there is a whole punched into this coupon so it was invalid. That’s right, the bitch tipped with a used fucking coupon. She probably still had Reese’s Peanut Butter Cup breath when she sat down to order. Then again, that peanut breath may be from the blow job she gave Mr. Peanut out in the parking lot.

People, don’t insult your server by leaving coupons as a tip. Those four coupons were for a total of $3.19 so it’s a shitty tip even if they wanted to use them. I don’t mind people using coupons such as a lukes lobster coupon, to get money off their bill. But not for a tip. Don’t assume that your server is going to be grateful for bestowing upon them the opportunity to get items from the grocery store that they probably don’t even want. It’s rude, disrespectful and cheap. In addition to all those things, you run the risk that your server is going to take a picture of it, send it to The Bitchy Waiter who will then make fun of you for performing fellatio on an animated mascot for nuts.

Bottom line: do not ever leave coupons as a tip. 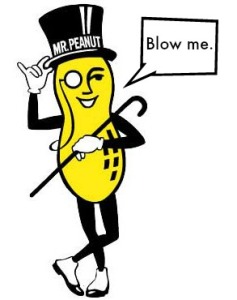 This is a repost after the original posting of this was accidentally deleted. 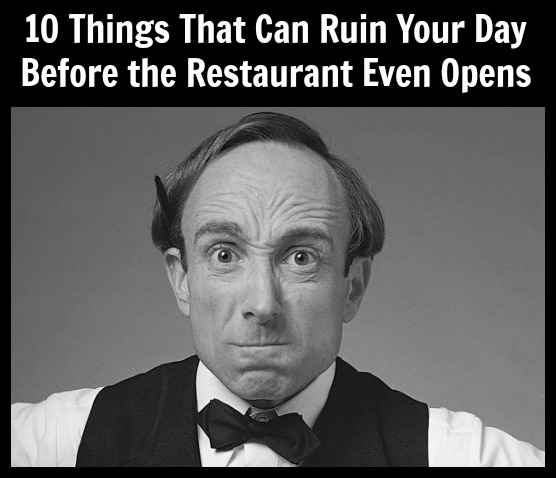 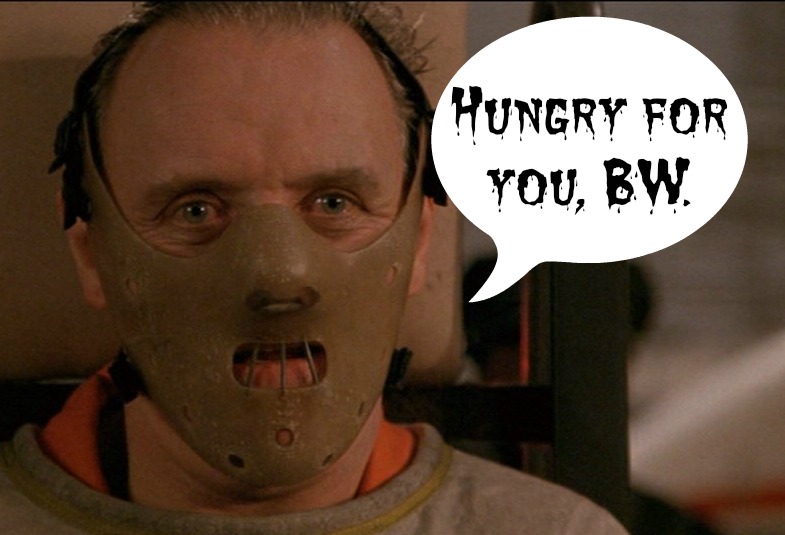