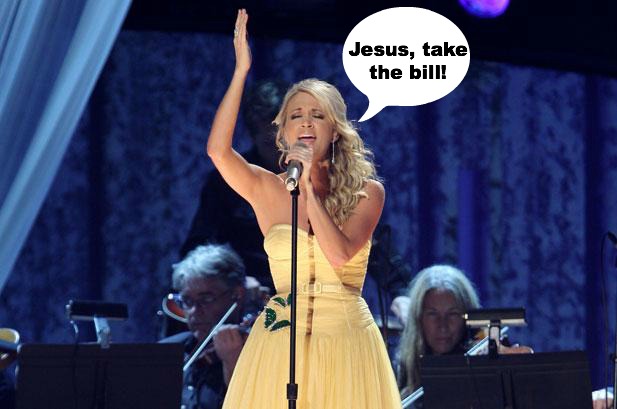 According to news reports, a woman in Oklahoma didn’t want to pay for food and drinks at a local restauant and told the manager that her husband would come in and pay for it instead. She said that her husband was Jesus Christ. Meanwhile, Carrie Underwood was heard screaming, “No, bitch, Jesus will take the wheel, not the bill!” (In related news, we now know what Carrie Underwood’s next single is going to be called.)

Kristi Rhines strolled into El Chico for some chips, salsa, enchiladas and a couple of margaritas but when she reached into her purse, the devil done snatched all her money away. Rather than dine and dash, she insisted that hubby Jesus “would be able to walk in and produce U.S. currency to pay for her bill.” When Jesus didn’t show up, police were called and Kristi was charged with fraud and booked at the county jail.

Oh good lord, Jesus is not going to be paying for your dinner, girl. Do you think if the Second Coming is finally here that Jesus’ first stop is going to be at an El Chico in Lawton, Oklahoma? We all know the first place He’s going to go is Chick-Fil-A to slap the shit outta those hos for acting like damn fools and saying gay people don’t deserve fried chicken on a white bun with a pickle slice. And since Kristi couldn’t produce a marriage license, it seems doubtful that she’s even married to Jesus. Her last name is Rhines which must mean she didn’t want to take his last name. You can’t take the Lord’s name in vain and you can’t take it in marriage either, is that it Kristi? I think Kristi H. Christ has a nice ring to it, but that’s just me.

Maybe Kristi is crazy and maybe she’s not. Maybe she really did get married to Jesus. Jesus loves me, this I know, for the bible tells me so, but maybe he also loves some poor white trash chick who has a hankering for queso. 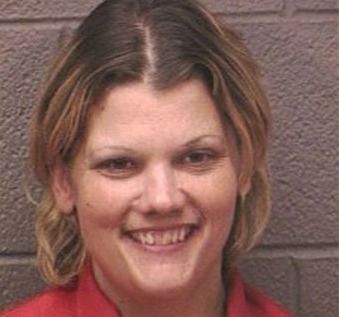 I suppose it’s possible that they met on Christian Mingle (Jesus has an eternal membership) and got married. Maybe their first date was a walk on the beach and when she got tired of walking, Jesus carried her the rest of the way and left only one track of footprints in the sand. Their second date could have been a supper at Cracker Barrel where they shared a Haddock Dinner (it was Friday, so no meat.) After two dates, Krsiti was ready to let Jesus into her heart and into her panties, so he popped the question and they got married at the Lord’s House. Her father gave her away and God himself officiated the wedding. God took care of the catering, but all He served was one lousy loaf of bread that he kept multiplying. The wine was watered down.

My bet is that Kristi simply didn’t want to pay for her food and decided to go big or go home. “Yeah…ummm…Jesus is my husband, sure.” I guess we will never know the truth about Kristi and her love for Jesus and guacamole. Jesus came into my section once and I waited on Him, so if I see him again, I will ask about this chick.

6 thoughts on “Jesus is Nacho Husband”