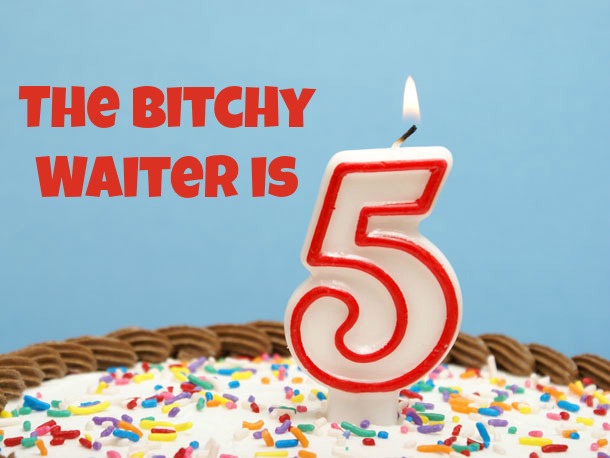 Once upon a time, there was a little bitchy waiter who worked at a diner on the upper East Side on Third Avenue in New York City. Maybe, it was Second Avenue, he doesn’t remember. He worked there about four days a week with Bill and Lauren and Laura and it was good. They would sip mimosas during brunch and enjoy each other’s company. After each shift, the little waiter who was a bitch would put a frozen margarita into a plastic cup and ride the bus home back to Queens while copping a buzz.

“I’m sorry, I can’t turn off the TV. It’s always on and there are a lot of people watching this game,” he told her.

The woman accepted his explanation, but when she left she decided to show her dissatisfaction in the form of a crappy tip. The waiter was very upset and went home to write a story about her and place it on the Internet. That night, he started a blog and called it The Bitchy Waiter. That day was December 8, 2008 and that waiter was me, bitches!

Today is the five year anniversary of this blog. When I wrote that first blog post, I sent it to a couple of friends thinking they would get a kick out of it. Well, that simple blog post has grown and grown and now look at where I am: at a different restaurant and still bitching about the same fucking shit that bothered me in 2008 and now dozens of people read this blog instead of four. I have come so far! (No. No, I haven’t…)

I just want to say thank you to everyone who spends any time reading the drivel that spews from my brain. Without you, there would be no blog and without this blog, I would probably have stuck a fork into a baby’s ass by now. This blog is therapeutic for me. That’s not to say, however, that I don’t worry that someday I may lose my cool and actually poke a baby in the ass with a fork. Until that day, please keep reading. I love reading comments so if you want to wish me a congratulations, please do so. You may also tell me any of the following:

Or you can just click the “like” button so I know that someone gives a shit, even if it’s just my mom. Thank you.

21 thoughts on “The Bitch Turns Five”