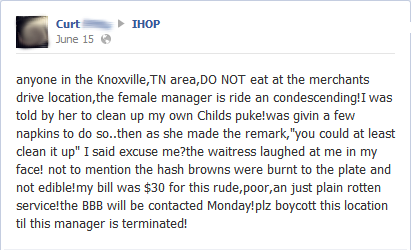 Curt is an asshole

Thank you to my friend Fran for sending me this ridiculous screenshot of a Facebook status that some entitled parent named Curt wrote. I guess the parent took their kid out for a fancy meal at their local IHOP and when the kid realized that the “fancy” meal was happening at IHOP, it threw up all over the fucking place. When the waitress and manager both told Curt that he needed to clean up the vomit himself, he didn’t like it. He promptly went home and did what all assholes do in a situation like that: he wrote on IHOP’s Facebook wall! I went to the IHOP Facebook wall to try to find the original post, but it seems to have been taken down. However, their wall is full of stupid ass complaints and if you need to kill some time, just go read it. (If you’re reading this blog, you clearly have nothing else to do with your time…)

Anyhoo, Curt got his panties in a twist and wants everyone to boycott this particular IHOP for making him clean up his own child’s puke. He also plans on calling the Better Business Bureau about it because they really care about shit like this.

In  addition to the horror of having to clean up the puke, the hash browns were burnt. Life just gets shittier and shittier for poor Curt, doesn’t it? What kind of parent lets their kid throw up all over the place at an IHOP and then gets pissed off when nobody wants to clean it up? It’s vomit, Curt and it belongs to your kid. Grab a roll of paper towels and start swabbing, asshole.

I walked into a subway car on the 6 train last week and immediately spotted a puddle of puke slip sliding its way across the floor. Happy that it wasn’t my own, I turned around and went into the next car. Two stops later, the conductor made an announcement that the train was being delayed as they attended to some “infectious waste” in car #7231. Curt, if the MTA of NYC calls it “infectious waste” and will stop a packed subway car to deal with it, why do you think a waitress making $2.13 an hour is going to deal with it?

So maybe it wasn’t best idea for the waitress to laugh in Curt’s face, but it was probably pretty funny to see a Rooty Tooty Fresh and Fruity plate covered in chunks of fresh kid vom. I went to the Yelp page of this particular IHOP and they only have two reviews and 3 1/2 stars. This must change. We all need to go to their Yelp page and say thank you to that manager who did not make the waitress clean up the vomit. We all know how miserable it would have been to clean that mess up. The waitress is already working at IHOP, isn’t that punishment enough? Must she also endure the cleaning up of infectious waste? Click here to go to their page and leave a review for them. Let’s see if we can change that paltry rating and make them get five stars.

As for Curt, I wonder how the rest of his day went. I imagine that after leaving IHOP, he headed on over to the Wal-Mart to pick up some new tires for his pick-up truck and while he was there, Curt Jr. vommed all over aisle 12. Curt went looking for someone in a blue vest to clean it up but could find no one except for the greeter at the front door who was about 75 years old and possibly mentally handicapped.

“Welcome to Wal-Mart. Have a nice day,” says the greeter.

“Yeah, my kid puked again. He done puked at IHOP this mornin’ and now he puked here and as soon as we leave I’m gonna take him over to the Arby’s so he can puke there too. Can you go clean that up?”

“That’s it! I’m calling the Better Business Bureau about you.”

Curt’s day was probably full of puke and disappointment just like his wedding night. Good luck, Curt. I hope things get better, but try to remember that servers are there to take your order, bring your food and make sure your dining experience is a good one. They are not there to clean up your kid’s vomit or any other bodily functions, so the next time you go out to eat, make sure you have already pooped, puked and blown your nose. Those are your responsibilities and not your server’s. Asshole.

26 thoughts on “Customer Expects Waitress to Clean Up Puke”