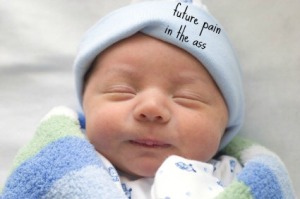 I can tell that it’s the first night out for this family with their newborn baby. It is wrapped in swaddling clothes with layers upon layers of blankets to keep it warm despite it being about 70° outside. The baby is roughly the size and shape of one of those industrial size cans of ketchup that are such a pain in the ass to open and its face still has that “I just squeezed out of a vagina look.” There is a blue beanie on its head telling me that it must be a boy because new parents are very specific about gender roles. Boys must have blue and girls must have pink. End of story. The baby is in a stroller that is larger than any of the two-tops in the restaurant and it is piled high with every conceivable accoutrement. They look as if they are planning a trip across the country when I know for a fact that they live two blocks from the restaurant. If there happens to be some Baby Wipes emergency in the course of the next forty-five minutes, these people are prepared. I watch as the parents coo and cuddle to the precious marvel that their seed and egg created when I notice movement under the table. There is another child of about five sitting there with his arms crossed. I surmise that this is the big brother and he is feeling neglected. His feelings are accurate. He’s sitting underneath a table alone while his parents ignore him and fawn over the new baby not nine inches away.

“Hello, folks, can I get you anything to drink tonight?” I ask.

“We’re fine for now,” says Mom. “This is our first night out with the new baby and we’re taking it slow. He’s only two weeks old but I was just dying to get out of the house. I’ve been cooped up in there for weeks. He’s sleeping right now so hopefully he’ll keep at it, but you never know, right? He’s a baby! But he’s our baby.”

“I’ll give you some more time.”

Too much information, lady. I just want to know if you want a drink. I don’t give a shit about your baby, your last nine months or how stretched out your baby-maker is. You just let me know when you want a Coke or something. I move to the sidestand to watch them for a signal that they may be ready for something other than the undying love of their newborn child. Meanwhile, the other kid has come out from under the table to sit in a chair. He looks dirty with a snotty nose and messy hair. He could be auditioning for a community theater production of Oliver. He reaches over to touch his little brother’s face and his hand is swatted away by his mother.

“Stop that, your hands are filthy. You were just crawling around on the floor!”

The neglected little boy sulks at his table and the mother fails to realize that the only reason her son was crawling around on the floor was because she had allowed it.

The family eventually decides that they are ready to order. Although I expect them to order a bowl of gruel for Sad Sack Son #1 they instead get him some mac and cheese with French fries.

“The baby doesn’t need anything,” she informs me.

I’m glad she tells me this because I am seconds away from ordering it a well done New York shell steak and a pint of Guinness, on the house of course, in celebration of it escaping from her uterus.

When I set the meal down before the unwanted child, I wait for the opening chords of “Food, Glorious, Food” and look around to see if a gang of street urchins are going to pop out of nowhere for a production number. I am disappointed that instead of a serving of musical theatre, all I get is a side of boob when it’s time for the baby to eat. I politely avert my eyes to offer a tiny bit of privacy, which is more for my comfort than the mother’s since she seems quite at home in Booth 16. Honestly, I wish she would breastfeed everyone in the restaurant because then I wouldn’t have any glasses to bus from the tables.

“Is there anything else I can get for you right now?” I ask. “More napkins? More water? Fresh ground pepper? An invisibility cloak?”

After everyone has finished eating and they pay the check, they begin preparation for the long journey home around the corner. The breast is packed away with the diapers, blankets, pacifiers and chew toys and they roll the special little angel out the door.

He dutifully follows behind them and as he walks past me, I am almost certain I hear him humming “It’s a Hard Knock Life.”