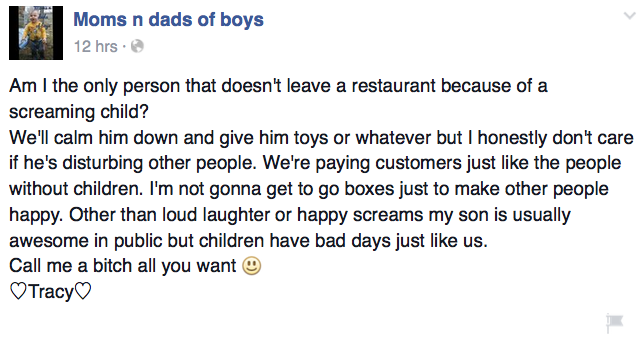 About a week ago, we all got our taints in a twist over the diner owner who yelled at a crying child in her restaurant. It stirred up lots of controversy and people mostly believed that both the parents and the screaming diner lady behaved poorly. I was just about ready to give that frazzled mom the benefit of the doubt when someone sent me the screenshot of a mom who made my taint fill with hatred all over again.

Am I the only person that doesn’t leave a restaurant because of a screaming child?
We’ll calm him down and give him toys or whatever but I honestly don’t care if he’s disturbing other people. We’re paying customers just like the people without children. I’m not gonna get to go boxes just to make other people happy. Other than loud laughter or happy screams my son is usually awesome in public but children have bad days just like us.
Call me a bitch all you want. 😀
♡Tracy♡

Well, Tracy, since you gave me permission to call you a bitch all I want, I gladly accept that challenge and shall begin now: Bitch, pleaseI No, you are not the only person who feels it’s alright to let an out of control child ruin the ambience for anyone who happens to be sitting within a ten yard radius of you and your devil spawn that fell out of your ham wallet, but it certainly does not make it right. What it does make you is a bitch. (Sorry, you said I could call you that all I want…). How can you say you “honestly don’t care” that you are disturbing other people? That makes no sense to me. Then again, I have never pushed an eight-pound human out of a hot pocket so maybe when that happens, it changes your brain chemistry and makes you forget common sense and decency.

Yes, you are paying customers (well, minus the coupons you got for making a complaint on the Facebook page of Applebee’s), but why does that entitle you to have no manners? If your child is making a scene in public, it’s your duty as a parent to try to calm him down and at least act like you give a shit about the rest of the human race, bitch. (That’s the third time I called you “bitch.” Seriously, thank you for the permission, it’s great.) And just so you know, whether your son is producing “loud laughs” or “happy screams,” most people in the restaurant are going to register that as annoying. I don’t care if he’s screaming because he’s happy or if he’s screaming because he’s upset. All I know is I don’t want to hear fucking screaming, bitch. (Four!)

You say that your son is usually “awesome in public” and that’s terrific, but if he is usually awesome, I would think that on those occasions when he isn’t, you would especially want him to behave because you know that he is capable of it. Nobody expects you to immediately ask for a to-go box and vacate the premises the second your son is having a bad day. What we do expect is that you at least try to show everyone in the restaurant that you will not tolerate screaming. For you to openly admit that you don’t care proves to everyone that you are a bitch (fifth time) of a mother and you deserve the ire and hatred that is surely being thrown your way.

Maybe there are plenty of other mothers out there who share your sentiments, but I find it hard to believe that there are many. I choose to believe that most mothers feel the opposite of you and would never freely state that they don’t care if their screaming child is disturbing other people. In other words, I bet that most mothers out there aren’t bitches like you, bitch. (Six times. Seven times.)

Tracy, thank you for letting me call you bitch so many times. It was nice to finally call someone a bitch on the Internet and know that they won’t mind. You’re awesome, bitch. (Eight times!)

Here is the Facebook page of Moms n dads of boys if you want to go check out other foolery.

Am I the only person that doesn’t leave a restaurant because of a screaming child? We’ll calm him down and give him…